I've been sewing away lately, but don't have much I can share.

The two quilts for a former coworker-friend haven't been delivered yet.  She had the baby earlier than I expected (not sure if I wasn't paying attention to the due date well enough or baby made an early appearance), so dad is off work for a bit.  We'll get together soon, though, and then I can share those.

Then there's the row-by-row.  I worked on that quite a bit this weekend and it's finished, but since it's supposed to be a secret and I have no idea who has found my blog by now, it's going to remain hush-hush for now.  Just know that one block had 68 pieces.  Another had 53.  But it's finished.

But the one I can show I'm kinda sad that I can show.  Last Thursday was our deadline for the AQS guild challenge quilts.  We needed eight.  We had six.  The good news is that you get to see my quilt now! 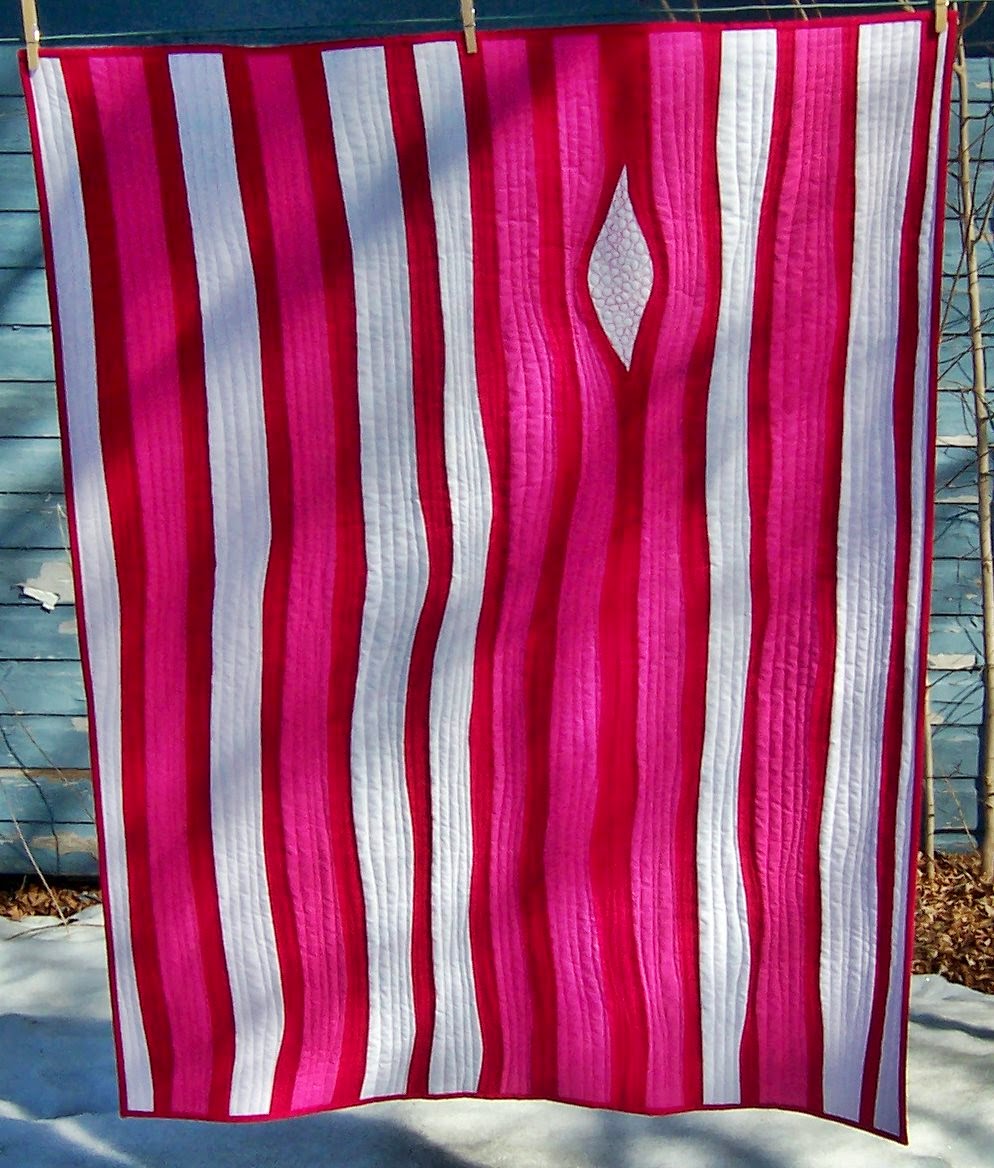 Way back in July of last year, the group voted on a theme.  Letters of the alphabet were chosen.  Anyone wishing to participate drew a letter.  I got "X".  Of course I got "X".  Why would I get an easy letter like "A" or "S"?

So the search for a science quilt project was on.

At first, I wanted to do X-ray crystallography.  It's how the structure of DNA was discovered - a woman took the photo and worked on the project, but wasn't credited for her discovery for many, many years - but other crystal structures can be determined with it.  The technique, well the images it produced, were even used as inspiration for an exhibit at the Festival of Britain in 1951 for textile designs!

But, that photo of DNA is very well known (requiring permission to use it), and I was struggling to figure out how to recreate any of the photos I found as a quilt without loads of trouble.

So I moved on.

I still have many of my college textbooks, so I flipped through the indexes of those.  X-linked traits was next up.  A good example of this is how calico cats are almost always female and the extremely rare male is sterile.  But again, how to convey that in a quilt?  A calico cat would hardly hint at what I was up to and I wanted something a little more obvious.

Xylem.  Oh, what pretty photos.  Google.  Oh, look, that stain is common.  And there are dozens of photos that all look similar.  I can make an artists recreation of this without copyright issues.  And my mom, a plant-nerd, will be proud.  (We tease that she can identify plants by genus and species while driving 70mph down the freeway - because she does!)

Xylem is found with phloem in plants.  It's their vascular structure.  (They transport water (xylem) and food (phloem).)

This should be pretty easy, once I decide which direction of cutting the stem I like better.  Crosswise creates a pattern of circles.  Lengthwise gives long, narrow vessels.  I like that idea...gentle curves.  Bright colors.  And other than those pebbles, lends itself to simple quilting.  Overall, a very modern, eye-catching design.  Something I think the judges will like - and I like, too!

But that little eye-thing (a tracheid) gave me more trouble than any little thing should have.  There should have been more, but after fighting with this and ripping parts out more times than I care to remember, I decided that this particular section of the plant stem would have just the one.

So I shared the one sneak peek...

...and now you know what all those pins were holding!

This quilt took a LOT longer than I anticipated.  Lots more pinning was needed than I was led to believe by those fantastic online tutorials about sewing curved pieces.  (Of course, their pieces were about 12" and mine were about 52"...)

The quilting went quickly, though, as you can probably guess by looking at it.  But in the realm of modern quilts, I'm confident it's got plenty!  (There's less than 1/2" between even the furthest rows of quilting, so it's kinda quilted to death...)

We had some great entries.  One gal got "Y" so she made a yucca plant.  Complete with 3-D flowers that looked real.  Another gal got "L" and did a couple of clotheslines strung between buildings in a place like New York with laundry hanging from them.  Little clothespins and all, it was so creative.  One that wasn't finished was "A" for alpaca.  The gal making it had made an alpaca from alpaca fur (hair?  whatever it was, it was extremely unruly!) and it even had a little smirk, which made those of us who know the nature of alpacas giggle - they can be quite the characters!

I considered entering this quilt all by myself for the Grand Rapids AQS show.  It's large enough, but I knew it was created with the intention of being in the guild challenge and felt it would be dishonest to claim it was made for the main show.  I know no one but me and my guild would have known, but it just didn't feel right.  And honestly, I'm not sure my quilting was good enough to even get me in.  Those darn pebbles!

And now that I've shared it here, I'm no longer able to enter it to AQS at all.  At least I think this constitutes being displayed elsewhere...

But I'm happy I participated.  I have a better handle on curved piecing.  I am a little more confident at quilting pebbles.  And another round of making a fancy hanging sleeve is never a bad technique to have under my belt.  And I followed through and completed the challenge.  On time.  (No small feat!)

Yesterday I went to a quilt show for another local guild.  There were some inspiring quilts there, but we all know you go to a quilt show for the vendors, right?  I bought two books and got to see my brother and his wife (they run a business doing custom screen printing and embroidery and were there selling quilt shirts!), so it was a good day.

This coming weekend is my guild's quilt show.  We just have a small show in the multi-purpose room at the local library, so no vendors or anything, but we do set up tables around the room and sew during the show while we display our recently completed projects.  It's fun because people can ask questions and we get to hang out and do what we love and we sometimes even recruit a member or two in the process!

But now it's time to go catch up on some housework and start getting my mind back in the the right frame for heading to work tomorrow morning.  (How many more years until I can retire?!)

I love your challenge quilt! The colours, the shapes, the quilting. Clever idea for X too. I wouldn't attempt a challenge quilt so I admire you taking this on and achieving such a terrific result.

I think that you always have the most creative ideas. And your finished quilts are awesome. I love this beautiful , colorful quilt. I sure wish there had been enough to enter the show.
Sew on.:)

Your quilt is really nice and very interesting. I love the way you quilted it. Your knowledge and all your background study for each of your challenge projects is incredible! I'm truly amazed by that! ---"Love"

I think your quilt is great! I love how you tie the science to your quilt, you make it very interesting. I love the colors you used and the quilting is pretty cool. You did a very nice job!