Today has been a bit of a whirlwind of block sewing.  Lately I've not actually been making one block per day off, but both on Sunday.  Shhh...

But today, I made two more! 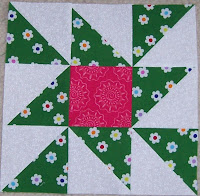 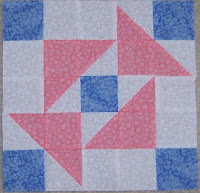 And then I kept going...

First, one of our guild members did a little lecture on paper piecing.  She loves it and members have been doing little demos on stuff they're good at, so she volunteered.  She sent us home with homework and a promise to match every block we turn in to her with another she makes.  They'll be turned into a charity quilt, so it's for a good cause. 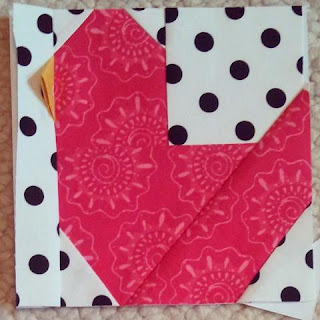 I believe the pattern came from an older Quiltmaker magazine, but I'm not sure.  If anyone is curious, I'll get the info from her.

But I should share with you who she is...because she's kinda famous now...  Her name is Colette and she's one of the members of the latest Quiltmaker Scrap Squad!  It's really fun because we get to see sneak previews of what she's done for the latest project.  She's a TON of fun.  She's the one who I often sit next to and we giggle like high school girls through half the meetings.  (We aren't being mean, please don't think that.  We're just being silly.)

And then, I couldn't stop there, right?  Our last president has requested 12" Friendship Star blocks in our favorite color for her President's Quilt.  They're not due until June or July, but I was on a roll, so I made mine! 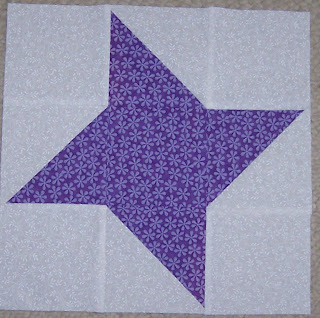 This was one I didn't even have to look up!  And the fabric is a fat quarter I bought at a show a while back and loved it.  I didn't want to cut into it, I loved it that much.  But this gal is the reason I joined the group.  She was so friendly at the quilt show they have every year that I decided this was a group I wanted to find out more about.  And the group was such fun, I joined.  When I talked to her, I had NO idea she was the president.  And I intend to stick a little note in with the block telling her just what I've shared with you.  She's a great lady and I'm thrilled to be a part of the same group as her.  And so very happy to have cut up this fabric for her quilt.

Of course, work on the challenge quilt has been ongoing.  Wednesday, I finished sewing down all the bacteria I cut out a few weeks ago... 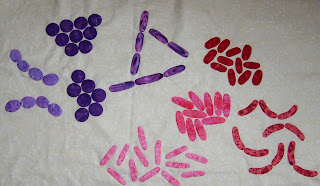 So Thursday I made more and pinned them down... 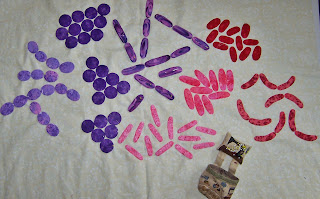 They're just pinned for now, but I plan to work on them some tonight.

And that little thread catcher there in the corner?  My aunt took the pattern and made it smaller and sent me this one for Christmas.  I've been neglecting showing it, but I love it.  It's perfect for when I'm sitting on the couch doing hand-sewing.

And that's all for now.  (Probably enough, right?)

Next weekend, my quilt group has our annual quilt show and I have 3 quilter entered: Alora's MSU Quilt, Hailey's Quilt and the Sunnyside Chicken Quilt.  I had to borrow two of them back, but I think they're worth it.  It should be fun, but it's a small, one-day show.  There's also another, bigger, show about an hour from here and I think there will be a group of us heading to that one on Sunday.  Hopefully I'll remember my camera...

You've been a busy litte bee! All those blocks are really pretty! ---"Love"

Heather's home for spring break, and I thought it'd make you smile to know that when I showed her your quilt pics and asked "What does this make you think of?" She said "They're bacteria!"

Your blocks are great! Isn't it easy to turn them out when you are on a roll? Love the chicken! It is a chicken, right? The Bacteria look interesting. Is this just a block or going to be a whole quilt? Lots of HST's. I've been really getting into them lately.

Your blocks are lovely, nice and crisp as usual. That bird one with the 3D beak is just too cute! Do you have much more bacteria to add? Did you have the amount pre-planned, or are you judging how it looks as you go along and adding as needed?

Katie, all of your blocks are super pretty. I love all of the fabrics, I am always drawn to small flowered prints. The little bird is adorable, love the 3D beak! The bacteria are growing, can't wait to see the end result. It is fascinating!

Great blocks and I can see why you wamt to call that one Pain-in-the-Butt! Glad you got to do such a lot of sewing. I'm still binding...

Your blocks are all so pretty, my favorite is the pain in the butt puzzle.
I am so happy that you found such a great quilt group. It sounds like lots of fun.
Enjoy the quilt show. I wish I could see your quilts hanging in the show.
Happy stitching