It's been another less-than-quilty week around here, but I did manage to get my two non-work-day charity blocks done.

And fix the one I made wrong last week...

Last week I showed you this block and called it Air Castle: 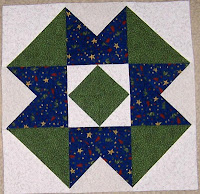 It looks okay, right?  But when I went to make the block on Saturday, the layout seemed awfully familiar.  Hadn't I made something close to that configuration recently?  Yes I had...but it was put together wrong.

This is how Air Castle SHOULD look: 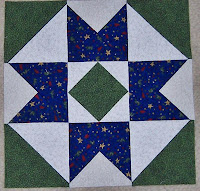 I like this way better, though the wrong way isn't bad. 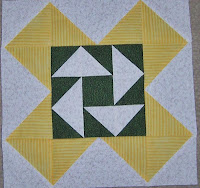 Album Star
from Quilt-Pro Systems Block of the Day

See how that layout looks similar?

And this was the only block from the daily blocks that I liked and hadn't already made.  So I went with my second choice of blocks and made this on Sunday: 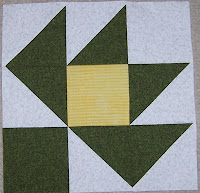 I went with this one because it was simple and I could finish it quickly.  It's getting late and I want to relax with my kitties at bit this evening.

I wasn't home a lot today because I was out buying some of these goodies: 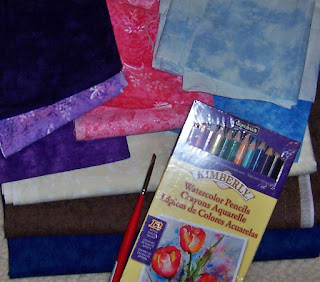 My quilt group has decided to enter the AQS Guild Challenge for the upcoming (2013) show in Grand Rapids.  To do that, we members first have to create quilts fitting the challenge parameters we set for ourselves.

My group has decided to use the word "UNDER" as our challenge.  Anything that can relatively easily be identified as an "under" will qualify.  We need to have these completed relatively soon so the group can vote on which 8 will be submitted for entry into the AQS challenge.

I thought and scratched my head a while, listened to suggestions and ideas others had and finally hit upon something I can do and that suits me perfectly: Under the Microscope.  I can share my career through my hobby!

A lot of other members are keeping their ideas under wraps and I'm not shouting mine from the treetops, but I really doubt anyone is going to steal it.  And if they do, I truly doubt we'll have two quilts that look anything alike.

So my plan is to recreate some bacteria, fungi and viruses that we've all heard of (Salmonella, Staph, Penicillium, AIDS, etc) with fabric and bring a relatively realistic representation of them to the general (quilt show-attending) public.

I'm really excited about the project.  I've had a lot of half-ideas how to do this running through my head since the challenge was announced a few months ago, but this weekend things finally came together.  I even chatted with my hubby a little and, surprise surprise, he gave me some helpful input that led things in one of the directions I'd been looking at.  (Usually he just rolls his eyes and walks away mumbling about how I'm crazy...)

So I'm not sure how much of my progress I'll show...still debating how much I want to give away...but you know you'll at least see the finished product and find out if our entries were judged into the show.  I know that last is a long shot, but those of us participating are having a good time and this is going to be rather outside my box, which SHOULD be a good thing.  (If I have little hair by the time it's done, we'll have to reevaluate that statement...)

And now, because you've read all this, here's a fun photo.  My Emma.  She's definitely her own "person"... 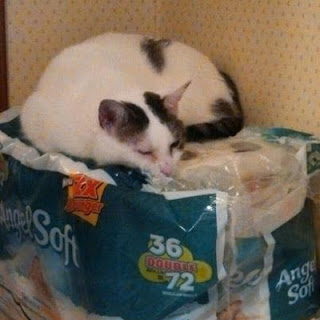 I got out of the shower this morning and there she was.  Neither my hubby nor I had anything to do with this.  And she's never decided to nap there before...at least not to my knowledge.  Right now she's patiently waiting to get my lap, so I suppose I'll sign off and go give it to her.

Your challenge quilt idea sounds great. You've got some creativity bubbling there. I'll look forward to seeing however much you can show as you make progress.

Well....All the blocks are really pretty, but of the first two, I kinda' like the wrong one best. Isn't it amazing what a difference color arrangement does for a block? Sounds like your wheels of ingenuity are spinning for the challenge quilt! ---"Love"

Your Under the microscope reminds me of some fabric that I got from Tasmania, Australia. It looks like some kind of bugs or critters. Good luck with the challenge! I'm not good at that kind of thing. Cats always have to be "ON" something.

Wow, your challenge blocks idea is fantastic! I've seen some really up-close-and-personal photos of various bacterias and viruses! Despite the fact they can make us sick, there is a symmetry and beauty to them that reminds me of snowflakes. Can't wait to see what you come up with!

Hehe - I love your challenge idea. And yep, even if anyone had that same idea, it'd come out totally different, for sure. Man, I put blocks together with turned-around pieces all the time!

Great challenge idea. I can't wait to see that one!
Emma looks like the sweetest cat ever. I would let her nap on lap anytime. (Course I would let any of the cats do that if they wanted to).
Your right way block looks great, I still like the wrong way one as well. Maybe you designed a new block.

I love the idea for your quilt! It's going to look amazing. The charity blocks look good too. Funny pussycat! I wonder what was so comfortable about that spot?