I think most of the packages have made their way to where they're going, so I can let the snowmen out of the bag... 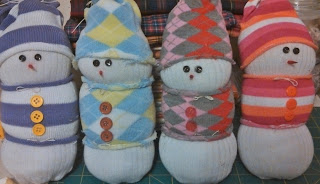 I made quite a few of these little guys and had a lot of fun doing it.  The free pattern/instructions came from the blog Then She Made...

I changed mine a little and used regular stuffing to fill them and rocks to weight them instead of rice (don't want to tempt the critters while they're in storage), but next time might try something a little different because my snowmen are rather hip-less...or something...  But by now you know me...I can't just read the instructions and follow them...  (Funny that I do exactly that at work every single day!)

Regardless, I had fun, though it was hard to cut up those amazingly cute socks.  Maybe I should have bought two of each pair - one for me, one for the snowmen?

This morning, I dragged myself out of bed with the knowledge that there was a sink full of dishes to be washed and a kitchen to be tidied (the aftermath of tin-stuffing) and Christmas presents to be wrapped.

Of course I didn't get a good photo of the tins that went to work with the hubby, but I did just take this one... 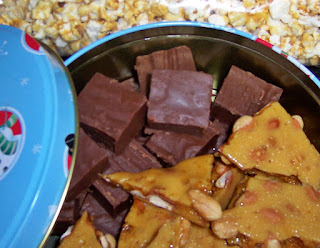 I posted the recipes for the fudge and peanut brittle a few years back.  This year, the caramel corn was a new recipe I found on Southern Plate blog.  I kinda tweaked it, as I didn't have a proper pot to pop popcorn or a hot air popper - so I made 6 bags of "light" popcorn (because everything else in the darn store had SUPER BUTTER on it) and used butter instead of margarine in the caramel and didn't use any butter flavoring because the popcorn claimed to already be somewhat buttered.

Anyways, it came out well, though a note: do not call to dispute an incorrect charge on your credit card while making caramel corn.  It will take longer than you expect which means you won't be able to properly stir said caramel corn, resulting in it being much harder to remove from the pans.  And the hubby will comment that it got "kinda broken up" - of course, he got the bottom of the bag there - wouldn't want his employees getting the bits, right?

I also tried a recipe for caramel - just plain caramel - in the microwave.  It didn't come out well enough to use in the tins - thus the caramel corn.  Now it's not quite spoon-caramel, but it does kinda flow (slowly) to fill the hole where you cut a piece out to munch on while making dinner.  Probably just needs another minute in the microwave, but I'll save that overflowing-the-bowl experiment for another day when I have more patience to clean up the microwave again.

So anyways, what really got me out of bed this morning was this:

I went to JoAnn's after work yesterday.  Decided I needed to start a new project.  I bought three things that weren't on sale.  One was 50 cents, another $1.49.  The third I used a 50% coupon on.  The gal at the fabric cutting counter told me that if I signed up for text messages, I'd get a coupon, via text, for 20% off my total purchase today.  So I did and while I finished shopping, the text came through.  So I paid full price for nothing yesterday.

But this is not one of those see-how-I-screwed-the-company-with-coupon-use posts.  I also had $50 in gift cards that were all about a year old and they're included in that "savings" calculation.  They kinda got lost in my purse.  Nice surprise to find them, right?

What did I buy?  Odds and ends to fill a sewing basket for a niece for her Christmas present, batting, and these beauties:

What will they be?  Darn it but too many people read my blog now!  I've been found and followed and I want to show more and tell more, but I can't.  So you'll see it when you see it.  Sorry.  :(

But this will be the last quilt I start in 2012.  Maybe, with any luck, I'll finish it in 2012 too?  I have to work Christmas Eve and the day after, but in exchange, I get New Year's Eve and the 2nd off.  So I'm debating about a Sew Into the New Year party at my mom's.  Or maybe just here at home by myself - depending on the roads and the hubby's plans...and whether my desire to hibernate until April gets strong enough to keep me home!  (That nasty blowing, wet snowstorm we had Friday got it started nicely.)

So what have I done today?  Well, I washed the dishes and tidied up the kitchen.  Folded the beauties I photographed above.  Made the last homemade Christmas gift.  And as I was finishing that, the hubby got up (remember he works 3rd shift) and decided he was hungry.  And needed to go to Wal-Mart.  THE last place I'd like to be this close to Christmas (though it wasn't as bad as it could have been).  So I ate lunch out.  Twist my arm.  Then home again to wrap ALL the Christmas presents.

And in all that, it derailed my train of starting something new.  Or maybe it's just the knowledge that I need to IRON (four-letter word) all that fabric I just washed before I can cut it up.

So I read for a while.
And now I'm stalling more - blogging, etc.

I think it is the ironing.

All of the little snowmen look so cute sitting there together! All the candy looks good, too. Have fun with your new project, you did great saving with your coupons and gift certificate. They still make money, so not to worry. Have a very Merry Christmas and a wonderful New Year!

Your snowmen are cute lined up in a row like that. I'm sure the caramel corn was yummy with real butter in there. I'm definitely a butter rather than margarine person (apologies to my arteries!) I hope you get to start that quilt in 2012 so we can see it earlier than later. Those fabrics look so rich, I'm sure they are about to turn into something beautiful. I do understand how that four letter word stands in the way though!

The snowmen are soooo cute! I have mine here in the camper with me. Our only Christmas decorations in the camper are the snowman, a 15" Christmas tree and a poinsettia. As always you have been busy! Merry Christmas to you and your family!

I think those snowmen more than pass muster. Your house must smell amazing with all the candy. Pity I can't be there to be a taste-tester as you see I'm qualified for the job. *chuckle* Merry Christmas ann :-)

Katie, the snowmen look so adorable standing there together. Course since I have a collection of snowmen mine still has snow friends. (and thank you again)
Your treats look very yummy!. Sounds like it is a bit messy to get made though.
Hope your Christmas was happy.
Hope you get time to stitch this week.
I worked Sunday and today , but I will be off this Sunday