has it been that long?

I should be ironing clothes for work, but it's been a crazy week (much like the week before and the week before that, etc.) and I decided to just sit down and catch up on blog reading for a little bit.

I've been bad about rememering to photograph things lately, but here are some things I do have photos of!

This Thursday was the Christmas party at my quilt group.  We were instructed, if we wished, to bring a $10 homemade gift to exchange.  It had to be homemade by us or someone NOT in China.  I think I shared the little stocking I was making (that I never took a finished photo of - I kept forgetting and had all of 10 minutes at home between work and the party that night...), but here's the unfinished project and you get the idea. 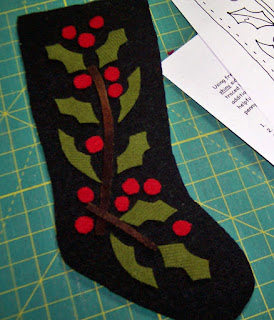 It's felted wool I got by raiding my mom's stash.  It's about 6" tall and the little berries are about as big around as a pencil eraser.  Probably not the best way to start wool applique, but since noone told me, I didn't know any better and did just fine.  I think.

And in exchange, I got this: 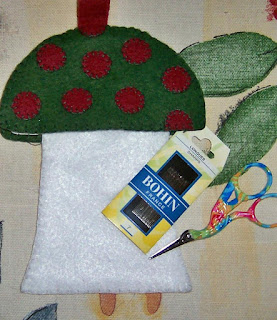 A felt mushroom needle holder.  The stump (?) is actually a pocket that housed the needles and cute scissors and under the cap are a few pieces of felt that can hold needles.  Very cute.

And it's just a little strange to me that the gal who made my gift - her mom got the one I made!

There were lots of great things given and so many ended up with exactly the perfect person, though all were wrapped and anonymous until opened.  One of the other gals who LOVES purple got a purple throw.  Our president is probably more patriotic than Love (if you can imagine) and she got a flag coin purse-type thing.  One gal got a wall-hanging-size quilt in the same pattern as a throw she'd hugely admired when another quilter made it.

It was a lot of fun.  We had pot-luck dinner, lots of good conversation, there were door prizes and we'd all submitted a favorite recipe that the gal in charge photocopied into a little booklet for each of us.  (I bet the hubby is thrilled to know he'll be a guinea pig again soon!)

And then yesterday was our montly sew day.  Well, it starts on Friday but for those of us who work, it starts on Saturday!  My sister-in-law came down to join us and she finished a quilt top (Carpenter's Star - the big single-block throw) and started another.  Me?  My project was a bit more involved (and not half-done when I arrived)...

These arcs (8 of the 24 I need) are the start of my Christmas Pickle quilt.  I only had to rip out three seams, but there were at least a dozen more I ALMOST sewed wrong.  They're paper pieced and that whole process is so backwards to me, it takes a while to figure each piece out.  And when you're talking...takes a bit longer!

I'm really excited about these arcs - they're going together nicely, but the rest of the pieces that make these arcs into a square are templates and I'm scared of those!  There are a few gals in our group who took a class and are making similar blocks, so I'm going to pick their brains when I get to that point and see if I can get these together and have them lay flat AND be square!

I wanted to come home and keep sewing, but I was exhausted and have more pressing things I need to get done.  There are a few more sewn projects I'd like to get done for Christmas gifts, but if they don't, noone will know!  We'll see.

Today was spent making a lot of goodies.  The hubby is planning to hand out 14 tins of goodies to his employees this year (down from 23 last year - new department he's in charge of this year) and he wants it all on Thursday.  So I whipped up a batch of fudge, a batch of peanut brittle, a HUGE batch of caramel corn (new recipe) and a batch of caramel (new recipe - a lot of it boiled over into my microwave...oops!).  I have caramel (or something) stuck on the leg of my pants, the floor of my kitchen is almost sticky enough to pull off your shoes and I'm probably on a bit of a sugar high from taste-testing, but other than a bunch more batches of peanut brittle and getting it all into the tins, I'm nearly done.  I'll try to remember to get a photo when I'm done.

I would have had help, but the hubby has the "crud" and took nighttime meds on accident.  He was rather zombie-like this morning and I couldn't figure it out.  I know he's not feeling well, but this was just ridiculous, so I went to look at the box.  Yep, nighttime.  I told him to just go to bed, but he fought it for a few hours and then gave up.  He was so out of it, he was no use to me and might as well just sleep it off.

Here's to hoping I don't catch it.  I wash my hands about 1,000 times a day (job training spilling over into home life!), so I'm truly hoping that helps.  He also has his own bedroom (might as well if we work opposite shifts, right?), and I'm sure that helps.

I just hope he feels better soon.  He's NOT a good patient!

I also sent the puppy quilt on its way without a photo.  I wanted to get it to the local domestic abuse shelter before the holidays, as I'm guessing this is the time of year when they most need things.  And I'm going to make it a goal for the coming year to donate at least one quilt a month.  I may not make it, but I'm sure going to try!

I was also informed at our last quilt meeting that the shelter likes donations of "other household items" and a list was read.  They like to do "birthday boxes" that contain a cake mix, frosting and cupcake papers.  You can bet I'll be watching for sales on cake mixes because I LOVE that idea.  Way better than mops and deoderant, no matter how much more useful those items might be!

Time to get back to the real world.  Ironing clothes.  Making dinner.  (I can find my kitchen - I washed dishes while the caramel corn baked - so at least I have that!)  Bleh.

You have been busy! You did a lot accomplished though, good for you. The stocking looks so cute and the mushroom you got is adorable! I'm in the same boat, I have a few things to blog about but I haven't taken pictures yet, so I keep putting it off. No Christmas stuff here this year, we are remodeling our kitchen, so I don't need to pull out the decorations in the chaos of moving everything into other rooms of the house and all the dust, we won't even talk about that. Hope you stay well and have a Merry Christmas!

I hope life settles down soon and gives you a bit more down time. This business of being too rushed to take pictures to show us what you've been creating is rather worrying! tsk tsk :)I'm sure it all looked great though. Your Christmas Pickles is off to a nice start. Can't wait to see more of that. And the edible goodies sound scrumptious. I think I need to go add to the cookies I baked this week. I could go make some caramel corn to taste test now that I have a hot air popper again...

Aww. Hope your hubby feels better soon. Your pickles look great. I know what you mean about the templates being scary. :) That part always unnerves me, too.

That stocking is really going to be pretty! I just love holly leaves and berries at Christmas! Sounds like you've been as busy as I have! I'm almost finished making candy, and I have the cans all boxed by parties, but not yet packed. I'll let my guests pack their own! (Dangerous I know!) Hope you have as much fun as I'm having! Merry Christmas! ---"Love"

Your Christmas pickle quilt looks ambitious. I can smell your goodies from here! You are such a good wife, LOL! Merry Christmas!

Sounds like you are keeping really busy. Your cooking will be enjoyed by all those who get the yummy gift tins from your hubby.
Enjoy the holidays and I hope you get more time to sew.