While I didn't finish my February UFO, I did make progress.  And my goal for the UFO challenge this year was progress - finishing is a bonus.

I started with this: 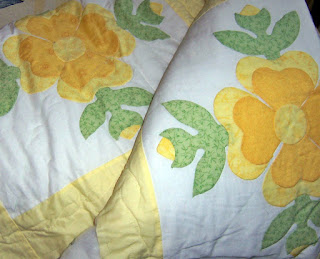 Not the best photo, I'll admit, but I had quilted cables in the sashings between the blocks and part of the cables in the border that goes around the outside.

I dug out supplies to re-mark the cable lines and finished one side of the outside border cables.  (Sorry, no photos of that...it's hard to get good photos because it's too cold outside to use the clothesline and that's my only good spot!)

But I did get a better photo so you can see part of the quilt - hanging over the longarm (which isn't in a very good position for photos either): 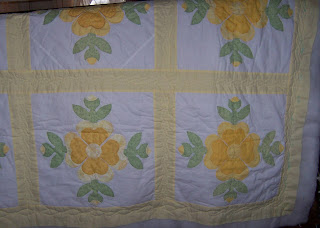 Then I started quilting the blocks because my blue marker wouldn't come out of the border where I'd marked things wrong.  Start with the center, right?  Because that's the hardest one to get to all the way around. 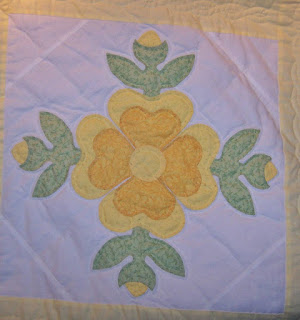 For some reason, every photo I take of these blocks comes out blurry.  I've not had this trouble with any other photos, so who knows what's going on.

Eyeballing 1/4" inside each applique piece and echoing 1/4" around the outside of the whole thing.

Then on to one of the outer but center blocks: 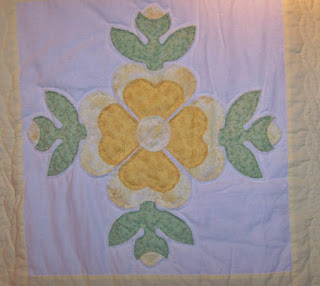 On to #3 - another outer but center block - again because those seem harder to get to overall and I might as well get them done while I've got the motivation: 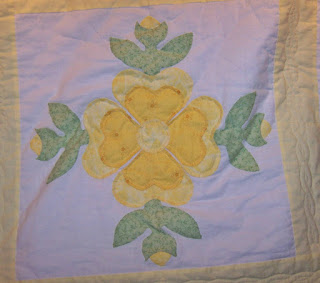 Not done, but started.

So I'm getting there.  And I plan to keep the quilt out where I can more easily get to it (and see it!) and work on it here and there for the rest of the year.  Maybe by the end of the year it will be finished.

I've learned to use a real thimble, which I never thought I would or could, but you'll not catch me volunteering for any other hand quilting any time soon!  This is definitely not something I enjoy, but I said that of applique when I started this quilt - my first applique project.

There are a lot of problems with my applique - beginner problems - and it makes me cringe when I see them and debate taking it out and redoing it, but I've decided not to.  This is my first applique project and I'm going to let it stay as a reminder of how far I've come since I started this in 1999.

In completely unrelated news, my only toilet is wobbly (old house built before plumbing = one bathroom).  My dad is coming down tomorrow to fix it (and my fingers are crossed it's an easy, inexpensive, quick fix) so I dragged our ladder out of the garage and into the house in case he needs it for whatever.  It was a big draw... 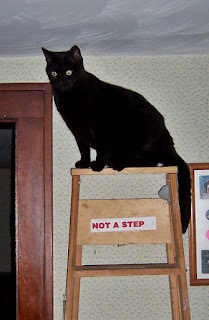 First Luka scrambled up.
(We have kinda low ceilings...) 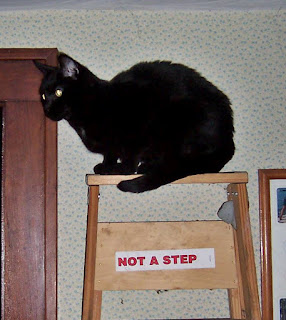 Not to be outdone by his little brother, Tucker scrambled most of the way up.  He got kinda stuck making that last step, so I helped. 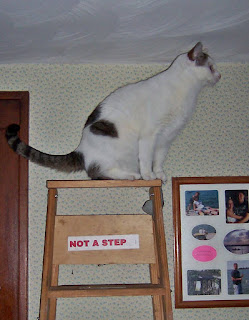 A short while later, Emma decided to have a go at it.
(Yeah those photos are of me and the hubby - from around the time the quilt featured in this post was started...I've learned to cook since then...)

Sisters Lexie and Skitter declined the challenge, but this was entertainment enough.

I can only imagine the "help" my dad is going to get tomorrow when he works on the toilet...I'll be at work, but he's been warned that Emma is an engineer at heart and wants to see how it all works and help, too.  Should be interesting since he's an engineer by training...

'Scuse me, but I had to giggle when I read about the ladder "in case he needs it"; you must have a really talllllll toilet?? (Sorry; LOL!) I still love that quilt! ---"Love"

I love your quilt, the colors are so springy and fresh! Keeping it out to work on is a good idea, as long as you can see it, you will work on it. The kitties are having a great time, hope your dad can accomplish the toilet fix with all their help! We had to put in two new toilets between Thanksgiving and Christmas. The biggest cost for them was because they are wall mounted toilets, not the standard household type. I don't have a clue as to why the house was built with wall mounts but they were buggers to replace! Hope yours is an easy fix! ! !

Oh yeah...I'm supposed to be finishing a UFO too...and I was so sure I would get February's done! Like you...at least I am making progress.

Progress is good! And some of the progress is through applique, never my favourite with thatextra layer of fabric to go through. You should definitely keep your very first applique project as is for a good reference to how far you've come. (and for the record, it looks pretty good to me!)

Crazy kitties! I'll bet they will all want to "help" today! Keep on truckin' with that quilt and you will definitely finish it.

Progress is good! I love the yellows in this--so sweet and cheerful. Thanks for the kitty smiles.

A ladder and toliet do not compute - maybe another story. You had a wonderful finish and loved seeing pictures of the cats. JudyCnNC

Any progress is good. I think if the quilt is out, you will finish quilting it this year.
I am glad that the kitties inspected the ladder so it is safe for your Dad. :)

This post was all too cute. You are doing a good job on your first applique quilt. Yes indeed leave it so you can reminded of how far you've come. I don't think I'll ever get the "feel" for using a thimble. Thanks for the smiles! Sandi

I just have to say....I LOOOOVVVVEEEEEEE this quilt!!!