I haven't gotten much sewing in this week.  Procrastinating mostly...

Today I got up planning to sew, but first had to do a bit of sewing room transformation.

This was my sewing area (minus the chair): 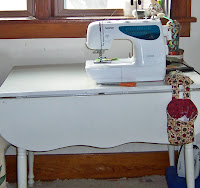 I'm using an old kitchen table and chairs.  That piece folded down in the front will flip up and make the table bigger, but my space is small, so it works better down.  But it doesn't give you much room for your legs under the table.

First step: remove the fold-down piece on one side.

Step two: new chair (I was going to get a cushion to make me sit higher, but decided to just get a new chair instead).

Not a huge change, but a change.  I did find one chair that was similar and pink and really liked it, but it didn't adjust up nearly as high and I'm very happy I chose this one - it's as high as it goes and I could even go another couple of inches if I wanted to!

So then, while the kitties enjoyed the empty box, I layed out my 30's blocks in preparation for finishing the top. 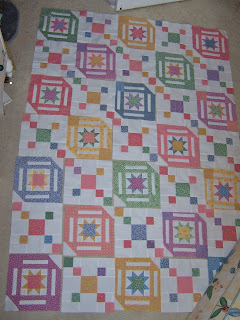 A photo without a cat in it?  Yep - they're in the box!
(My design floor isn't quite big enough - a few blocks got tucked under the edge of the ottoman!)

I sewed and sewed and took a few breaks because the hubby was home and to try to help keep my back happy.  After a few hours, I have this! 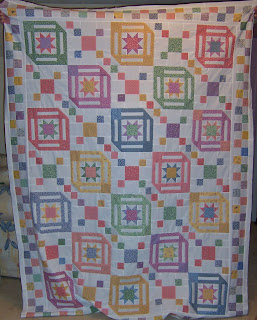 I really like it and I think the pieced border worked.  If you look closely, you'll see fabrics in the border not found elsewhere in the quilt, but I was using up scraps (and running out of scraps)!  A very 30's attitude, so fitting.

It finished about 62x82
Pattern: Rolling Along by Judy Laquidara

Now I can stop procrastinating my February UFO work and the owl quilt!

Your updated sewing area looks great! My computer table is an old kitchen table with the fold outs on each side. Someday I would like to change that! I love your quilt top, but I knew I would from the peeks you gave us. It is beautiful! ! ! If you ever decide you don't like it, I have my hand in the air going "Me,Me,Me, Choose ME" to take it! Enjoy it! Now, on to the Feb. UFO and that adorable owl quilt!

WOW - Katie!! That turned out GREAT!! I like the colors - and the scrappy border. I'm still trying to get the border on a WALLHANGING - and you go and do a whole quilt!! I repeat - WOW!! ;))

I really is so thirties. I love the star blocks, they look 3-D. Add those to the "chain" and it looks even better. Border looks cute. Didn't you say that you don't do scrappy? I'd say you do it very well.

Very pretty! All the colors have just the right values and they play well together.

yay!! I like it;) And the sewing table adjustment...whatever it takes to make it better;)
Happy Quilting!!

Having a chair the right height is essential! The quilt is lovely! I never saw a pattern like that.

I love your quilt so much I've saved the link to my favorites and will print it soon to make someday probably. I love the way the "boxes" turn from one direction to another in my mind's eye! Your table looks great, and I'm sure you'll love the new chair! ---"Love"

The border you came up with plays very nicely with the rest of the quilt. Yay for a finish! Enjoy your new sewing set up. Just a small change can make a big difference.