This week I found out my sister-in-law is expecting a girl.  She'd called it - her mom had all girls and her sisters, so far, have all had girls.  But I don't think it matters much to her, so long as the baby is healthy.

I had picked up the pattern "The Hoots!" by Amy Bradley Designs quite a while ago at a kinda-local quilt shop and was just waiting.  My sis-in-law loves owls, so it's perfect!

I went through my stash of leftovers and chose quite a few fabrics that might work and planned to stop at JoAnn's after work one day next week, but yesterday the hubby's video game system fried itself, so off we went to get it repaired.  We were so close to a JoAnn's and he was waiting, hoping it would be fixed quickly, so we stopped.  (Well, the hubby waited in the car, but at least this time I knew his impatience wasn't MY fault!)

I had a lot of trouble choosing fabrics.  The selection seemed to be quite picked over and nothing seemed to just feel right for the background.  I may stop at Hobby Lobby this week for a second chance, but they were closed by the time we got there yesterday. 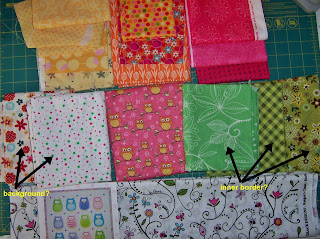 But you can help!

The yellows, pinks and oranges will be the owls.  The pink with owls will be an outer border.  The viney floral at the bottom will be the back of the quilt.  And that's the pattern in the bottom left corner.

Which background would you use?
(I was hoping for something with a bit of a print, but those dots seem too small and the flowers too large.)

And which green?
I'm thinking to use it for binding as well as a skinny inner border, if I have enough.

The pinks are all new (I had only paler pinks), but all the yellows and oranges are from my stash - some of them are fabrics I picked up on impulse and have been giving me the evil eye for a while, so I'm glad to be using them. 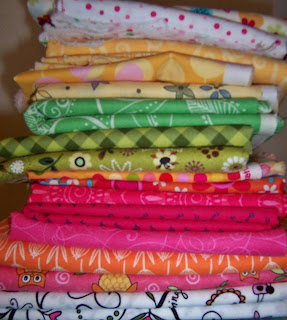 Everybody has been washed, but not yet pressed.  Doesn't that look so fun?  I want to just dive in, but with my indecision (and unhappiness) with the background fabric, I'm hesitating.

That would be the "Please Don't Eat the Daisies" quilt.  Here's where I am: 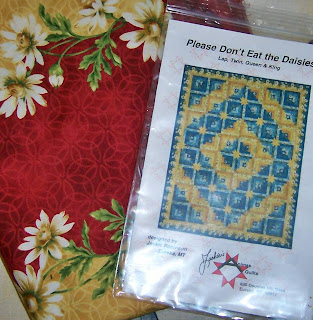 I have the border fabric and pattern.  Ummmm...there's a big chunk in the middle missing there!  I do have some fabrics in my stash that will work for these, but I think my mom's stash will also get a reduction for this project!  (I'm positive she won't complain.)

I was so hoping she'd pick something easier for the first month, but how could she have known this was one of the ones furthest from finishing?  Ah well, get it out of the way!

I've opened the pattern and started figuring it out.  It's not the easiest pattern I've seen, but there are lots of photos, so I should be okay.  I counted and it will take 80 blocks to make a queen-size quilt.  And the blocks will be 9.5" finished with 1.25" logs.  Yikes!

And just in case I don't want to work on this, I have a few new books: 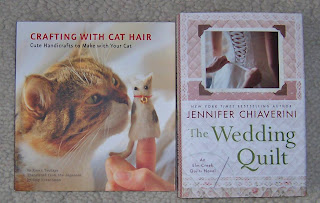 (The cat hair book was a "sort-of joke" from my mom for Christmas.  Let's see how funny it is when they all get projects from this book for Christmas next year!)

Or I can go organize some stuff: 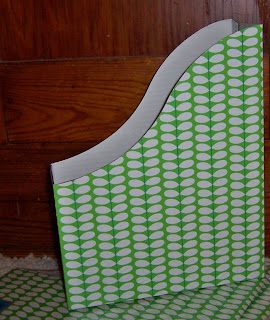 I found these at Target for $1!  I bought all they had in this print and may go find another Target to get a few more.  (So much cuter than the homemade ones I made a while ago - and filled up!)

What are you all doing on this first day of the new year?

Happy New Year Katie!!
You pack so much into one post I have trouble keeping my comments short - but here goes -
1. I love the "Hoots" pattern - and think the background should be the "viney floral" that you want to use for the backing - the scale seems right and you could always patch the back with the other stuff. And I like the first green - the one next to the pink with owls - just my personal preference.
2. "Please Don't Eat the Daisies" - looks like fun - can't wait to see it finished!
3. "Crafting with Cat Hair" - hahahahahahahahaha - I love your mother's sense of humor!! You could always make a "cat hair thread bowl"!! ;))
4. Have fun with your organizing - that always make me feel so much better when things are tidied up.
5. Happy quilting!! ;))

YOu have some fun things planned. It is always fun to plan a quilt for a new little one.

Have fun organizing, now you make me want to...and that wasn't in the plans....

Happy New Year, you are starting off with a bang! I like A Left-Handed Quilter's idea of using the pretty viney floral for the background, too. That would be so cute! My favorite green is the checked one but the green and white floral is pretty, too. Please Don't Eat the Daisies looks challenging but I love the border fabric you have and I bet it will be worth the work when it is finished. The Cat Hair book sounds so cute, can't wait to see some projects out of there. Your organizers will brighten up your space, too!

If I were choosing just a green, I'd probably choose the first one too, but for that stack of fabrics, I'd probably mix the third green in somewhere, and bind the quilt with the green check on the bias. I'd probably use the small dots for the background.
I have a bit of Jackie Robinson's first (I think) of that border stripe-type fabric, in purple with fuschia flowers. Never could figure out exactly how I wanted to use it, so it's still in the stash. I'll be watching what you do with yours!
Wish I could run onto a magazine storage bargan like that! Wow! I need them bad!
The books look a little "curious", much like a cat. *giggle*
Have fun quilting in 2012!
---"Love"

Happy New Year Katie! Love the owl quilt and you have a great stack of fabrics there. Tough call on the UFO challenge - I'd have swapped it for something easy! The Crafting with Cat Hair is fantatsic *chuckle*. We're putting away the decorations today. Oh joy! ann :-)

Gonna give me a run for the money this year, huh? I like the dots for the owl background and the first green. It's softer and looks much better with the pinks. Your backing fabric is way too pretty to hide under a quilt. Find something else, LOL! I gotta get busy!

Owls will make such a cute baby quilt! I like the dots for the background and the first green. I also like Love's idea of using the green check for bias binding. I'll look forward to seeing this one come together! The UFO challenge looks interesting too. Hmm, you're not planning any non-quilting activities this month, are you? :)

I totally cracked up about the cat hair crafts for gifts. Love that Amy Bradley pattern, Hoots. And that UFO...I remember reading about that one on your list. I almost bought that pattern and fabric years ago so it will be fun to see your progress.

What a great blog entry! I like the "Hoots" pattern, that is so cute.

Are they applique? Perhaps get a few cut out, and then lay out on the different backgrounds you have selected.

Does your camera have black and white setting? Perhaps lay out several of the owl fabrics over your selected backgrounds, and see what you think of them in black and white. Not sure how much constrast you want, but this will give you an idea.

I look forward to seeing these owls develop! What a fun quilt!