Friday night we had a niece and nephew spend the night.  They're brother and sister and, if left to their own devices, will fight like cats and dogs, so I knew we had to keep them entertained.  (Usually we try to get them one at a time.)
For the nephew (10), video games are an easy way to keep him occupied.  We have games he doesn't and the hubby enjoys playing, so they have fun hanging out together.  Sometimes we even take him to the used game store and help choose a new game.
The niece...she's almost 7 and wants to do EVERYTHING you are doing.  Last time she was over, she said she wanted me to teach her to sew "when she's older."  So I started thinking about it and decided she was old enough to learn how to use the sewing machine - with LOTS of supervision.  And what to make?  Pillowcases seem easy enough, right?
So first we went to Wal-Mart for some inexpensive fabrics.  I let her choose and boy was she fast.  I figured we'd be there an hour or more with all the choices, but nope...10 minutes tops! 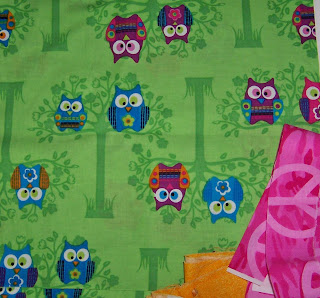 Her mom loves owls, so this fabric caught her eye.  The pink camo peace signs (kind of at odds with each other, no?) was also her choice and then I suggested the yellow because she was haing some trouble with that last choice.
I wish I'd taken photos, but the owls are the main part of the pillowcases, the pink is the cuff and between the two is a little 1" accent piece of the yellow.  They turned out very cute and even the hubby liked them!  She was so proud of herself!  I think the biggest excitement for her was when she suggested that maybe she could use them that night and I said sure...I think she expected I was going to make her put them up and save them.
But...she didn't actually sew them.  I let her practice on a piece of muslin and every time the machine started sewing, she'd jump and pick up her foot.  I think next time she'll do much better!  So far as I know, she'd never even seen a sewing machine operate before.
When we were done, she wanted to start a quilt.  It was 9:30 at night!  Maybe next time...
And a little progress report on the UFO project: 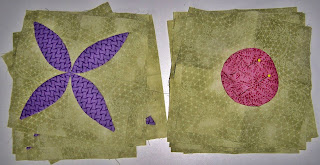 This green looks so icky.  It's much brighter in person.  The purple petals are all sewn (all 40 of them!) and I just finished prepping and pinning the 14 circles.  I wish this was the end of this project, but I still have to sew those LOOOOONG seams to put the whole top together.  I still have a good portion of the month, though, so I expect to get it done.  But I can tell you for sure that if this wasn't part of the challenge, it would probably have ended up back in the UFO pile!
Happy quilting,
Katie
Posted by Katie at 3:03 PM

Cute fabric choices by the little seamstress! She will be wanting to spend a week with you before long, so she can SEW! *grin* I have yet to see a male, young or old, that is no addicted to video games, so I'm sure that one had a great time too! I'm looking forward to seeing your purple petals quilt completed! ---"Love"

Pillowcases are a great first project, even if your niece didn't do the actual sewing, since sewing is only one step in the whole creative process. Just wait 'til her next visit -- she will be ready for a quilt, and so will you! Keep plugging at the Lavender Mist quilt. It is going to be beautiful.

She needs more practice at the machine - with Auntie behind her every step of the way. Love her fabric choices, she has a real eye for color. Eagerly awaiting the Lavender Mist quilt.

Your niece picked out some cute fabric, I love the owls! I'm betting she can't wait to get back to Aunt Katies house to sew again. Video games will always keep the guys entertained. I'm anxious to see your Lavendar Mist quilt come together, I love the pinks, greens and lavendars together.

Good for you Katie! Your niece has had a wonderful introduction to sewing. A quilt already heh? Isn't it maddening when the colours don't come out properly? We get the idea. Are you hand or machine sewing the shapes on? Ann :-)

That is a great experience for your niece! You never know what it will mean to her in the future. When I was about 12-13 I visited some relatives and one of the cousins helped me make a skirt. That was really the beginning of my desire to sew clothes for myself and I took off from there!

I bet she was one happy girl, 'sewing' and using her cute pillowcases she made with Aunt Katie. She will get used to the sewing machine. How cool that you could get her started sewing.