vacationing in the northern wilderness

This past week I've been on vacation!  Trying to keep up with blogs, but my internet connection has been iffy at best, but now that I'm home I'll share some photos and try to catch up.
We went WAAAAY north to Drummond Island, Michigan.  It's an island off the easternmost point of the upper peninsula, in Lake Huron.  The roads are paved and there's wi-fi in many of the (few) restraunts, but generally it's a remote, beautiful place. Mostly what you do up there is fish, fish and fish some more.  We took our boat (which, though legally large enough to take on the big lake, was a bit too small for comfortable use on such a big lake!) and rented a small cabin and had a great week.
Above is the view from our cabin.  Our boat is docked on the right edge of the photo, though you can't see it too well.  On the left side is the "Yacht Haven" where some very large yachts were docked for a few days - also a helipad that we saw used (and kinda rolled our eyes at the noise it made, as they seemed to be taking frequent joyrides). 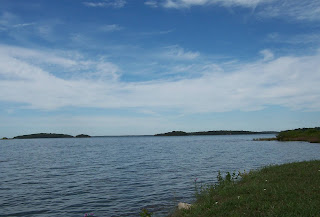 When I walked to the end of the dock area, I got an even better view of the lake.  The color of the lake changes with the weather conditions.  Part of the drive up across the southern edge of the upper peninsula, the water was a beautiful turquoisey blue, but my camera was in the back of the truck and on the way home today it was rainy and grey and hazy and not good for a photo, so that memory will live in my head, though I wish I could share it with you! 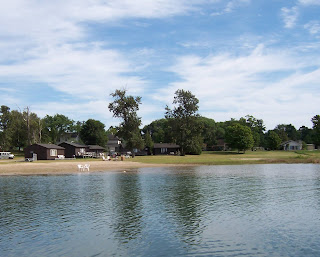 Looking back from the dock you can see our cabins.  They weren't much, but a soft bed and a fridge for cold drinks was really all we wanted.  It was really, really hot up there (as it was in the rest of the country) - hotter than normal by probably 10 degrees - and the cabins weren't air conditioned, so thank goodness for the lake!
The hubby fished every day and caught quite a few! 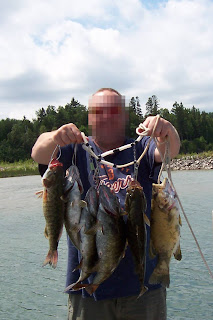 (I don't have his permission to post his picture here, so you just get to see fuzzy-headed hubby!)
Lots of smallmouth bass.  They fight like the dickens and he lost quite a few lures, but he had a blast.  He outfished his buddy, who invited us up, but it was all good because he handed them over to be smoked, frozen or added to the fish fry because we don't eat them.

And the only pike of the week, also caught by the hubby.  Others were catching yellow perch off the docks in the marina (yacht haven), but those are tiny compared to the smallmouth and my hubby likes to catch the biggies.  He had a blast.
Me?  Let's see if this photo of the cabin inside gives you any hints to how I spent my week... 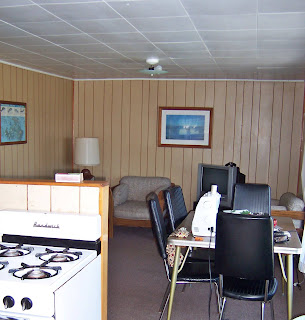 Sadly, it was so hot, I didn't want to turn on the iron, so I didn't use my machine as much as I thought I would.  I don't have photos of what I worked on yet (still unpacking!), but I'll get those soon.  I also read a lot - in the shade or in front of a fan!
Overall it was a wonderful relaxing week.  Now I'm back and have to start the search for a job again.  Yuck!
I think we'll go back next year - this time with a better idea of what we'll need and want.
Happy quilting,
Katie
Posted by Katie at 6:15 PM

Nice fish! The place reminds me of childhood vacations up north, near grande marais, MN

Looks like a good place to relax! My family would love it! The cabins look very similar to where we used to stay in Colorado, and we always enjoyed it. ---"Love"

What a pretty place. We used to go up to Northern Minnesota and catch Northern and crappies. Haven't been in years, but you made think about going again. Thanks for the pics. Connie204

Can't wait to see what your sewing project was! The location looks so inviting and relaxing. Wow! What a catch!

Wow, gorgeous pictures and really nice fish! Looks like a wonderfully relaxing vacation! I use to vacation quite a bit in northern Wisconsin and the UP. It is beautiful. It's a good break between the internship and the new job hunt. I wish you really good luck with the job search.

Looks so serene and beautiful. (well except for the chopper). Sounds like a nice, relaxing vacation. Just what I like on a vacation.
Good luck on the job hunt.

Lovely photos! I'm impressed with your husband's fishing prowess. How come you don't eat what you catch?

It sounds like a lovely, relaxing week. Good luck with the job hunt!