I know I promised photos of what I worked on this past week, but I still haven't unpacked that suitcase yet.  The important stuff (like dirty laundry) has been dealt with, but now I need a bit to recuperate from my vacation!
So instead, I have two requests for help from you, my bloggy friends!
The first is actually for my mom.  She bought some fabric a while ago (maybe as long ago as 7 years) with no plan in mind.  Now she wants to use it as sashing for a quilt and doesn't have enough. 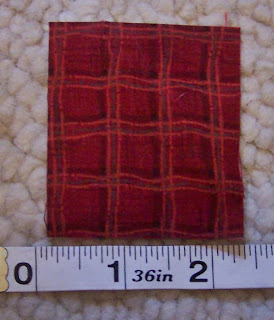 The red is a bit more brick-red than it's showing up here.  Bah, computers.
She says it might be a Moda fabric, but there are no markings on the selvedge.  (A friend of hers had one very similar, but a bit different in coloring that was Moda.)
She needs about 1 yard and is willing to pay a reasonable price for it if any of you out there have it in your stash and it matches.
Thank you in advance if you have it!
And second, this one for my mother-in-law...
My mother-in-law sent me home with this yesterday: 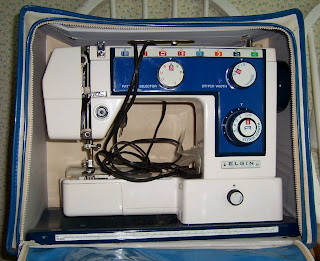 It's not for keeps, but she wants to know if it works. 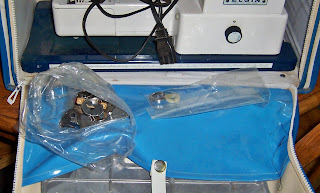 Considering this baggie of parts I found when pulling it out to see if a model number or any other sort of info was on the back/bottom, I'm going to say no, it doesn't work.  And based on the number of parts (mostly from the bobbin area, I believe), I'm going to guess it wasn't working before either - who pulls that many parts out of a machine that works?
It's an Elgin Model 4400F machine and that's where my knowledge ends.  Anyone know anything more?  The internet is a vast thing, but that makes it feel like I'm looking for a needle in a haystack!
I don't expect my MIL will ever use it (she's said as much, though if it worked, maybe she would suprize me!), but she thinks it might have belonged to her mother-in-law, so it's got sentimental value.  My hubby claims to have only seen his grandma sew on a tredle machine in a cabinet, but I wonder if maybe this machine was set into the cabinet and he didn't realize what she was doing with her foot?
She doesn't want me to fix it either (which is good because my ability to fix things is severly limited - if a good whack doesn't work, I'm out of ideas!), but I might see if I can find someone who will at least give me a quote...
But you can't imagine how fast my heart was pounding when she said she had a sewing machine she wanted me to look at...all I could think was Featherweight?!?!?  But for sentimental value, this one is probably worth more.  :)
I do promise to get project photos soon....
Until then...
Happy quilting!
Katie
Posted by Katie at 4:55 PM

Sorry I'm no help. That is pretty red fabric but I don't have anything like it.

I found this Ebay listing for an Elgin 4400 F sewing machine, it looks like yours.


It looks like you can get a copy of the manual here:

Hope that helps a bit. Good luck with it.

I don't think I've ever seen the red fabric before, anywhere. I wouldn't be much help on the machine either, but it might be worthwhile to order that manual Marsha mentioned; it might make it possible for a repairman to fix it. Good luck! ---"Love"

Well done Marsha - you make a super detective! I've checked my stash but don't have that fabric. Sorry. Ann :-)

Katie, look in the yellow pages under sewing machine repairs. Generally, places that fix vacuums usually can fix sewing machines. Judging by your pictures, this looks very much like my New Home. That would put the manufacture date in the 1970's, which means that machine is all metal and would be very easy to fix for a good repairman. Parts would probably still be available, too. It is also a free-arm portable, just in case you were wondering, and doesn't need to be mounted in a cabinet. Good luck! I'd really like to see that machine fixed 'cause it is a good one. Sorry, can't help with the fabric.

Looks like you got answers about the machine already. I do not recognize that fabric either. So frustrating to have a bit of fabric you want to use and not be able to find more.

Wow, have fun with all the parts. It looks like you have good resources to work with. I also don't have anything that looks like your fabric. Sorry. Hopefully, someone will.