Can you all believe it's MAY?  (I sure can't, which is why maybe I keep trying to write March on everything!)
Time for a new UFO...  This month Judy drew #9.
Uh oh...
That would be putting the blocks together for the Lavender Mist quilt.  Hmmm...they're not all done yet!
But wait!  I left myself a loophole!  Way back here when I listed my UFOs, I said if #9 was called before #s 6, 7, and 8, I'd readjust.
Phew!
So here's a reminder where I'm starting:

At the start of 2001, not one of those blocks was done.  The kits hadn't even been opened!  But in January, #6 was called, which was blocks 1-4 of the kit, so I've got these done.
I've been waiting patiently to find out what number would be called because I'm antsy to get started on the next assignment.  So this afternoon, after washing dishes, getting groceries, making lunch and other assorted chores, I headed up to the sewing room.  Here's where I am at already: 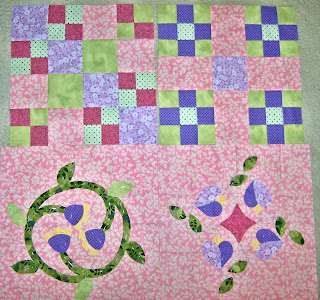 Two blocks done, two blocks pinned and ready for hand applique and (the one on the bottom right) a little embroidery.  (And those pieces that look blue to me are actually a very pretty purple, but I can't ever get purple to photograph purple.)
I looked at the two remaining block sets (5-8 and 9-12) and opted for 9-12, or #8 on the UFO list because there are two applique blocks in that set and only one in the other set.  I thought I'd get the more time-consuming set out of the way first.
And I don't feel guilty at all starting these because before I cut one template or sewed one stitch, I went out to fight the wind to get a photo of this:

Ha ha ha...just kidding, but really, if I hadn't been patient and fast on the trigger, this is all I would have gotten. 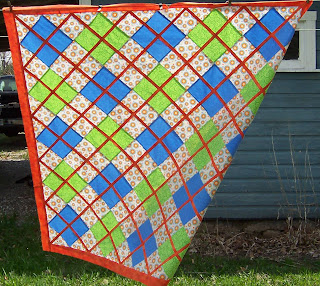 Still not the best (and pardon the dead plant stalks I still have to remove...), but it's a top!  About 50" square and large enough even without the originally proposed circle border.  I'll bind it using the circles instead.
So now I have a lineup of three tops to be quilted.  (No, I've never heard the word procrastination before...what does it mean?)
And what am I going to do?  I think a nap sounds nice.  The kitties agree.
Happy quilting,
Katie
Posted by Katie at 3:21 PM

I really like the orange in that quilt, it just sets off the other colors so well.
Your blocks are looking pretty. I look forward to seeing that top all together.

I hope you and the kitties had a nice nap :) Your blocks are looking pretty. I love the "gargoyle" quilt. I think you're right. Skipping the extra border and just binding it will finish it nicely.

It pays to be flexible. Nice start on the blocks. Thought you'd be interested to know that the *blue* looks purple on my pc screen. The quilt top looks terrific - especially that orange. Terrific work! Ann :-)

Hooray, Katie! You are making excellent progress. The Gargoyle turned out great. Love the new blocks, too.

Lavender Mist is going to be a very pretty quilt (I see purple, as well). The 'Gargoyle' quilt looks great. I am loving orange these days.

Your applique is going to be lovely! I don't ordinarily care much for orange, but it looks great in your quilt with the other colors! Nice job! ---"Love"

I agree with the others - the orange in your "gargoyle" quilt just "makes" the quilt!! Without the orange - it would be OK - but with the orange - it's GREAT!! Now I want/need to make something with orange - just because! (Yeah, right - like I need another project right now.) ^..^

Your blocks are so pretty, that will be a wonderful quilt! The "Gargoyle" quilt is so cute, the orange really sets it off!