I've started on the applique for the Lone Star quilt.  Some of you suggested leaving it as it is, but I do want an applique.  It was more of a groan that this month is so much more involved than past months have been than anything else.
So the story of the pattern I've chosen.
You remember the inspiration photo, with a Whig Rose pattern in the setting squares and triangles, right? 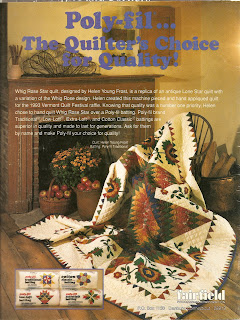 I wasn't entirely sure I wanted to do the same pattern, but I did like it.  My mom has a ginormous library of quilt books and loves applique, so I asked to borrow some books with applique patterns.  She brought a large selection when they visited this weekend, so I had lots of material to sift through.
I wanted to choose something that would not only fill up the corner squares nicely without being too complicated, but also something that could be portioned to make a nice design in the triangle pieces as well.  And I wanted a more traditional design.
"Red and Green: An Applique Tradition" by Jeana Kimball is a great book with lots of traditional applique and sketches showing variations of a pattern and a little background on the patterns as well.  (I need to do more reading from this book when I get time!)  I kept coming back to the two variations of Whig Rose and settled on this one: 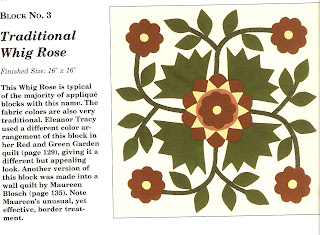 But I was having trouble figuring out how to make it into a triangle-appropriate pattern.  So I kept looking at books and then came across this Rose of Sharon pattern in the book "Conway Album (I'm Not From Baltimore) Quilt" by Irma Gail Hatcher. 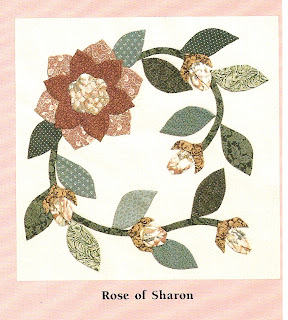 I plan to use the same center as the Whig Rose and a red flower at the end of the stems instead of buds, but this is my general plan.
As for the Whig Rose pattern, I've adapted it a little too to make it just a bit simpler to applique.  I've started and here is what I've pinned so far (with a few stems already sewn down): 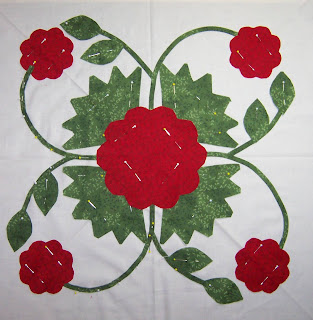 My hubby was watching me pin down the bias strips for the stems and told me he thought I was going a little overboard with the pins.  Silly boy!  I explained that I needed all those pins to keep the curve curving, but he was halfway down the stairs by that point.  (I think he was just making trouble...)
I really like it already.  That will keep me sewing on it, even if there are 3 more squares and 4 triangles to go after this one.
Happy quilting,
Katie
Posted by Katie at 7:42 PM

I think you have come up with a great solution to the design you want. It is going to look gorgeous! There are no rules that say you have to do it one way. Have fun and enjoy what you are doing!

Looking good! It's probably too late to tell you that they have bias tape on a roll that you can just iron on - huh?
^..^

Very ambitious, but I like it very much! Someday I want to do a Baltimore album quilt with applique like that. The quilt will be beautiful!

I love it;) Good luck with the applique...I know you can do it;)
Happy Quilting!!

That is going to be gorgeous with the star. I'm not sure I would have the patience to sew down those stems and small leaves.

It is looking so good. I love how you found what you wanted and then adapted it to your project. Your pieces look perfect. This will be one fantastic quilt.

It's going to be beautiful. I love seeing applique work, but not something I want to tackle. Enjoy! Connie204