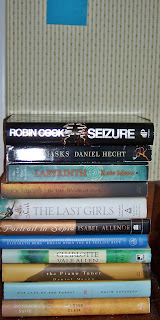 I know I say this every month, but where did last month go?
Spring will be here soon, which means less time for me to read and more time outdoors, but I made another sizeable dent in my stack again this month.
A stack that started out nearly reaching my shoulders (and probably would reach them, if we added in the extra books I picked up in October) now doesn't even reach my knees!
It's a good feeling of accomplishment.
But what am I going to do when it runs out?  I guess I'll have to actually USE that library card until the sale again on July 4th!
Now I'm sure some of you are going to wonder (again) how I get so much done.  The only thing I can say is that I don't watch much television.  If I turn it on, it's because there's a show I want to watch and I only have 2 shows I like enough to watch regularly.  (Big Bang Theory and Modern Family - both 30 minute shows.)  The hubby often watches, but I sit with him and read or work on hand stitching.  Otherwise, I'm not a neat freak (my house will never look like a magazine!) and my kitties don't let me sleep in (they're on a schedule of eating, which is okay), but nothing really out of the ordinary.  I do sleep.  8 hours a night, regularly.
Off to feed the hubby dinner.  He leaves on Sunday, so I feel like I'm at the starting line, waiting for the gun to go off and tell me to start the races!
Happy quilting,
Katie
Posted by Katie at 5:55 PM

Gosh, I wish I had your energy. I read alot and get 8 hrs, too. But I don't get half as much finished as you do. Connie204

In the last month I have checked two books out of the library and returned them mostly unread because I am trying to get a lot of sewing done. And, I am retried so I don't have a chunck of time out of my day for work. My house stays pretty neat since it is just hubby and me and no pets. I still can't keep up with you! OK, we did get the trees in the back yard trimmed and some other stuff, too, but still . . . ? ? ?

My problem is I go to sleep when I sit down to read or watch TV. As long as I'm on my feet, I'm okay and stay busy, with or without 8 hours sleep! I could never read as much as you do, and it's quite obvious I don't get as much quilting done either. But then, I think I am much older than you are! That's my "excuse", and I'm sticking with it! *grin* ---"Love"

Well done on your book pile! You do what I do. Sit in front of the TV and do something else. It is very relaxing at the end of the day.

Great progress on all fronts. Your stack of books have really shrunk over the months. I get a bit crazy when I go to book sales or even the library. So much fun!

I'm amazed at how fast you have gotten through that stack. I just picked up Barbara Kingsolver's Progigal Summer at the library and can't wait to start. It will probably take me a good couple of weeks just to get through it.