I've handed out most of the gifts, so I can finally show some final pictures!
First is the hubby's quilt.  This is my biggest accomplishment, but I don't have a good whole-quilt photo yet, but here is what I could get of it after I put it on the bed. 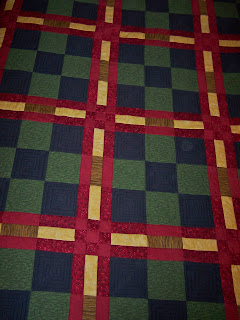 I got up at 6:30am Christmas eve morning to finish the binding on this.  He's been home the same time as me so much, I struggled to get it done on the sly.  But he had to work 6-11am Friday, so I set the alarm, got up before daylight on a day off and worked like a maniac, hoping if he got out early (there was a chance) that I'd have it done before he arrived.  A 8:30 it was finally done AND labelled.  PHEW!
I made the bed with it and put a little "Merry Christmas" note on top and he walked right by the whole thing.  How he managed to miss it, I'll never understand!  I had to send him back up to look for it, and being a smart aleck, he came back down with just the note and a quizzical look on his face.  Then he started laughing.  He likes it.
Here'a s closeup of quilting in the blocks, which I think is pretty cool. 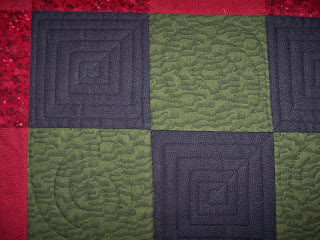 (If too many of you can't see it, I'll re-post it and tweak the lighting some more...I know the colors are dark and the thread matched the fabric.)
And on to the keychain wallets.  Here's the loot I crammed inside: 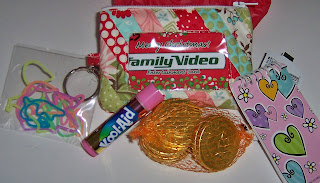 When I found the chocolate coins, I knew that was a no-brainer!  The silly bands were probably the biggest hit overall, but I think once the kids get to spend the gift certificates, they'll have some fun.
But my family didn't realize I'd made the wallets.  I mentioned something about the blood and sweat that went into making these and I got dumbfounded looks.  "YOU made these?" they all asked.  I suppose that's good, right?  They're so well-made they think they're store-bought?  (We won't go with they're so poorly made they clearly came from an inferior factory...)
And last but not least, the little ornaments that went to a couple of good friends at work. 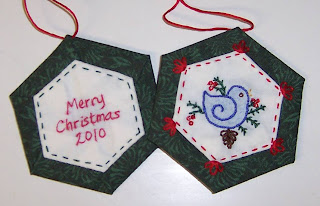 I learned a few things in making these, but my friends liked them and appreciate that they're homemade.  (And understand that homemade doesn't always mean perfect in the literal sense.)
I hope you all have had a Merry Christmas (or any other holiday you might celebrate around this time of year)!
Off to check on my banana bread.  The house is starting to smell delicious, so I think it must be almost done.
Happy quilting,
Katie
Posted by Katie at 9:50 AM

The quilt is so cool and perfect for a guy, even if he didn't see it the first time! That's quite a compliment from your family about the wallets! Enjoy! Mmmm Bananna bread sounds good.

The quilt is truly COOL indeed! The quilting is perfect! All those other goodies are great too. You did good all around! ---"Love"

He better love that quilt! It's wonderful. I love the colours and the pattern and the quilting... Your ornaments are beautiful too.

Hope you had a wonderful Christmas. I love the little purse thingys. I made some for my GD and she really liked them (especially the gift cards that went inside). I also made some of those little stockings and stuffed them with candies. Have a great New Year. I love your quilting on your DH's quilt. Nice job. Connie204

The hubby's quilt cam out great. He is going to really love it. The key chain wallets are cute and I bet those gift cards will be in use in no time. Your family should never doubt your sewing talent. (LOL) Hope you enjoyed your holiday.

I'm glad that everyone got to enjoy your hard work that went into all of those goodies;) The quilt you made for your hubby is great;)
Happy Quilting!!

Figures, it takes a man to miss the obvious, LOL. Love the quilt and so glad you had a very merry Christmas.