Not as much sewing again today and after what I've done, I think it's time for a break.
First I got busy cutting the rest of the Bliss pieces. 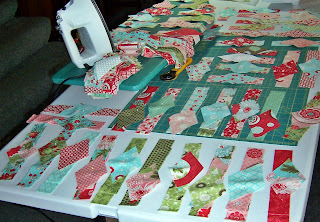 I got them all cut, but what I really wanted was the scraps from trimming down the jelly roll.  So these got matched and pinned and stacked and set aside.
To make this... 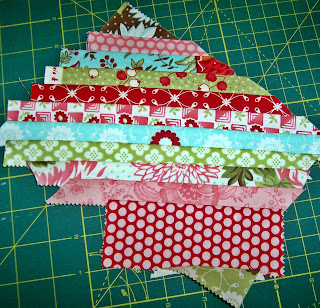 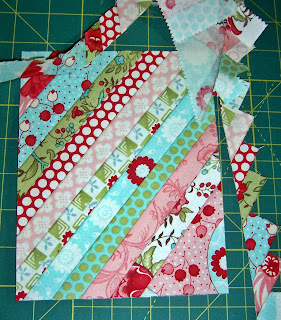 (big step missing here, but the tutorial link below has lots of photos) 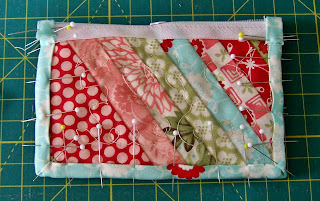 (Holy cow look at all those pins!  I caught myself enough there's actually my blood on this project!) 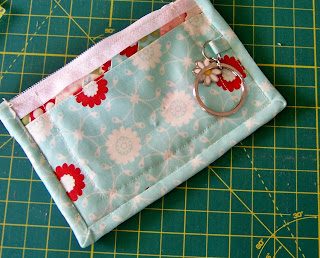 This is the inside...do you see anything wrong?
Fixed and viola! wallet! 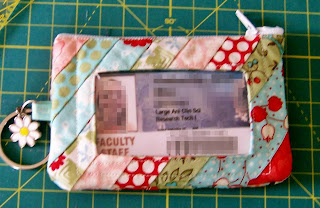 Tutorial here.
That cute little daisy keychain?  Deconstructed Dollar Tree find!
I will make a few modifications the next time.  (Yup, there will be a next time!)  Mostly that to finish the inside you use binding.  Like the kind you make to bind a quilt.  It makes the corners super lumpy and hard to turn.  I'll either use store-bought (less bulk) or figure out a different way to finish the edges inside.
But it's done.  My head hurts.  My finger is no longer bleeding, but was.  And the hubby gave up on me paying any attention to him and went to bed.  (To be fair, he worked all night, so he was bound to end up there pretty soon anyways.)
This was a lot more work than I expected, though I decided to use those 1-inch Bliss strips to make a string quilt-inspired wallet, so that added some time. I used dryer sheets as foundation pieces because they're nice and thin (and smell nice), but they gunk up your iron if you're not careful.
I think I'm going to call it a day, though part of me wants to make another and see if it goes better.  Or start sewing those diamonds into blocks.  Hmmm...
Tomorrow the hubby has a HazMat drill for most of the day, so I have one more day to sew before I really have to remove all my stuff from the middle of the living room.  He's been tolerant so far, but I think that's going to end soon.  (I do have a sewing room, but when you're home alone, it's lonely up there!)
Happy quilting,
Katie
Posted by Katie at 5:09 PM

A very cute little item! Again, it shows the versatility of the string quilt block, don't you think? Have you ever used those little clippy things that look like curved hair clips for holding your binding, rather than pins? They work great; I use them on all my bindings! Can't remember what they are called, but I got them I think at Hobby Lobby, or you can order them from Nancy or Connecting Threads probably. ---"Love"

I understand the loneliness...when I had a set sewing room, it was lonely being in there all day with the hubby in the next room, not seeing each other for hours on end even though we were both there.
I think your wallet thingy is really cute;) Looking forward to the Bliss quilt put together;)
Happy Quilting!!

The clips "Love" was referring to are called binding clips, and they are certainly easier on the fingers. I, too, am looking forward to seeing the bliss quilt put together.

Love the little wallet, I may try one for my 14 yr old GD as a Xmas gift. I also like the string quilt idea. Connie204

Really cute keychain wallet. I am going to have to go look up the tutorial. Can't wait to see youe quilt with the bliss....the parts look pretty.