I've been wanting to show this quilt for about ever now and when I realized Amy of Amy's Creative Side was hosting her Blogger's Quilt Festival again, I decided to hold off a little bit longer.  It's finally time!  Yay!
Last summer, 2009, the hubby and I travelled to the Kansas City area for a family reunion.  On the way, we stopped to visit with one of the hubby's high school buddies.  They'd lost touch after graduation, but managed to reconnect because they both work for the same company, though doing quite different jobs in very distant locations.
I was nervous to visit.  Though I'd met his friend quite a few years back and liked him, I'm not always well liked by wives of the hubby's friends.  (I grew up with two brothers and hung out with mostly guys growing up, so the finer points of being a girl are still a mystery to me!)  But I went because that's what you do when you're married.
I shouldn't have worried.  This guy's wife is great.  We hit it off and chatted like old friends for hours while the guys drove in to the friend's workplace to give the hubby a tour.
They had been married just a year before, but we didn't know at the time.  As we were driving home after the reunion, the hubby and I decided they needed a quilt.  Both for a belated wedding gift and a token of our friendship.  That was the easiest part!
Since this was for the hubby's friend, I wanted his input on the design and colors.  And since the hubby thinks that quilting is poisonous (well, not really, but he teases that way), and his ability to imagine a pattern in different colors is severly limited, I had to look through dozens of magazines to find something that came in the right colors, size, etc.
I ended up choosing a pattern called Autumn Crown, found in the October 2003 issue of McCalls Quilting.  And I planned to do it in similar colors. 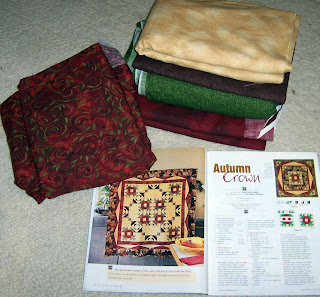 That was easier said than done.  I had a pile of fabrics and then went looking for a border print to tie them all together.  I found the swirly print above and had to put everything back and start over.  But at least I had the fabrics, right? 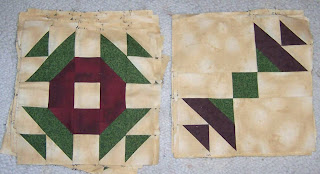 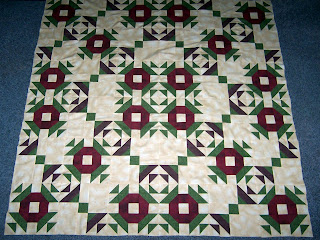 Holy cow that was a lot of points to carefully match and not sew into the seams!  And then I had to put borders on.  I don't like borders.  I don't like long seams.  I think I'd be happy if I could just make blocks and let someone else worry about making a top, but I couldn't really call myself a quilter if I just made blocks, right?  So I sucked it up and put those borders on and sent it off to my favorite quilter. 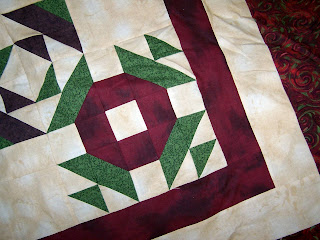 Probably about a year had passed since our initial visit to this point... 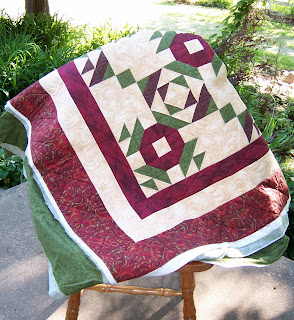 It came back from the quilter and I was in love.  She did an AMAZING job.  I just told her to do whatever she thought would fit best (wondering if quilters hate people like me or love them?) and it's wonderful.

It took me a while to finally get the binding sewn on, but I did.  But while all this procrastinating was going on, we managed to lose the mailing address of the friends.  So the hubby had to be urged to contact his friend to get it and the friend had to be reminded a few times (boys...) and we finally got it.
I was so excited to send it out, I forgot to take a photo until the middle of the night, the night before I finally had a chance to ship it.  I planned to ship UPS (you can insure things for what they're actually worth, not just the cost of materials (requiring a reciept if you make a claim) like at USPS) and have them box it up at the store.  So I packed up the quilt, my camera and the lint roller along with my lunch when I headed to work the next day.  A couple of friends helped me on our lunch hour and I got a picture.  Not the best, but hey, it's a photo, right?!
And without further ado, Erik and Jennifer's quilt: 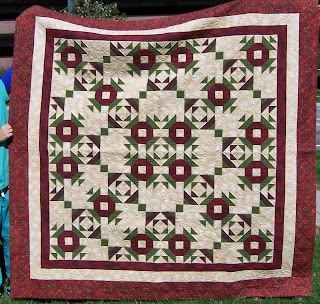 I really like the quilt, though I went through a phase during construction that I really didn't like it at all.  (I do that a lot.)  I think it's about 80 inches square...I can't find those notes...but I wanted it to be a good-sized throw quilt for them to use on their couch.
The quilt arrived, but it took more than a week for the hubby to get confirmation from his buddy that they'd actually gotten it.  (All of this communication goes through work e-mails because both the guys work wierd shifts and it's just easier that way.)
So there you have it.  Finally finished and shipped.  And thank you to those of you who made it all the way through the post.  The quilt had a story and I wanted it told.  Sometimes I get a little wordy...  :)
Happy quilting,
Katie
Posted by Katie at 10:11 PM

Oh Katie, it is just beautiful. That was a lot of points to match. But you did a beautiful job. Hope they love it!!

The quilt is truly beautiful! Your hubby's friends surely will love it and you for such a nice gesture. You're right; your quilter did a super job! ---"Love"

This is such a pretty quilt;) I didn't know you don't like borders. And the quilter really did do a great job;)
Happy Quilting!!

Wonderful story, but absolutely gorgeous quilt. Such talent you have.

That quilt is a stunner!!! You did an awesome job on it and I know they will love it. What a gorgeous pattern and the colors are beautiful! Neat story too.

Simply beautiful!! Love the colours too!

That is a beautiful quilt! I would have had a hard time giving it up. You did a great job and it is a great story, too.

Love your pattern and the colors are beautiful and "HOLY COW" you did a great job. What a wonderful gift. Love Lois

Lovew the quilt! Hey, I am in the area. I am hoping to hit a quilt shop two. You interested?

it is beautiful! just beautiful. In the column of WIW(whatever its worth) the quilt is beautiful without the border too!

I'm sure the friendship will strengthen because of the quilt. I love stories like this

I remember the pictures of this beautiful quilt in progress. I love those jewel tones and you did a superb job with all those points. Great story too, but I bet you had a tough time parting with this one.

Katie, this is a very generous gesture of friendship! Love the story and the quilt. Thanks for sharing!

What a wonderful story, not too wordy at all! The quilt is beautiful, you're right about all those points! I know they'll treasure it forever.

What a spectacular quilt, Katie, and a lovely story too. Very inspiring.

Beautiful quilt and story! Erik and Jennifer must have been excited. The contrast of the light background and the colors of all those points really makes the quilt pop. Thanks for sharing.

I like your version better than the magazine photo!

what a beautiful quilt! I love the colors, which are perfect for that pattern. And what a wonderful gesture to make this for your hubby's long-lost friend. I bet they were thrilled to receive this treasure! BTW, I'm with you when it comes to borders and sashing - not my favorite. But some quilts just need them!

What a nice quilt with a nice story to go with it!

Beautiful quilt! Very nice of you to make such a "pointy" quilt for friends!

It turned out absolutely beautiful. They will love it. Connie204

What a great gift! Also, thanks for stopping by my blog :)

Gorgeous looking quilt. It would look great in my front living room :)

It's wonderful! Loved the story!

That's a beautiful quilt and I love the colors. If you can do all the points in that you could easily do the paper pieced flying geese circle. Thanks for the comment and compliment on my quilt it was very appreciated.
Kelley O