and then there were tops (day 2)

Off to a flying start again this morning.
First, more work on the basket weave quilt.
Before: 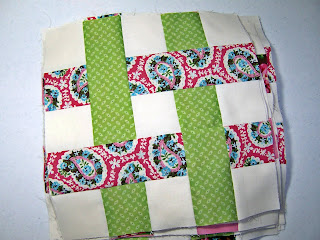 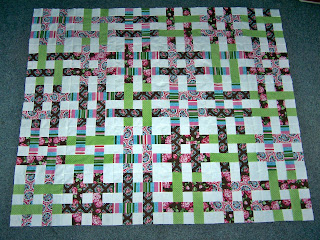 It's about 50x60 and definitely needs borders, but I'm not sure what.  I have more white and about 5 strips of each print left (there were only 5 prints total), but we'll see.  I'm going to think on it some.  Maybe some asymmetrical borders, like with flying geese going around one corner...  And I'll ask my mom.  She'll be here tomorrow.
Then on to the hubby's quilt.
Before: 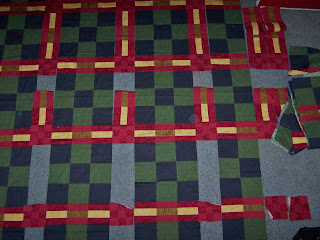 I had run out of the reds the last time I was working on this.  I bought more, but it got put off indefinitely because the hubby seems to ALWAYS be here when I have time to work on it.  It became a high priority this week.
After I got it laid out and did some figuring for what I needed to cut and sew to fill in the holes, I decided to break for lunch.  About that time the tornado sirens started going off.  Seems the crazy storm we were having was capable of producing tornados!  Wierd weather for sure.  So I went to the computer to get radar images of the storm (satellite TV is great in storms...) and just around the corner, within a few feet of me but not quite in sight, was my design floor.
Apparently we had an indoor tornado today. 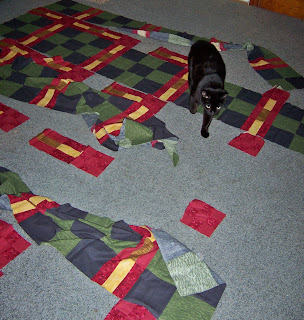 Yep, that's the culprit right there.  But he has such a tiny mew, I thought he was elsewhere in the house, bemoaning the storm or scolding a naught catnip mouse.  It got worse after the photo, but I didn't straighten it up until I was ready to work again.
So I guess maybe that was a Luka-nado?
But I got busy sewing and he got busy napping and here's the finished top!  (With a splash of sunshine that followed the storms!) 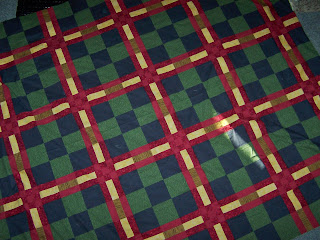 I had forgotten how LONG those seams can be on a queen size quilt!  I still have to get fabric for a back and I have 7 extra big 9-patches to use.  (Seems I can't count well - I had way too many big blocks and not enough sashing blocks...)  Depending on where my mom and I end up, I'm kinda hoping I can send the whole thing home with her to drop off at a quilter, as she lives much closer to my mom than to me.
And then I started on the origins quilt...
Before: 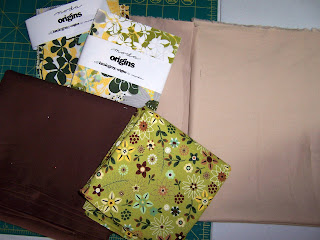 I almost forgot to get a photo before!  There's a few of the tan strips cut, but I think this still shows the before quite nicely.
I sewed a while, but didn't get far on this tonight.
After: 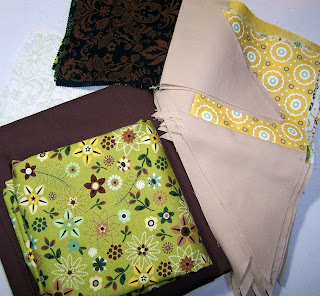 I ran out of tan (I need 7 more triangles, ugh) and it's getting late.  Next step is to lay out all the squares-turned-triangles and since you've seen the results of a Luka-nado that occurred mere feet from my awake person, I can't imagine what might happen while I slept upstairs!
Tomorrow I will work on this more and maybe get some more tan.  It's a Kona solid and I understand they run pretty consistent with colors, but I bought the end of the bolt...  But if my mom wants to stay in and sew, we'll do that.  It's what I was planning to do and since this quilt has nowhere it needs to be, I can put it aside for a while and work on another project.  (Because you all know I have just a couple others to choose from...)
And now, Netflix has sent "It's Complicated" and the Luka-nado is trying to turn my lap into hamburger, so I guess it's a good time for a movie!
Happy quilting,
Katie
PS  No actual tornado was spotted around here, to my knowledge.  No damage either, as far as I know.  The nastiness blew through here really quickly - so fast that about the time the sirens went off, it was mostly through already.  We didn't even lose power, which was my biggest fear.  (What a waste of a quilty day, right?!)
Posted by Katie at 8:50 PM

You've had a busy day!
Everything is lookin great!
Glad you didn't have storms!
---"Love"

You really got a lot done today!! I got a little worried when you started talking about indoor tornados.... but I laughed when I saw Luka. He really did make a bit of a mess.
The basket weave quilt looks fantastic, I love the colors and I love how intricate it looks.
The hubby's quilt looks great. He is going to love it.
Your hst are looking good. Can't wait to see what you get done tomorrow.

Wow! Forget about 'Wonder Woman', I think you have a bit of 'tornado' in you. I LOVE the basket weave quilt, and the quilt for your husband has the look of a tartan. I can't wait to see what you come up with tomorrow. (You make my efforts look downright pitiful.)

What a prductive day;) I really like that basket weave one;) I made a quilt for my hubby, and was able to keep it secret until he found the scraps of the fabric laying under my sewing table;)
Luka-nado...love it!! Oscar "tap dances" on my quilt work when he feels I should be paying attention to him instead;)
Happy Quilting!!

Love the basket weave, love the hubby's quilt and I'm intrigued by the Origins project. Love the kitty too :) I'm glad tornados were limited to the feline variety.

Your basket weave quilt is very nice, your fabric choices really make it pop. I couldnt' but laugh over your "Luka-nado". I had a "Thunder" storm yesterday. He too is a black kitty, and he did practically the same thing Luka did. But I didn't snap a photo, was to in the "moment" of getting the quilt top done. Hoping today it will be at the same stage as your basket weave - done, except the borders.

Have a great quilty day!

Wow! You got more done in a week than I often get done in a month. Keep at it. I'm excited to see all you finish this week.

Came here for the festival but looked around b/c I am NOSY! Love your stuff..what color of "tan" is your background color? I am needing to buy a solid to go w/ my origins charm b/c I am doing a tutorial for a Single Charm Pack Lap Quilt and I like the color you are using and I keep forgetting to bring my charm pack to the fabric store for matching. What tan fabric are you using?