They're done!  All 6 dolly quilts I started are done! 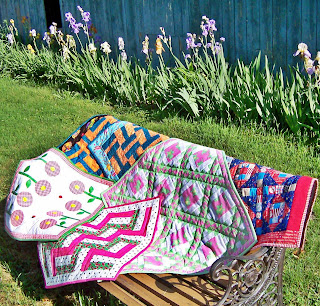 There's a second Raggedy Ann and Andy quilt from fabrics Mary sent me: 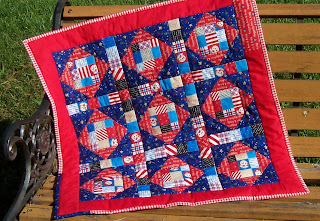 It's still busy, even in the sunshine.
There's Double Irish Frogs II: 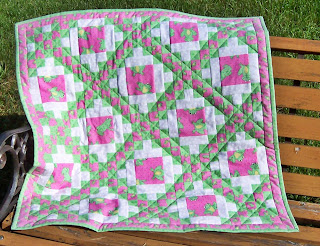 There's Watermelon Fence, which I love more every time I look at it: 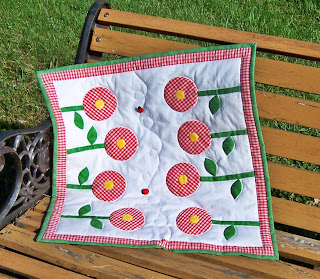 I adore this one and will have trouble parting with it.  And I hope those ladybug buttons don't cause any trouble with little ones...
There's brights bordered with VW bugs: 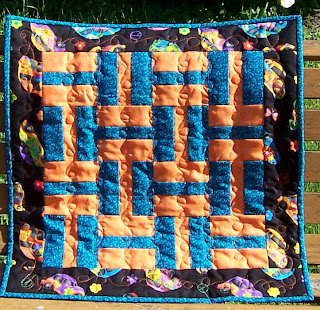 And last but not least, the one made to go with the doll, another brights, but with popsicles: 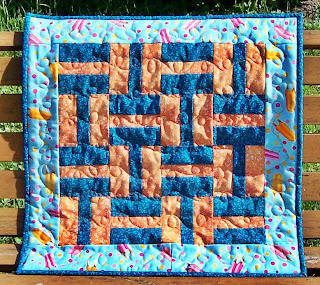 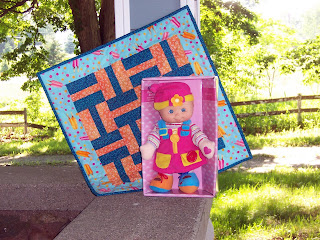 Tonight we're having some family and friends over for a cookout.  The weather is beautiful and we couldn't have asked for better on a holiday weekend.  I hope to have some quilty time, too...
Some of the blooms my guests will see (because I just have to add more pictures!):

The columbines started out as a purple and a double pink.  They reseed and grow like weeds, but look at the vareity of colors I'm getting.  Sadly the double one didn't make it last year. 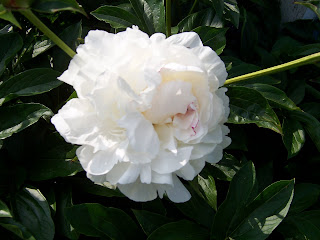 This peony came from my grandpa (my dad's dad) and my parents literally had to haul it out of the ground by tying it's root ball to the car when they moved my grandma out of the house!  It's almost entirely white (little hot pink streaks at some petal edges) and smells wonderful. 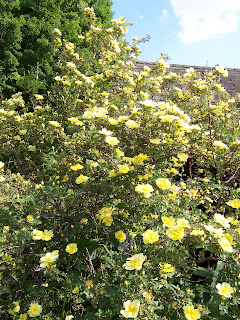 This crazy rose bush (it's taller than me!) was brought over from Germany by my mom's ancestors when they immigrated to the US probably 5 or 6 generations ago.  I've been told it's probably a Yellow Rose of Texas by a friend/rose officianado, but I responded that the Yellow Rose of Texas should then rightly be called the Yellow Rose of Germany.  Starts of this have been given to any family member interested, but I seem to have the greenest thumb, as everyone claims it's hard to get started.  I had no trouble, but planted it next to our chicken coop (no chickens - hubby says they're dumb and stinky), so maybe chicken poop is the key?  But once you do, look out!
The flowers are so pretty - very old-fashioned, which I love: 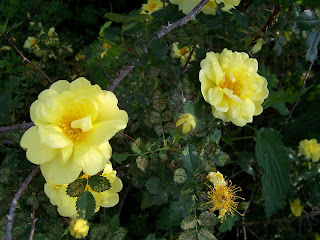 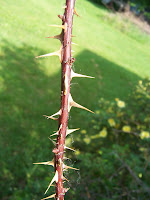 I don't blame him - look at those thorns!  They seem to reach out and grab you, too.  My Great Aunt Helen used to swear hers tried to rip her clothes off every time she mowed near it!
And finally, some irises I rescued from a friend of my mom's: 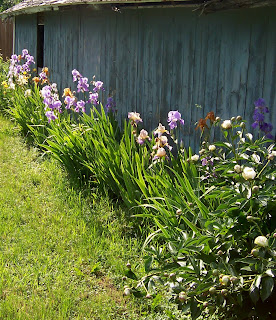 She was moving and the house was going to be bulldozed to turn the land into a golf course.  Anything left behind was a goner.  They're "old fashioned" irises - no fancy hybrids with huge petals and deep colors, but I love them just the same.  And with a 100+ year-old farm house, these fit right in!
Happy quilting,
Katie
Posted by Katie at 12:27 PM

The doll quilts are adorable! Love the flower pictures too. We used to have peonies on the side of our house. I wonder if they are still there (my sister lives there now - I'll have to ask her). It's really neat to have flowers that come from family!

Yay! for the doll quilts. All of them are really fun and I'm sure they'll be well loved.

I'm drooling over your garden. You've given us so many little peaks in various posts, I imagine it must be gorgeous all together. And a 100+ year old farmhouse to go with it? And family plants with history. I'm a little green with envy over here :) Thanks for sharing the pictures.

The dolly quilts are so very adorable and the doll is a perfect match to the bright quilt.
Love your flowers. (Maybe you could send me some chicken poop since I have trouble with plants...LOL jus kidding). Whatever you secret is the garden looks great.
Enjoy your weekend and hop you get some quilty time!

The quilts are great! I have columbines.
Don't worry your doubles will turn up again, they're in the gene pool. Have peonies, too. They were way established when we bought our house 30 years ago. Same for two rose bushes, one white and one pink. They bloom profusely and grow to over 6 feet tall every year. And irises, purple and yellow, just plain like yours, from my mom. They were in the yard when my parents bought their house 50 mumble-mumble years ago. I love old flowers!

I love antique gardens. The first place my husband and I lived together had a garden that was started in the 1940's...beautiful. Sadly, the new owners tore it all out and let everything else die off. We got married in that garden.
Your doll quilts are too cute;) It's good to see so much stuff getting done in these hectic times;)
Happy Quilting!!

Job well done on the dolly quilts. They are fantastic! I like the lollipop one the best. Your blooms are so beautiful - especially the peony. Ann :-)

What a cute pile of doll quilts! And your flowers are truly beautiful! I too have iris and perennial phlox moved with me everytime, from my mother's home some 40+ years ago. ---"Love"

How lucky you are to have those wonderful plants from family. The peonies are beautiful this time of year. The dolly quilts are adorable. Connie204

I guess farmers must work from sun up to sun down? Look at all the stuff you got done! What beautiful little quilts. :) Theri