I couldn't resist - all those fantastic prizes and new bloggers/quilters to discover...
Some of you know already, but there's an online quilt show going on, and Amy, the coordinator has asked quilters to post a quilt and it's story. 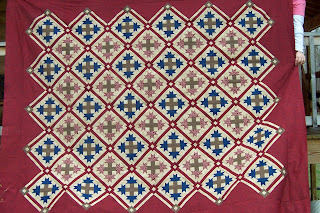 (I wish I had a picture of this quilt after it was quilted, but it seems I can't locate that one.  It WAS quilted and bound before given away!)
The story:
This quilt was made as a raffle prize for a fund raiser for my hubby's family's Relay for Life team in 2007.  The team was created after his maternal grandfather passed away from cancer.  The family felt they needed to do something to help others from facing the same sadness, so they joined and walked.
Being a quilter (and slightly crazy), I offered to make a quilt, assuming it would attract attention and earn more money through the raffle they were holding.  I decided a queen-size would be nice because it could be used on a bed or wherever.
The pattern was in McCall's Quilting magazine, February 2007, called "Star Crossing" by Sandee Wachal.  It was done in red and green, but I felt that looked too Christmassey, so I changed it to red and blue.  It seemed fitting, too, because Grandpa was always running around in an American flag baseball hat, carrying his American flag folding chair to get-togethers.  He was also a war veteran.
Sadly, the raffle didn't do as well as I had hoped, but that's a whole 'nother story and nothing I want to drag around here.
What I learned:
1. Raffle quilts are a LOT of work for little satisfaction.  Smaller is better.
2.  There are a LOT of pieces in this pattern.  Look before you leap!
3.  Setting triangles that are too big are confusing...  Thanks mom.  :)
4.  Queen size quilts are really, really big.
I didn't like all those little pieces, but I love the quilt and had a little bit of a hard time parting with it when the time came.  I still have a few scraps from the quilt that I use in special projects.  They will always remind me of this quilt and Grandpa.  He was a fiesty old man up until the very end of his life.  He lived at the local Hospsice house for the last 7 months of his life - a month longer than the doctors told him he would likely live when he was initially diagnosed.  I honestly believe he lived that long just to prove them wrong!  And I am so glad that I got to know him a little.  Just thinking of some of the things he did make me smile (like the day he showed up to "supervise" our new roof being put on at 5am - before daylight - and wondered where the roofers were?).
I know some of you have seen this before, but I wanted to share a quilt that had special meaning and I think this one qualifies.
Now it's time to go check out some more of the other quilts and blogs!
Happy quilting,
Katie
Posted by Katie at 6:09 PM

Your quilt is beautiful. I am sorry you did not make more on the raffle. Not everyone knows the work that goes into a quilt and the value of it. A beautiful story behind it though.

This is a beautiful quilt and a great story about your Grandpa.

A beautiful quilt! I know what you mean about raffle quilts...most people just don't "get it"!

That is a gorgeous quilt and a wonderful story! My experiences with donation quilts have not been the best either; remember those three firemen themed quilts I donated last year? After they left my cousin's hands, we never heard a word about how they did! ---"Love"

Wow! There are 600 quilts in the Festival and yours is a worthy addition. Your motives were good and your work on this quilt definitely merited more praise. It's a wonderful quilt and you put so much of yourself into it. It's difficult to get a return on that kind of investment. Ann :-)

Another fellow APQ'r had posted one of her quilts on the Quilt Festival, and I have checked out a few of the blogs.

Your grandpa's story and quilt are a treasure to hold. Perhaps its not how much the raffle made, but how much the quilt meant to your family and their "need to do something", is the reward? But as others have mentioned, sometimes the raffles do not seem to be quite as beneficial was we hope!

I loved your story!

What a nice story. The quilt is wonderful. I have to go take a look at the festival. Connie204

wow--that is a lot of work for a raffle, but the idea behind it is a wonderful one. so many pieces to that quilt. i can see where it would be nice in Christmas colors--or any combination i'm sure. thanks for sharing. come visit my site: http://fligamapoof.blogspot.com/ i'm having a little giveaway this week

None the less....you did it and sometimes the energy you expend and the love you share makes a few go rounds before there is any evidence. Impressive sewing and perserverance.