aftermath of my sewing tornado

I've been meaning to post a few pictures of the aftermath from my week of vacation and sewing tornado, but keep forgetting.  Since I have little else to share (working on binding dolly quilts), I thought I'd share these...
Used up thread: 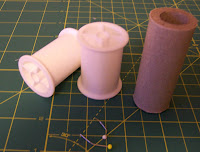 There are two broken (yes, broken) pins in there, too.  The needles made it through the fiasco in one piece, but had to be replaced.  That cardboard spool?  Started with 1200 yards.  I didn't use it ALL the week I had off, but a LOT of it, then ran through one smaller one of 200 yards - all white.
Then there's the poor ironing board cover... 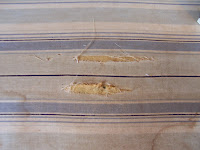 I actually used it so much, I wore holes in it.  It was probably 4 years old or more, but I've never actually worn out an ironing board cover.  Today I bought a new one: 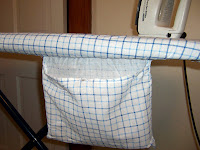 That little pocket is attached.  It was packaged so that the cover was inside that little bag.  Though I think it's pretty cool (both to have and have been packaged that way), I'm not sure what I'll use it for.  I'm sure something will come along...
Then there's the trash bag... 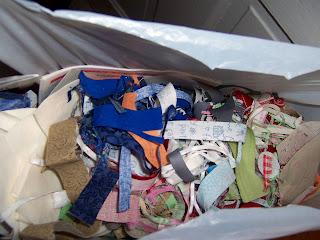 Little skinny strips, for the most part.  Not useable unless you're a little, no, a lot, crazy!
Saturday my sister-in-law came over and we went to a small quilt show and I picked up a few goodies from the vendors: 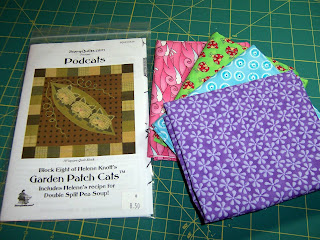 $1 fat quarters!  It was hard not to buy whole bins, but I just depleted my scrap bin a little, so I didn't want to fill it back up again!
And the "Podcats" are absolutely adorable.  There was a whole set of these with cats made from veggies...avocado, eggplant, etc.  This one screamed at me and it was the last one so I bought it.  I think my sister-in-law might make it, too.
I also bought a book written by the speaker (we didn't last long enough to see her speak - long story).  It's for my mom's birthday and had the author sign it for me!  I'll show a picture soon, but in the unlikely event my mom finds this blog, I don't want to spoil the surprize.
When I get the bindings finished on the dolly quilts, I'll show them.  The machine-sewing portion is done, but the hand portion takes a while, as you all know!
Happy quilting!
Katie
Posted by Katie at 8:06 PM

You used your time well and really accomplished a lot with your "vacation". Love your pictures! All of your goodies look like lots of fun, really pretty fabrics! The cats are cute, can't wait to see the finished product!

You've certainly been busy. Look at all those spools! Those pod cats are cute! :) Christine

I'd bet that little pocket will come in handy for all the threads you clip off your blocks at the ironing board. Seems to me you are getting things back in to fine order, ready to start another project! ---"Love"

Wow, that's extreme quilting! Sounds like a good excuse for a little shopping. Such a sweet pattern and terrific fabrics. You were very controlled to stop at so few. I know I would have been tempted to grab handfuls at $1 each. Cheers, Ann :-)

I've seen those kitties around....very cute;) Fat quarters for a $1???? I would have gotten more than what was called for;) "But hubby, they were a REALLY good price!!"
Happy Quilting!!

I like that pocket on your ironing board! Good idea! Maybe I can make something. It would give me a place for all the pieces of thread that I get off a quilt that I'm ironing. And I love that Cat pattern - I have never seen it before!

That cat pattern is cute, I have never seen it.
Great fat qaurters,but I would have gone way overboard.
Now I gotta laugh because your ironing board cover is the same one I just replaced a couple of weeks ago. Mine didn't haved holes yet, bt it was really ratty looking. Then I kept scrolling down to see the new cover and it is thesame oneI just got, pocket thingy and all. I put my pressing cloth in it. I guess we have twin boards hu?

The Podcats are really cute. I got tired just reading everything you did. $1 fat quarters, wow. 4 years for an ironing board cover. I think I go through one every year. Especiall if I use fusibles and I do alot with the purses. Connie 204