I decided to make a pie...apple pie using my mom's recipe.  I know, I know, it's not apple "season" but this sounded so good.  Hot out of the oven: 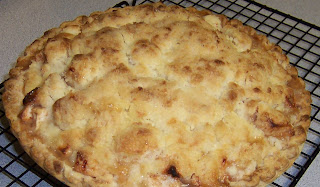 The recipe came from the newspaper many, many years ago...I can't give credit where it's due because I'm sure the original is LOOONG gone...  It said to cook it in a paper bag, but I didn't.  My mom used to.  I've done it when they were easier to come by.  My grandma tried and I think said a few choice words to my mom when it lit on fire...
The recipe:
about 6 pie apples (I like Red Rome)
1/2 cup sugar
2 tsp. flour
1 tsp. cinnamon
1 deep dish pie crust
1/2 cup butter, softened
1/2 cup sugar
1/2 cup flour
Peel, core and cube apples.  Sprinkle with lemon juice.  Add 1/2 cup sugar, 2 tsp flour and cinnamon.  Toss to coat.  Dump into deep dish pie crust.  Mix butter, 1/2 cup sugar and 1/2 cup flour with pastry blender (or fork) until crumbly.  Dump on apples, pat down.  Bake at 400F for 45 minutes.
I also sprinkled a little instant tapioca into the bottom of the pie crust before adding the apples because it's always a little runny.  I've never done it before, but I hear it's supposed to help.  We'll see...
What I was doing while baking pie: 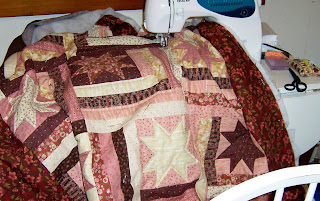 I quilted 1/4 inch inside each star.  I bet you're all snickering.  I think my mom was too when I told her my plan.  It's not that big of a quilt, but jeez oh pete socks...what a lot of work to move it around every few inches...  Now I'm just doing 1/4 inch in on the log cabin "L"s...that's a little easier!
I'm kinda suprized no kitties showed up to be in the picture, but one was sitting in the window directly behind the table.  She just didn't make it into the picture - you wouldn't want to see the mess between her and the quilt anyways!
Katie
Posted by Katie at 8:28 PM

Looks delicious! I love your quilt and all that turning and smooshing and pulling will all pay off. The quilting will be gorgeous! :) Christine

Mmmmmm, yes please...I'll have a slice with some icecream. It's no fun twisting and turning the quilt about. QUilting on the *L*s will look terrific. Happy Stitching, Ann :-)

I remember using the paper bag to cook the pie! The bag never caught fire, but it did sometimes get a little crispy... The theory was to seal the bag with staples or paper clips so that the drippings didn't mess up the oven and the steam helped cook the pie. Yesterday I took the easy way out and bought a cherry cobbler at Bob Evans. Yum... Mary

I love the colors of the quilt....looks good enough to eat;) And for the apple pie...must be something in the air because I was thinking of making one these last few days;) Maybe I will try your recipe;)
Happy Quilting!!!

The quilt will be beautiful. Taking the trouble to quilt in the stars will be worth it. Perhaps I'll try the apple pie recipe. I have some paper grocery bags - did the recipe say to moisten the bag, or just put the pie in and pop it all in the oven? Of course I may chicken out on the bag idea, but I might not... -Joanne

Your quilt looks fantastic. Can't wait to see the finished project. The apple pie looks great. I haven't made a pie in a while...mmmm maybe I'll have to try your pie.

Katie, Not sure if you saw my reply to your post on the Fiesta quilt. I put the webste there for you, but if you want my boss said she can still get the pattern... so if you want it let me know my email is friendrn54@yahoo.com.