in just one week!

Lately it seems the quilts I've been making have not been amenable to chain-piecing, which makes them take a lot longer.  Last week with the Cabin Fever quilt, I changed that trend! 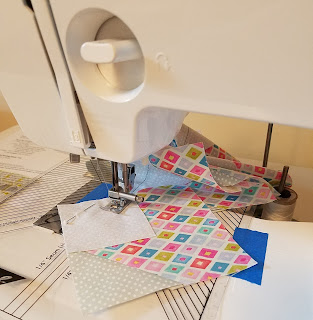 I took this photo as I was just getting rolling with the new quilt.  It seemed like I was speeding along at an unreal pace.  A few good days of work on this project, so focused I forgot to take photos, I had a whole top! 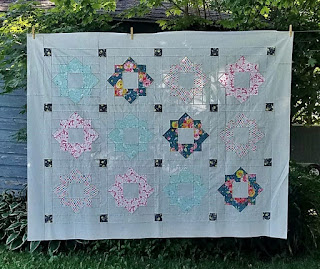 As I am typing this, I realize this photo, snapped just this morning, isn't so great.  I tried to edit it to be better, but apparently the lush trees and plants and grass are washing it all out.  But hey, it's proof the top is done!  (The binding is also ready, but no photo proof of that.  You can trust me.)
With this done so early, I fell down the rabbit hole of squirrels and started a non-stick project.  My blogging "friend" Preeti is hosting a quilt along and I decided I would participate.  When she announced it, I was interested, but on the fence.  A quick stick finish convinced me I could do this, too!  (And if the remaining sticks don't get finished...oh well!)
("Friend" in quotes because we've never met in person...not because I want to insult or lessen anyone!)
While contemplating, I hit upon the idea of using my brown stash as the background color.  I've used browns for the back of a few quilts over the years, but rarely use it much in quilt tops.  Combine that with my overflowing stash of turquoise/lighter blue and I'd have nice contrast and a less girly quilt to donate for the quilt along.  Win-win!
I pulled out my brown stash and started cutting.  Only three fabrics were used and only one was completely busted, but you can definitely see a dent!  Two were fabrics I remembered, the third was a happy bonus.  The remaining fabrics are stacked more tidily, so it looks even better than from just what was used up.
And then, in true Katie fashion (at least lately), I started sewing before I took any photos.  *sigh* 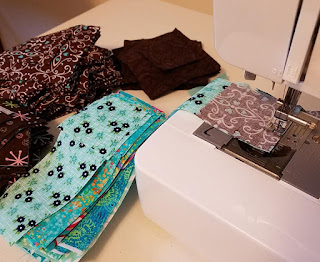 You can see the three different browns here, as well as a bit of the assortment of blues.  I cut no more than three from any blue fabric and did bust a few pieces from my stash.  That stash is also tidied up a bit from my last dive into it, so it fits into the designated area, but barely.  I know I choose blues and turquoises for a lot of quilts, but this is the third quilt I've made in a year using turquoises and lighter blues and it is STILL out of control.  But I guess chipping away at it a little at a time will eventually get me somewhere?
Once I had sewn the first set of seams for each block, I spent a chunk of time pressing them... 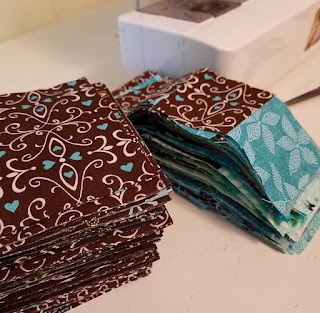 ...and I had intentions of getting back to it later in the day, but life happens.  My hubby is on vacation for the next two weeks, which means I am on call all the time for his whims.  Yesterday I got a delicious lunch out of the deal, as well as a visit with his sister and her family, so all was not lost.  (Today he is out fishing with a buddy, and those boys will fish for two days straight if allowed.  The friend's wife, though, will not allow that, so I know he'll probably be home for lunch...so I'd better make hay while the sun shines!)
Gabby is finally doing better this morning.  We had a false start with meds and had to regroup and go back to oral meds, which I wasn't convinced I could do.  Being confined to my sewing room (where she has been hiding anyways, but leaving the door closed allows her the whole room, not just cowering under the couch-chair), she is friendlier when I visit.  And I found these Churu treats (previously only seen on the interwebs) at my local pet store and she goes nuts for them, so instead of hiding and pouting after stuffing a pill down her throat, she comes right to me and scarfs up these little squeezy treats.  Here's to hoping we're on the road to recovery, not just symptom reduction.
And I promised a report on the strawberry milkshake cookies recipe from my last post.  While I was kinda "meh" about them, my coworkers loved them.  The cake mix that is a start gives them a very strong fake strawberry flavor, so much that many of my coworkers identified it as the base, which I think is where I was turned off.  It's not a bad flavor, just not entirely to my liking.  The dough/batter is also really sticky.  It crept up the shaft of my electric mixer beaters, so when I pulled them up a bit to fling the dough off into the bowl, it also flung some all over my kitchen.  Pink goo was found a few odd places in the subsequent days, but being so sticky, it stuck in a blob of goo that was easy to take care of.  In all, the recipe is a keeper, though unlikely it will be made just for the hubby and me.
Finally, Gabby has decided my cutting table (dresser) and mat are the best place to hang out in my sewing room... 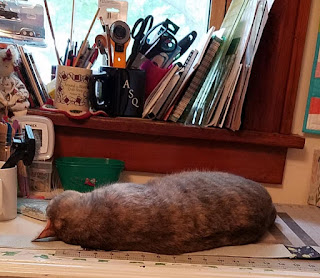 ...unlike Emma, she doesn't try to take over when I'm actively using it, but she crashes out regularly when I'm elsewhere in the room.  (Or when I'm not.)  I think with the warmer weather, it feels good - better than the poof bed she has enjoyed in the cooler months.  I would also hypothesize that being up higher gives her an advantage, but her position here - facing away from the room - makes me question that.
Time to get sewing!
Happy quilting!
Katie
Posted by Katie at 9:53 AM

Enjoyed reading about all you're doing, lately and in the weeks ahead. Those brown and turquoise fabrics are beautiful! Can't wait to see how they come together. Have fun! I saw that recipe on line, bought the strawberry cake mix, but haven't tried it yet. Thanks for the warning with the mixer! ---"Love"

Brown and blue are a nice combination - and you have some lovely fabrics. I especially like the brown one with the turquoise in it. I'm glad Gabby is doing better - she sure looks comfy on your cutting table - LOL. - ;))

When you bust a move girl . . . There’s no stopping you (unless for snacks I guess). That’s a really nice quilt top and design. Looks like it might work as a QAYG project. Those brown and blues are a great combination for Preeti’s QAL. Perhaps Miss Gabby realises you re nursing her back to health. Glad she’s on the mend. Had to chuckle about pink blobs of cookie dough flying about the place. *wink*

You are a friend - who says we must meet in person :-) And I LOVE LOVE LOVE what you have done with those browns and blues. Nothing brown or blue about that flimsy - if you know what I mean. Just gorgeous!!! Big Hugs.