sticks update and cats (of course)

I've been diligently working away on my "sticks" assignments.  Well...some of them...
First, we have the making a quilt from old shirts.  Last time I wrote, I had the shirts all deconstructed and ready to cut.  I cut.  And cut.  And cut.
And then I matched them all up in sets of 5.  I cut enough to make 64 blocks, plus a few extras because I rounded up how many of each shirt I would need to get there.  But when I got near the end of matching, I ran out!  No worries.  I still had a lot of fabric.  And maybe I counted wrong.
Turns out, I can't count to 5 very well and now have even more extra strips than I should.
Oh well.
All this while, I didn't take any photos.  Naughty Katie.  That stack of strips was pretty.  And that stack of mixed and matched strips was nice, too.  Nothing I can do for that now, so I'll just soldier on and show you the stack after my first round of sewing! 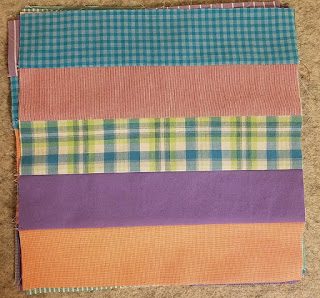 This batch went fairly quickly.  I sewed about four stretches to get them all done and some went faster than others.  I think it made a difference what I was listening to and how engaged I was.  But eventually all 64 strips sets were sewn together. 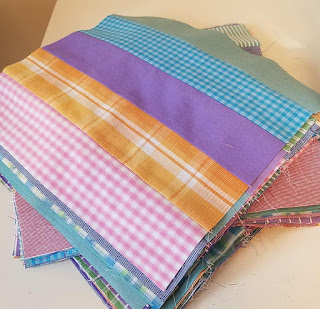 Next up was the daunting task to mix and match the blocks, as these need to be halved diagonally and sewn back together.  I can do the two-at-a-time method, but I still need to make sure I don't end up with bad pairings. 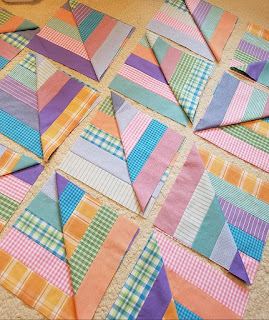 This is getting exciting!  I had loads of help, so this took longer than it could have, but in general, it went much more quickly than I anticipated.  And I allowed it to be not perfect, but good enough, because perfect would have taken weeks.  And is probably unattainable anyways.
Then I started sewing these together as leader-enders for the next stick project.  I'll share that project in a minute, but here are the first four final-design blocks: 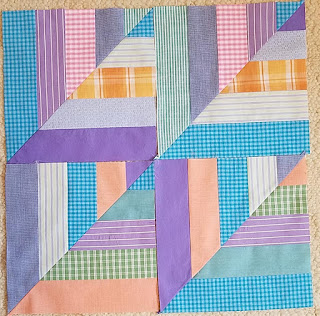 And I kept going for a while yesterday and had 14 before I stopped for the day. 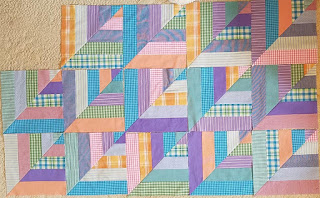 They seem brighter in these photos than they do in real life.  Usually I have the opposite problem, so I'm not going to complain, but for once I think they look better here than they do in person!
So the other stick I've been diligently working on is the bag of scraps from the closet.  You last saw all the pieces ironed and stacked neatly, but then came the real work.  What to do with them? 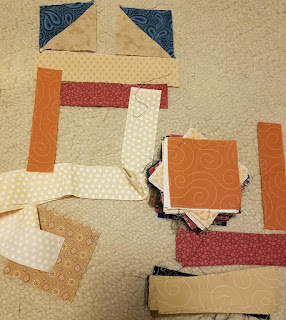 Saturday evening, after work and dinner, I sat on the floor and contemplated.  My original thought was a log cabin of some sort, but further look at the pieces led me to rethink that.  It seemed a lot would be wasted and while I just want this used up, I don't want to make excessive waste either.  So my friend Colette and I brainstormed, via text, and I came across this quilt that I had taken a screenshot of months ago while perusing Instagram.  Since there is no pattern info, I had to draft it myself, which is okay.  I had certain size pieces to work from anyways, so who knows if an actual pattern would have worked.  And I've been doing this long enough, drafting patterns isn't all that hard.  Usually. 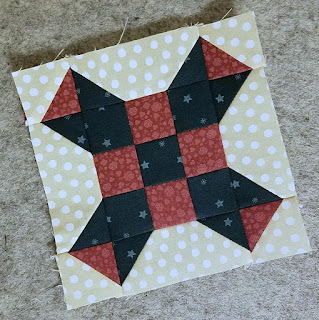 I cut into the pieces and made this little gem yet that evening.  It went together quite well and encouraged me to continue.  But I was tired and decided to call it a night.  I knew I was nearing the point of making errors due to tiredness.
Sunday morning, I was up and rolling, though, and made 5 more! 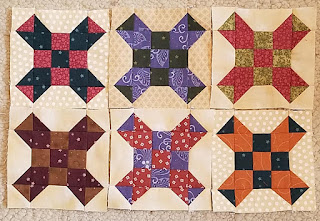 (Some of them look a bit washed out and I'm not sure why, but you get the idea.)
These take a lot longer than the shirts blocks, but that's okay.  I'm making progress and that's what counts.
I left all of these blocks on the floor last night and heard some zoomies happening late at night.  This is what I found this morning: 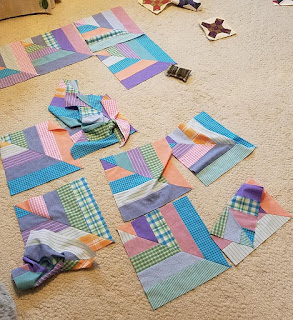 (Note the cat toy in the middle of it all?  They also knocked my rotary cutter to the floor and it slipped open.  I don't think anyone was hurt, but that scared me way more than wrinkled blocks.)
In addition to working on these, I did print out the pattern (after swearing at and installing my new printer - that is a whole saga, but whoever had the brilliant idea to send NO CORD to connect it to your computer and then require you to, via wi-fi, set it up using your smart phone (my phone STILL has not found the printer) should be fired.  I had the cord from the old printer (same brand), and plugged it into my computer right away, and lookie there: my computer saw the hardware, installed the hardware, and allowed me to print from the hardware...I still don't think my printer is wi-fi connected, but I don't care.  I want a printer for my desktop and am smart enough to figure out, if I need to, how to get something from my phone to my computer to get it printed, as I think most people are.  But I guess if you don't have a real computer...)
Where was I?  Oh, I printed the pattern for the embroidery, bought and washed some linen-ish fabric to stitch it on, and traced it.  I'm a little scared to start stitching, but will get there soon enough.  No photos, though.  Again.
While I was out shopping, actually looking for more background for the tiny stars, I picked up some valentine fabric. 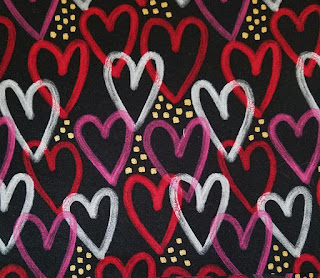 I wanted a mask for the next holiday.  Since I've found a pattern that goes fairly quickly, it's fun to keep up with the holidays.  I mean, I'd rather NOT have to wear a mask, but if I'm gonna do it, I might as well have fun with it.
And while I'm at it, this quarter yard will make four, so why not?  And since two coworkers have commented on one of my other non-holiday masks and I have plenty of that fabric, why not make a couple of those? 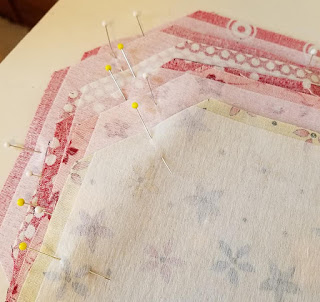 Well, I remembered to take a photo somewhere in the middle, right? 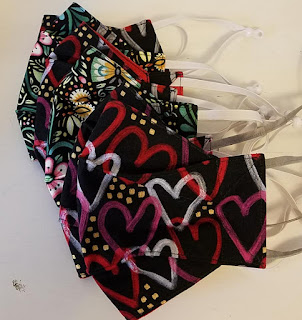 Six masks done!  It was nice that they all had a black background, so I could chain-sew through them, unlike the last batches where I had to switch thread color for every single one.
I packed them up into zipper bags and got lucky - while none of these three coworkers were there when I last worked, all three of their lockers were unlocked.  (Some lock them only when they're there, some don't even have a lock...)  So I snuck them in to surprise them.
But I have to say, Valentine fabric seems in shorter supply this year.  I'm guessing we can chalk that up to the pandemic, like so many other things, but I'm happy to have found this fun print.  And maybe fewer choices was a good thing?
Oh, and these did not leave home without some final inspection! 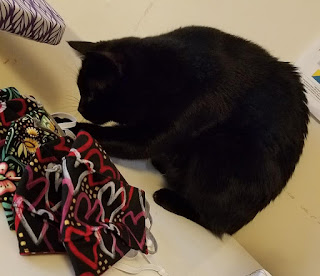 I think he was more interested in the elastic and ties, but he is often Mr. Aloof, so I will take and encourage any interaction he volunteers.
Speaking of cats and Valentine's day, today at the grocery store, I found kitty toys themed for the holiday.  And bought some flamigoes. 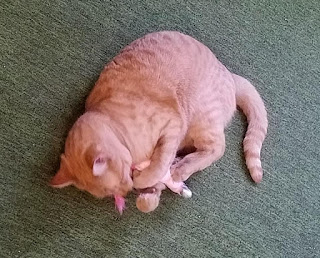 Finn sniffed the pink one and the white one and chose the pink one.  I told him I would bring him something, so he got first dibs.  He promptly started killing it.
Toby was waiting for his turn... 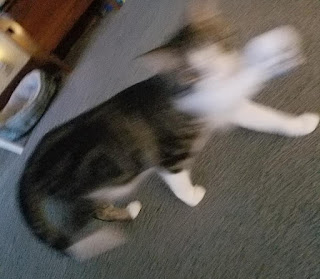 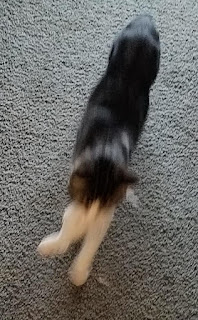 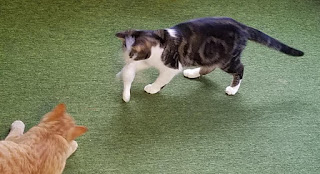 He snagged it and paced around the house, unsure where to kill it.  He finally slowed down enough for me to get a less-blurry photo when he got back to where he started (and Finn never left) and eventually sat down to take care of business.  It was kinda funny, but also kinda sad.  Poor kid didn't know what to do with his new toy!
This past week, the books I ordered shortly after Christmas arrived! 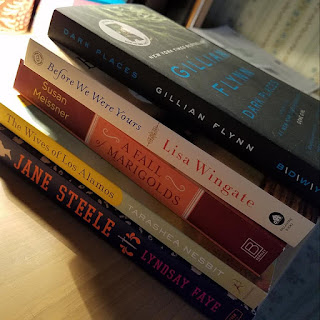 The hubby had been given a gift card to Barnes and Noble and since I'm not sure he actually knows how to read, he passed it along to me.  A few of these were on my list, but a couple, to finish up the gift card, were recommended elsewhere and sounded good.  One more is due in April, as it is a preorder.  A few on my list got postponed because they were only hardcover.  Those are harder to handle and cost more, so I can wait a bit.  But it was an exciting box to have arrive!
With that, I think I have caught you up!
(No, please don't mention the stick I didn't mention.  It has not gotten anywhere.  But I haven't forgotten either.)
Happy quilting!
Katie
Posted by Katie at 10:46 AM

Ugh!! Printers these days disgust me. We're about to fire this one, even though we've only had it a year. It is terrible about the connection, and like you said, it came without a cord to connect to the computer. We don't have an older cord to use, though. :P Your blocks for both projects are really cool. I love the array of shirts you're using, and the little criss cross 9-patches are very attractive. Are they 5 inches finished?

Katie you’ve been busy enough with projects! The shirt block are terrific, great colours and secondary patterns. I didn’t realise they would be cut on the diagonal and rejoined. Your scrap project is amazing - such a good block pattern. The heart fabric was a good find and it’s very sweet of you to make masks for your co-workers. We now have to wear them indoors. I have a great deal of respect and compassion for those who must wear them all day every day. I can last about 30 minutes. Funny kitties and their flamingoes.

Oh, Katie! I LOVE your posts - you had me laughing all the way through - and I forgot all about the stick you didn't mention - LOL - ;))