It has been a productive week!  I got tops made from the blocks I finished during retreat AND I removed a quilt from the Rack of Shame!
First up, I decided to tackle the Bringing Home the Christmas Tree quilt.  Fewer pieces, larger setting pieces...easier, right?  So I dug in and cut the pieces.  Then decided that my sewing room floor might be large enough to get at least an idea of where everything should go.  Guess what? 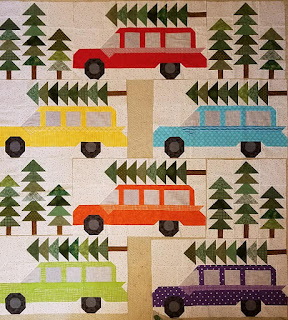 It fit!  Just barely, but I was able to get everything in there without overlapping or folding or anything.  Next I added in the sashing/background pieces and got sewing.  The seams weren't all terribly long, but it did get bulky before I was finished.  No in-progress photos, but I was done early enough in the day (whatever day that was?) and ran outside for a clothesline photo! 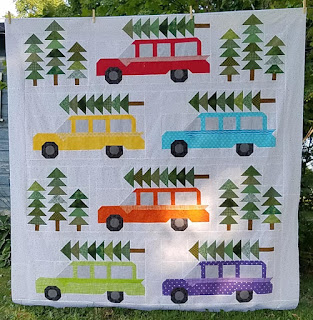 Freddie would like me to be sure to mention that he helped. 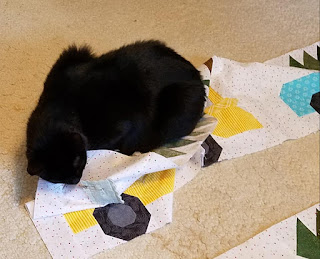 He inspected rows as I completed them.  Someone needed to make sure my stitches were even and my seam allowances proper.  He took one for the team here, before deciding I was doing well enough and wandered off to take a well-earned nap.
Toby also participated some in the sewing room shenanigans... 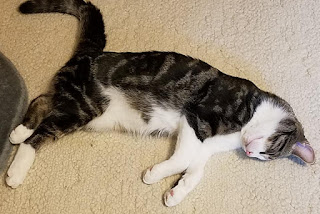 ...but he didn't stay there long.  Every noise is a new noise for him, still, so he is fairly alert most of the time.  He is settling in just fine, though.  He plays chasey-chasey with all the other cats and they have generally accepted him except at mealtimes, when he growls at anyone over food.  We're working on the food thing, but this is proving to be a bigger obstacle than being friendly.  There will ALWAYS be enough food, we just have to get him on the same page with us for that.
Anyways, not to be deterred, I decided the Nova Star blocks needed to be sewn together as well.  Riding on the high of finishing another quilt top, I kept the momentum and again decided my sewing room floor might be large enough for this next set of blocks... 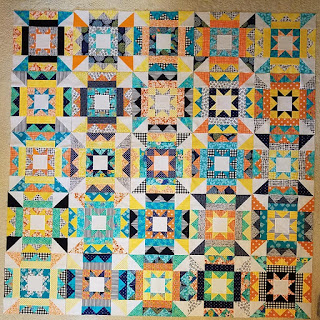 ...it IS!
(Full disclosure: I might have been too lazy to vacuum the floor downstairs, and knowing my sewing room floor is less likely a cat wrestling ring, I knew it was less furry, so I decided to do this in that room.  Also, the hubby has been binge watching Game of Thrones downstairs, so he was kinda in the way...)
Before I used up all my floor space, I auditioned sashing fabrics from my stash.  I didn't have enough of the white I used as "background" for more than about two sashings, so I needed something different.  I tried a variety of shades of grey, settling on a fairly light one that I had plenty of and started cutting.
I also searched out the turquoise that was my guide for pulling colors, hoping I had enough of that for cornerstones.  I knew it wasn't a big chunk, but thought it appropriate.  And I had enough!
Of course, I only cut enough sashing pieces for one direction (math...ugh...), but since I had about two yards of the grey fabric, all was well and I got a break before having to sew the long seams!
I pushed myself, but had it done before (late) dinnertime! 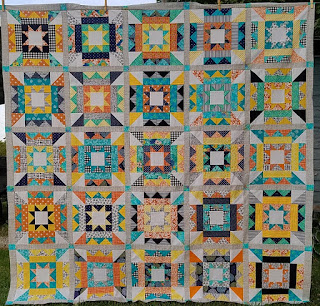 Once again, I ran outside in dwindling daylight for a photo shoot.  Thankfully, we had calm weather days and it was quick and easy!
I have no idea how I will quilt either of these, but they are out of project boxes and have been added to the sagging Rack of Shame.
After a few grueling shifts at work (okay, only one was that bad, but it wasn't THAT bad...just busy and trying to tackle a lot of things at once), I have a few days off and decided that I needed to longarm something.  Since Colette had recently finished her bear paw quilt, and we challenged each other to make this quilt, we set a goal of finished by October.  We both had a running start, but petered out midway through.  She longarmed hers during retreat last weekend, so I needed to get going, right?
A quick search through some larger pieces in my stash yielded a piece JUST big enough for this quilt and I was ready to roll.
After a LONG stretch of procrastinating about HOW to quilt it.  I wanted to do something more custom, but not go crazy.  Swirls are my go-to, but I'm trying to branch out.  And I finally found a video on YouTube that had a motif I felt I could tackle that I also liked!  Once I get that far, it gets a lot easier to load and get started quilting.
Well, easier to motivate myself.  The actual effort... 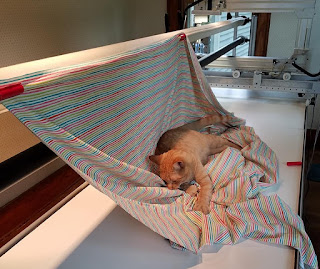 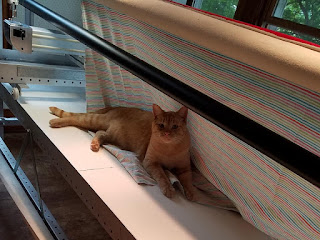 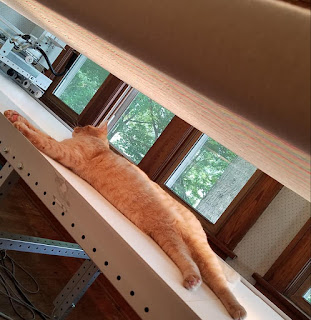 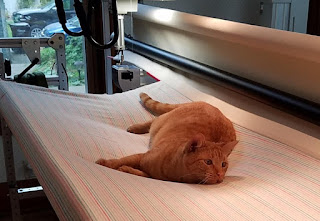 Obviously, I had "help."
Being a big oaf of a cat, he made a big dent in that backing when he flopped on it, but I misted it with water and rolled it back around the takeup roller and let it sit a bit while I wound bobbins and such and it shrunk back up okay.  But what a little stinker!  (He is so cute and sweet, though, you just pick him up and give him kisses and tell him you love him!)
Anyways, I finally got the quilt loaded and Finn found something else to play with.  Or took a nap. 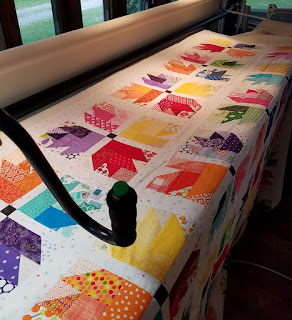 I decided to do straight-ish, parallel lines in the larger sashings, which meant I would have to remove and rotate the quilt (a first for me, believe it or not!), but that was okay.  It stabilized the quilt nicely while I quilted each block.
And then I got to the fourth block. 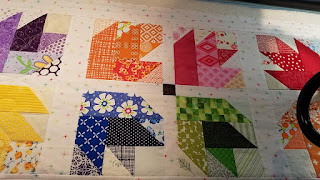 Well.
No way am I going to be able to fix that now.  So I just told myself "I'll remember how to do that motif without the points to guide me."
I was wrong.
This block is all sorts of a disaster.
But I left it.
Moving on.
(But not without making sure there were no others that COULD be fixed without ripping out everything I had already done!)
It will be fine.  No one is going to notice, right?  And if they do, they'd better keep their mouths shut because I just might throw a shoe at them!
So the quilting went quickly.  Rotating the quilt was a bit of a task, particularly considering my backing wasn't as over-large as it could have been, but I got it done without having to sew on any leaders or make any special compensations.  Yay!
All along, I had planned to use up leftover binding, so that "measurement" started this morning. 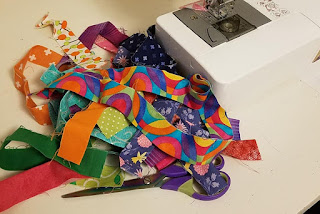 I get out a calculator, pull out a binding scrap, measure it, add that number to the running total on the calculator, and stop adding to the pile when I'm a bit over my calculated need.  You wouldn't notice I even removed about 300 inches of  binding from the pile, but it IS gone.
I then sewed these together, being mindful to keep them random as much as I could.  And then sewed them to the quilt top! 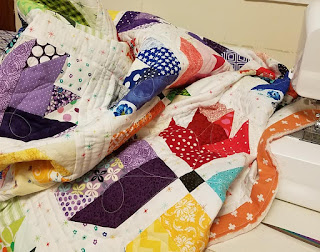 And now I have the task of hand-sewing.  But the timing is good, as our fall weather seems to be setting in for real.
And with that, I'm off to lunch with my parents - who just pulled down my driveway!
Happy quilting!
Katie
Posted by Katie at 11:11 AM

You certainly had a VERY productive week! - LOVE your quilts! - and your help! -;))

You really have gotten a lot done this week! All of them are really nice; I love the Christmas trees and trucks! I'm just wondering if you've ever considered how much more you might have accomplished had you not had all the help from your kitties! :)---"Love"

Nova Stars are every bit as fabulous as I imagined them to be. What a spectacular quilt for a scrap one! The Christmas’s Tree Cars are just too cute and so important to have furry assistance. Maybe that’s why I don’t get as much done? Your Bear Paw quilt looks terrific in those colours and fabrics and having it quilted ready for binding ( love a scrappy binding) is a win.

Great quilt finish. Keep going with the machine quilting. No one will see any changes (creative stitching) from across the room.