While some of these quilts have not had their own blog post (they all will eventually), the call for donations is drawing near.  Which also means the call to report what we've made has been announced.

I contacted the organization I plan to donate to this year just yesterday.  And while the gal in charge of Hands 2 Help has identified and vetted a few charities, I have a local one I decided I would quilt for over the past year.  Guardian Angels Suitcases 4 Kids is a group here in my town that collects donated items, everything from clothing to mattresses, that are given exclusively to foster children and their families.  It started out with the knowledge that children are taken from homes often with just the clothes on their backs.  The gal who started this wants to see each child have something to call their own as they are removed from whatever their situation is.  And it has grown from there.

She came to our quilt guild a few years ago and talked passionately about what she has created and the group has donated some quilts since then.  I decided to set a goal for myself of one per month since the donation date in May last year for my donation this year.  For those of you following along, you've seen my progress and may have guessed I made it.  And then some. 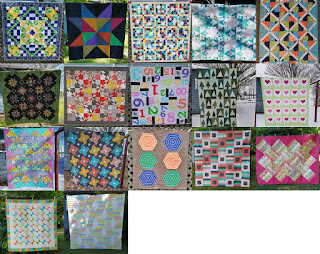 They range in size from small baby quilt to probably close to 70" square.  Those that have been blogged should have the tag "h2h2020" at the bottom of the post (as this one will), so you can click on that to bring up all the posts.

When I contacted the gal in charge yesterday, I knew they were in the process of moving to a new, permanent, donated home.  (The charity, not their family!)  And with the virus panic still very present in the minds of many, I wasn't sure when she might be able to take them.  She assured me that in a week or so, when the move is finished, the quilts are welcome!  I'm so glad, but was also willing to hold onto these for a bit until the time was right.

But when I counted, I realized I had about four more than I thought!  I'm pretty excited to see these go to new homes, even if I will probably never know who got them.  (And a couple I'm sad to see go - I love them a lot - but I know I can't keep them all, so instead I can brighten the day of a child that needs it far more than me.)

What else have I been up to?

Well, a squirrel visited.  And my friend Colette and I decided we needed to chase the squirrel together.  It started out small... 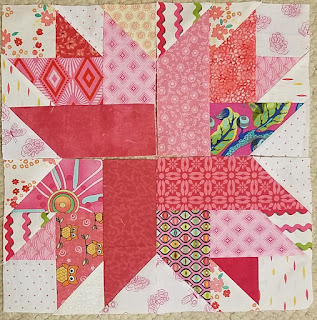 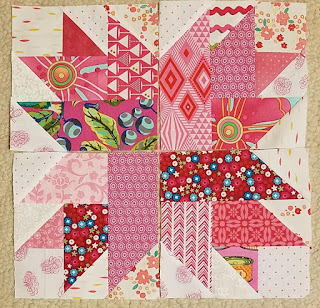 And then there were 15!  (I mathed and decided I wanted 100 blocks.  These will assemble into a Bear's Paw configuration of 25 blocks.  And if I make 15 of each color, I will have a few extras, but it will be okay because I can scatter them a little better maybe...or just have a few extras for something else.) 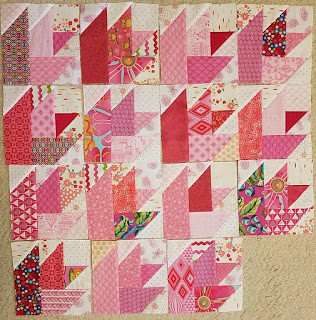 And then purple happened! 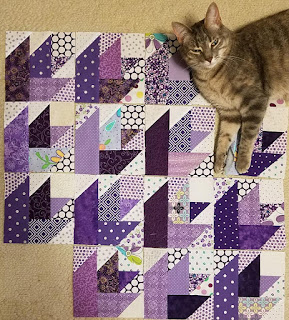 Gabby helped.  She then took a nap.  Right there.
(But last night, as she was demanding pets and snuggles and I was trying to read, it hit me that pretty much no one has actually seen her.  Like, as in visitors to my house.  She hides from everyone but the hubby and I (and even us sometimes), but has such a big presence on my blog and Instagram.  It's sad she has such a big personality, but hides it from almost everyone.) 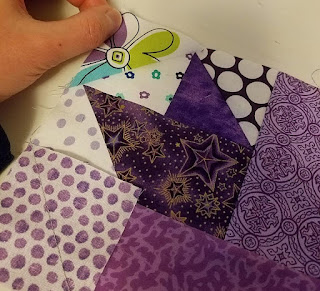 But apparently last night, I wasn't paying enough attention and sewed the lost corner to the wrong corner.  And trimmed it before I realized what I had done.  Oh well.

I also put the macaroon quilt on the longarm and got it quilted last week. 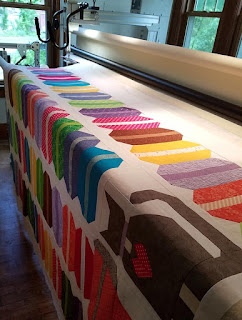 I did a simple ribbon meander, but haven't taken a photo yet.  The binding awaits me hand-sewing it down, but I have had a few other things happening (chasing squirrels, work...) lately.  I will get to it soon and send it on its way as soon as I can.  I thought her birthday was the middle of June, so that was my target.  Turns out her birthday was the middle of May.  Oh well.

And now it's time to go run a few errands and then get the afternoon chores done.  (They could be morning chores, but the hubby claims he is allergic to the vacuum and no matter how hard I try, he always needs the bathroom 15 seconds after I put the toilet cleaner in the bowl...just easier to do it after he leaves for his second shift job!)

And THEN maybe I can work on the blue/turquoise parts for my squirrel?  After I bake some cookies to take to work, of course!

Happy quilting!
Katie
Posted by Katie at 11:26 AM

How wonderful for you to donate all those quilts to a place who helps others in need! No doubt they will be much loved and appreciated. I like your little 'tulip' blocks that turn into bear claws. :) I had never noticed that's how that block goes together; never looked closely at it before I guess. Wish I could get in the mood to quilt just half or even a quarter as fast as you do! Have fun. ---"Love"

All your quilts are wonderful. They will be loved and enjoyed by each recipient. That is a wonderful donation. The little flower blocks set as bear paws are so cute, I love the pinks and purples, the wow, turquoise comes next. This will be a beautiful set to play with. The macaroon quilt is going to be so cute and a great gift even if it is later than you planned. Gabby is a cute little helper, couldn't do it without her!

Your donation quilts will surely put a smile on some faces - they are so pretty! You made me laugh at - you "mathed" - "And then purple happened." Your pink/purple blocks look good in either configuration - it's amazing how they can look so different depending on how you twist them. And the "oopsie" falls into the category I like to call - "One of these is NOT like the others - LOL". Leave it there - see if anyone notices - ;))

Seventeen! Katie, you are such a blessing! Thanks for being part of Hands2Help 2020!

Forgive me for not quilting on each post but I have spent the late afternoon enjoying all your quilting and kitty-kat updates. Such delightful quilts emerge from your sewing room Katie and to donate seventeen to the charity is such a wonderful gesture. The idea of putting together a package for those foster children is such a decent thing. It must be so unsettling to be taken from familiar surroundings even if it for safety.