I think our "new normal" has started to include some manipulation of the space-time continuum.  I go to work and it flies by.  We are busy.  So busy.  This is good.  Also, hard.  I leave and feel like I have been gone from home for days.  The clock and calendar say otherwise.  And then, tired as I am, I struggle to sleep.

So, for a quick minute, before I share my quilty adventures, I'm gonna stand on my little soapbox for the two of you who read this and ask a favor: Please do not tell your cashier, if and when you choose to go out, your opinion about the current situation.  We've already heard it all.  And it's stressful to hear so much.  I've filtered social media.  Stopped watching actual live television.  I cannot tune you out, so please?  Talk about the weather.  Heck, complain about the weather!  Tell me you're going to be a grandma again.  Complain about how much your new tires cost.  NOT. THE. VIRUS.

Okay, done now.  Thanks!  I promise to be good now.

In my last post, I was plugging away at the kit I purchased in January.  Today I finished the last of the 20 blocks!  I've been doing two every day I get a chance to sew, but today I dug in and did four! 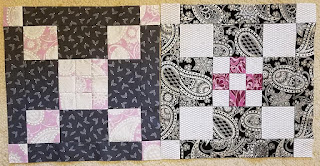 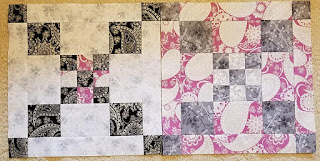 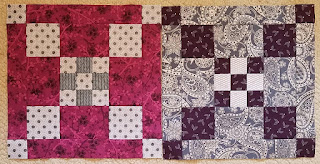 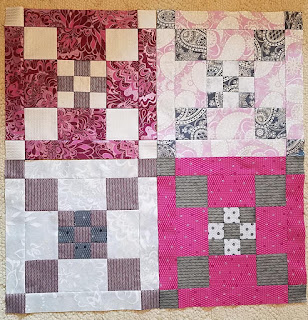 The colors are in varying shades of not-right, but I've been sewing all hours of the day and the weather is sometimes sunny and sometimes pouring rain.  No snow in the last week, but where I live, anything is possible!

Next up will be sashing and borders and whatnot.  The dreaded long seams are not far off.

I'm also plugging away on the little half square triangle bonus blocks, but failed to photograph them.  Just imagine a bunch of green and now a few purples added in!

Also, since the baby quilt deadline is looming, I decided to suck it up and put it on the longarm last week.  (I don't remember what day - they're all blending together as either "worked" or "didn't work" any more!  See - space-time continuum is going wacky!)  I only took one photo, though, before I was done.  I was just plugging away and generally having a fairly good time, not stressing too much. 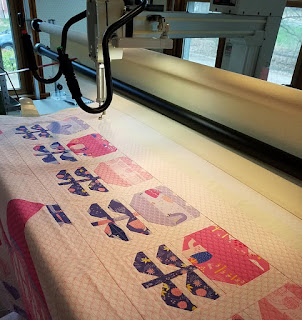 I did a lot of cool stuff, so I promise if it ever stops raining and being windy and stuff, I will get good photos.  I did clouds in the sky and clamshells in the roofs and bricks and pebbles in the castle walls and all sorts of fun stuff!  The binding has been sewn down and I expect I will get to the hand-sewing portion of that tonight.

While I was working on this, I was taking breaks every so often, and saw a quilt made of macaroon cookies in my Instagram feed.  It was cute, but I went back to the longarm.  And then I remembered my high school friend, Becky (who I am fairly sure doesn't even know I have a blog), and how she has shared some of her adventures learning to bake macaroons not so long ago.  And she doesn't have a quilt from me.  So maybe I should make her a macaroon quilt?  And then, like bolts of lighting, I remembered she has a pink stand mixer and Lori Holt has designed a stand mixer pattern.  Could the macaroon quilt use a stand mixer?  And wait, while thinking about Lori Holt, she has a kitty pattern.  Becky has two kitties.  Could there be kitties in the quilt, too?  Why not?  They help!

And so, after finishing longarming, I drafted up a pattern of how to put this all together.  Currently it will have 47 macaroons, but if it looks too narrow, it might get more.  I'd share my design, but it's a hot mess... 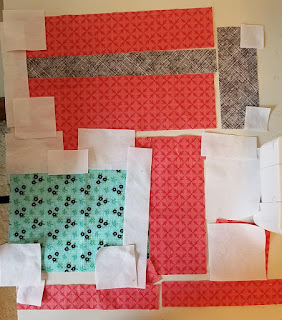 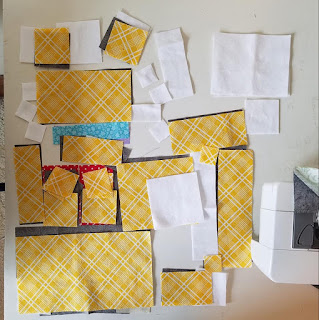 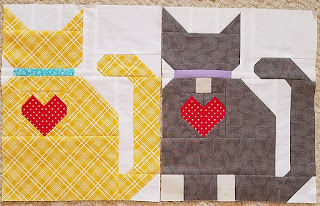 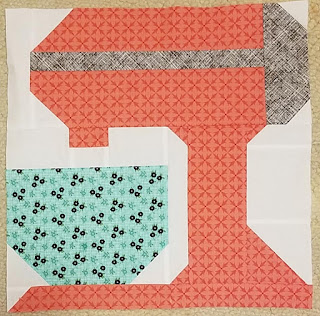 The cats are actually only a few inches shorter than the mixer, but you get the idea.  She has an orange tabby and a grey tuxedo tabby.  I stalked her facebook photos to get the collar colors right even.  Because she is the kind of girl that this will not be lost on her.

They're not quite done, but getting there. 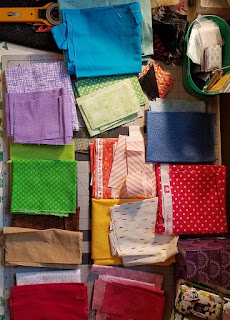 Some may be exchanged or removed.  The background is white-white, so some of these might not contrast enough.  But it's a start.  I debated ordering a bundle of solids (either online, or asking my local quilt shop owner to create one for me), but decided to try to use what I have.

I also tidied up my cutting mat area, but you can hardly tell.  It's still a bit of a disaster, but I'm getting there.

In other news, one of the recent storms left a stick in my yard... 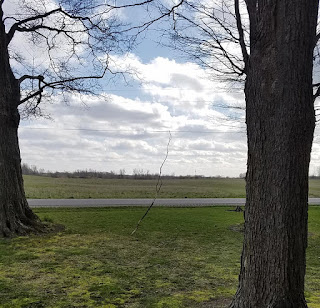 (it looks like the power lines are holding it up, but I assure you, those are across the street)

This made me laugh way more than it should have.  It fell down later.

Gabby has been helping.  The quilt I shared a tiny peek of that was on the longarm last week, I sat down and bound.  Gabby, of course, helped.  She does not like to snuggle.  Unless you are binding a quilt.  She doesn't give one whit about the thread.  She just wants to be in the middle of things.  So I let her.  Because anything that encourages a housecat behavior over her feral beginnings is good for me. 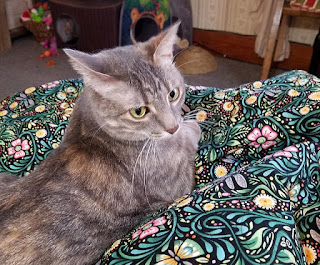 She looks a bit perturbed, but I think she was interested in what was going on outside the window next to us and I kept trying to distract her.  All those birds and squirrels and leaves moving around!

And finally, Finn.  I found this cardboard cat scratcher "cottage" at the grocery store the other day.  And no, it's not an essential purchase, but I was down that aisle for essential cat food, so, well, if it fell in my cart, who is going to stop me? 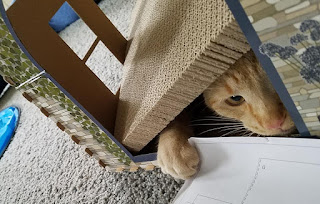 I thought the box said it was "infused" with catnip.  That could make sense for those thick scratch pads that go in the bottom.  No.  It said "includes" catnip.  So, about 10 minutes into punching out about 40,000 not-hanging chads so I could push other pieces of cardboard through them, I realized there was a very flimsy, hard-ish plastic bag of very finely ground catnip.  In his mouth.  I now have a hole in my finger, but the catnip is safely stored out of his reach.  Well, okay, he's a cat, so nothing is beyond reach.  But he hasn't sniffed it out yet, either.

He likes the cottage less now that it is fully constructed.

This same day he also pulled the dish towel down from the stove and wrestled it on the floor, in a ball, as though it was filled with catnip and must be killed.  This was before the cottage incident.  I have a video, but uploading it is sketchy.  Maybe another day when I'm feeling more adventurous?

Freddie, as always, is being a stubborn teenager.  He wants little to do with me unless it has to do with my sewing chair.  Then he gets mad that I want to share it because I'm sewing.  Ah, cats.  I love them.

Tomorrow I think I'll longarm again.  Weather permitting - I don't like to run it when there is danger of power outages.  Far too expensive of a piece of equipment to sacrifice to a power surge!

OK - as one of the two who read your blog - BOB promises not to tell my cashier my opinion of the current situation - he/she has his/her own - and doesn't care about mine. I really like ALL of your blocks - and your fur babies - keep the photos coming - ;))

Your ideas for the quilt for your friend are great! I can't wait to see that one finished! She will love it I'm sure. My son, (who works at Academy) has had to deal with some real doozies (Is that how that's spelled??) where he has worked curbside for a couple of weeks. Hopefully they will all get inside next week, but he just enjoys life no matter where he is, so he has been enjoying the sunshine without being too hot! Have fun with that quilt (and your cats)! ---"Love"

I ended up unplugging Mo'e about halfway through the second row because it was getting really dark outside. Those fabric cats are cute!

The quilt blocks are great, I like the colors and fabric combinations. The quilting on the princess castle sounds so cute. Can't wait to see it. The macaroon quilt sounds cute. It's great when you can personalize a quilt. She will love all the special details! Enjoy the kitties, they are adorable! Hope the weather gets nicer soon, too.

I love your cat & mixer blocks! Her quilts are so cute and I love them, but don't really want to make one. You are such a good Mama to your cats! The little house is too cute, but you can't predict how cats are going to react to things (sometimes you can tho).

After offering a big smiley hello, I only ask if the cashier is going okay and are customers being kind. I can’t imagine how stressful it must be for them. They tell me about the customers who shout at them, complain about having to pack their own bags, being limited on some items and a lot of other inconsequential things. I listen and after packing my trolley thank them. I know it’s meant to be the other way around but I’m very grateful to them for continuing to work and be exposed so that we can eat. So thank you Katie and your colleagues and all those on what we now call the Front Line.

Your cats are so funny. I’m still chuckling at their antics and typing errors as a result. Love the plan for Becky’s quilt and it’s looking good so far.

I hardly get out to the grocery store or anywhere, for that matter, so don't often talk to store clerks but I absolutely will refrain from talking about the virus and the situation we're all in when I have a conversation with a clerk or anyone else who works in a public environment. If you're a grocery store clerk (or any store clerk), thank you!
I love your mixer (especially the colors of the mixer and the bowl!) and the cats. I'm sure your friend will be thrilled with the quilt.