I feel like a big slacker not sewing much lately, but my brain just can't wrap itself around the ever-changing situation we all face, so I've been watching more television (NOT the news) and playing games on my phone.  I need to stop that.  It is only making me more frustrated!

So yesterday, I finally dragged myself into the sewing room.  The princess castle baby quilt only needed outer borders, which should not be that hard, but I hate the long seams, so that was not helping motivate me to get up there.  But I did it! 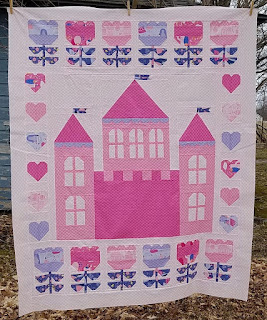 I also pieced a heart that will become a pocket that goes over the large, brighter pink lower middle portion of the castle.  I assume that is to house these... 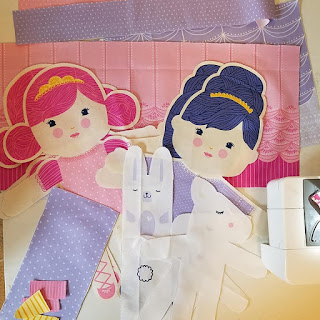 The heart didn't get a photo (yet?), but I was excited to get to these.  I've never done these pre-printed dolly type stuffed toys, but this panel came with the kit (a selling point for the kit!) and I thought it would be fun to try.

After cutting what seemed like 1,000 pieces, carefully making sure to preserve the instructions that were printed amid the pieces, I finally got to start sewing.

Remind me again that I thought this would be fun?! 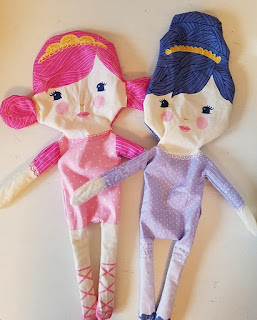 Actually, the sewing wasn't too bad.  Rounding the corners for toes and hands was a little tricky, but these will be stuffed, so they'll be forgiving, right?  Both dollies lost their thumbs (a little bump that seemed to be more difficult than their final worth) and the purple one lost her bump-ears as well.  I was struggling a little, but THEN I had to turn them right-side-out.  I've had a little practice in my youth helping my mom turn things, so this went fairly well once I decided what pointy thing in my arsenal of quilting things would work best.

But THEN I had to stuff them.  Poly-fil is very slippery.  It comes with a chop-stick looking stuffing stuffer, but that just pushed right through the stuffing.  My purple "thang" did a little better, particularly moving the stuffing around evenly, but I also found the legs and arms to be about as big around as my finger, which also proved a very good tool.

But it took For. Ever. to stuff them.  Never mind the pauses to sew across the arms and legs "so they will bend"...per instructions.  I'm pretty sure the arms would have bent without it, but now they're good and floppy.

Never fear.  The never-ending bag of stuffing has not shown any sign of decrease even after stuffing these to a fairly firm level.  (If only toilet paper was so resilient!)

Then I had to sew the holes shut that I had left for turning.  *eyeroll* 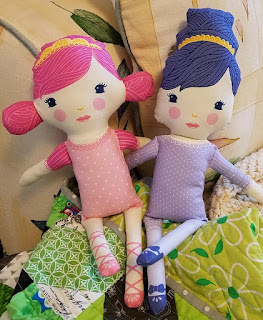 There are many other parts in that stack, including skirts that have 15 steps, none of which seem to make a lot of sense (like the one step that says to sew to the "waistband" but there is nothing marked), and a unicorn and a bunny.

Remind me again that I said this would be fun and I was excited to make them, okay?

But, it is a lesson learned.  I don't think I will be volunteering to make anything else like this any time soon.  Even if the hubby did say "those are cute, you should make more for the nieces"...ugh!  Nope!  Not only do I not have any additional panels, these were enough of a challenge.  And I'm not done!

No photos of the kitties again today.  I worked today - my workplace has been deemed essential and I'm honestly more afraid of people who are being jerks that any germs - so there will be some kitty snuggles coming soon to wind down from that.  (Work wasn't all that bad.  We weren't as busy as we thought we might be, but we were open and will continue to be and that made a lot of folks happy.  And I didn't have one angry, entitled or otherwise angry customer all day.)  Perhaps some photos then, but in the meantime, I'm sure there are plenty of other internet kitties if you need them!

The dollies are cute!! And I will remind you again that you said this would be fun and you were excited to make them - and I will also add - now that you have made them - you never have to do it again - LOL - ;))

I promise you AND me that I will never try to make those little dollies! They are cute as can be, but my hands couldn't make them, even if I wanted to. Have fun with all your endeavors! ---"Love"

I have made some cloth dolls, but they weren't so tiny. Even though they were bigger, it wasn't very enjoyable, but not too bad. A tiny doll like those would not be done by me. However, you accomplished it and you can be very proud! The quilt is adorable and with the dolls, it will make a little girl very happy! Hang in there at work. I have not been anywhere since Friday when I went grocery shopping. The only times I have left the house have been to do some yard work - pulling weeds and mowing the grass. Or taking the garbage out. Woo Hoo!! DH went to Walgreens to get some prescriptions and said there weren't very many people there. Our son (who we went to Hawaii with) went grocery shopping in town (in Kansas) and there was no meat at all. So we went to the army base where he had been working (he's done now and his retirement begins the end of this month). At the army base, the only meat available was a 10 pound spiral ham, so he bought that. I might not need to shop for a few days.

Your comments about the dollies reminds me of the rabbits I started making from a panel, complete with skirt for the girl and shorts for the boy. They looks like they might be from the same designer. They are a pain to cut, sew and stuff. But they turn out so darn cute! Well done!

I love the little castle quilt and the dolls are adorable! I haven't been out except to get a few groceries. People seem to have settled down and stopped the crazy buying except for toilet paper. Glad your customers were not a lot of trouble. I have a bunch of sewing projects to keep me busy and I like being home anyway. Being retired, we are doing well and keeping busy at home. I do feel bad for younger people being off work and worrying about a paycheck. Hopefully this will pass soon. So keep busy, sew a lot and stay healthy!

Their imperfections are what makes them absolutely adorable. No, you don't have to make more. Been there, done that and moving along sounds just fine.
Do take care of yourself. Paul is playing a house-husband and getting good at it. Construction is deemed essential in the MD-DC-VA area and so I am working. I can telework if I choose but social distancing from snacking has been a challenge. Going to work ensures that snacking is limited :-)