I'm sick again - I believe this one is another gift from my boss at work - but have decided to try to get as much done as I can today (with naps) because tomorrow may be worse.  So blogging...here I come!

I've been absent for a little longer than I wanted to be, but there just wasn't much to show yet.  But I got busy and have stuff to show now!

First up, the princess castle baby quilt.  I opened the kit... 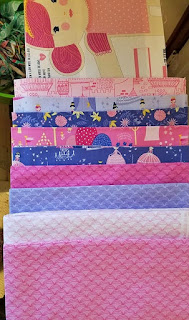 So sweet!  And that top one will make two little dolls that fit into a pocket that gets sewn onto the quilt after it is done.  That will be new for me, but I'm going to give it my best shot!

This is my favorite fabric, hands down: 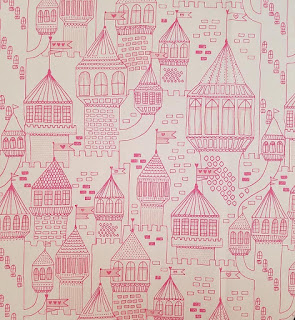 After I figured out what was and was not needed (I'm making the quilt smaller, but the cutting (and assembly) instructions are not helpful in that respect) - a task that seemed almost impossible and was stopping me in my tracks every time I thought about this project - I was finally ready to start cutting.  It only took two days! 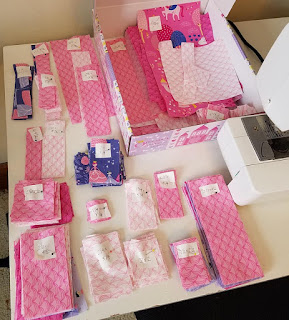 There are more than pictured here (this was midway through cutting), but you get the idea.  LOTS!

The first blocks required a lot of lost corners, so out came the Angler again and off I went. 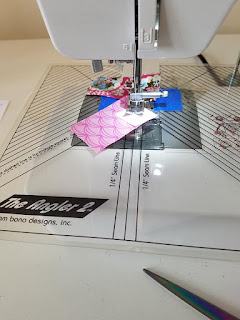 108 pieces and a good chunk of time later, I had this: 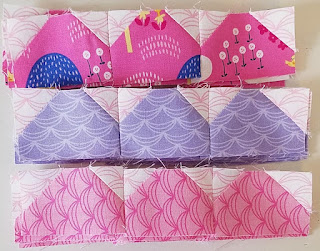 The whole tulip row has something like 298 pieces or something.  (I've lost that tally, but it's probably for the best.)

That's a LOT of pieces!

And those two rows took about as long as the remaining parts: 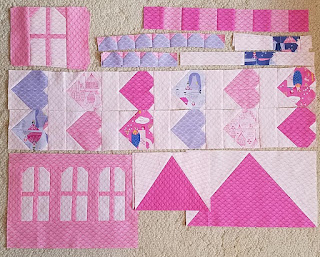 Next up was assembling all these parts and rows into a top.  I didn't finish, but before I had to tidy up for Project Quilting, I was about this far along: 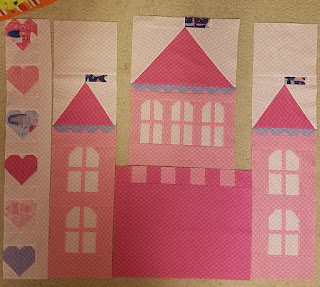 Obviously, some of the parts is previous photos have been set aside, but this is coming together nicely.  And that pocket I mentioned?  It goes in the big, blank pink square in the middle of the castle.  It will have a heart on it so it doesn't look so plain.

And then there is Project Quilting!  The prompt this week is "Give it Away" which is kinda nice, even if that's what is going to happen to the previous four as well.  But it basically lets us do anything at all.  So of course, I decided to make some sort of ginormous quilt. 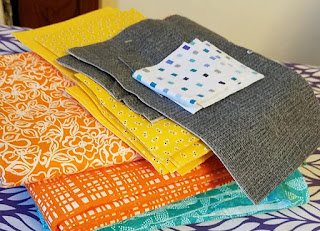 I pulled some fabrics (and cut a bit before I remembered to take a photo...oops!) and made a test block.  That worked nicely, so it was on to mass-cutting and mass-sewing.

Again with the Angler! 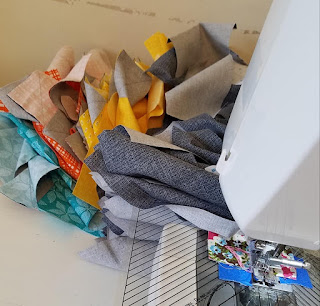 Each step seemed to take forever, but there are a LOT of pieces back there, losing their corners.

I could show more, as I have the blocks almost to the just-two-halves stage, but I think I'll save that for a big reveal later this week.  Assuming this bug that started yesterday afternoon as a scratchy throat and has progressed to a mild fever and less scratchy throat after a 4-hour-nap today doesn't get worse.  (That's the hardest part of these short challenges - if you get sick, you're doomed!  But I'm trying to keep a positive attitude and take some super vitamins that are supposed to help speed the process along.  It can't hurt, right?!)

And we can't have a post without cats, right?

The hubby was having a rotten night the other night at work, so I sent him this one: 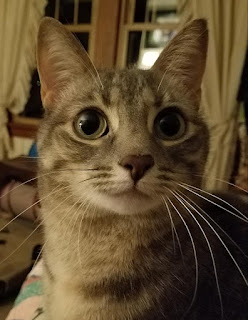 She also helps me.  She was very intrigued with something I was doing with the machine here.  I don't remember what, but it wasn't winding a bobbin, like I thought I remembered! 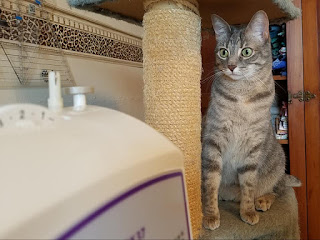 And then there's Finn the smiling cat, sleeping like he has not a care in the world.  (He shouldn't have any.) 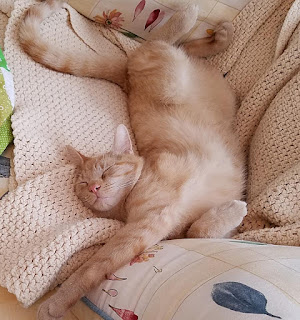 And lastly, Freddie, who doesn't photograph well, was crashed OUT on the floor after being allowed to play outside (in his enclosure for safety) the other day.  He is SO ready for spring and playing outside, even if his stamina isn't quite up to par from all the wintertime sleeping! I suppose now it is time to go figure out dinner. The hubby is over there eating caramel corn, so I suppose he might be hungry...

Your Princess Castle baby quilt is adorable!! And I love that pink castle fabric, too - and I'm NOT a pink person, either! I'm looking forward to seeing more of that ginormous quilt - love the color combination. Finn and Freddie sure look comfy - especially Finn - and Gabby was VERY intrigued with whatever you were doing - LOL - ;))

I hope you are feeling better soon! Work is a great place to pick up germs, sorry they caught up with you. The princess castle quilt is going to be adorable, I love all the pink fabrics. I hope you get your challenge quilt finished even with being sick. It looks interesting! As always, the kitties are adorable!

That quilt is going to be adorable. Well done. I hope you feel better soon.

Sorry this is so late; hope you are feeling much better by now. Your little pink castle is just so very cute, and will be much loved I'm sure! Those tulip rows are beautiful! Those cats of yours are so funny. I like the one all stretched out and his tail straight up! Hilarious! Keep feeling better, okay? ---"Love"