While I was waiting for the next Project Quilting prompt, I decided to go ahead and get started on my February charity quilt.  A design had been demanding attention recently - original pattern found here - and I decided it would be a great way to use up my stash of 2.5" squares.  Squares that I'd been stashing with no plans for quite some time. With a pattern I never saw myself making.

First, I drew it out to see if I'd like it scrappy: 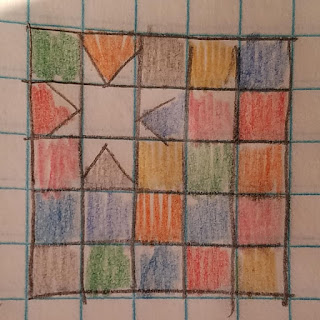 Then I set about cutting the white squares needed.  Gabby helped. 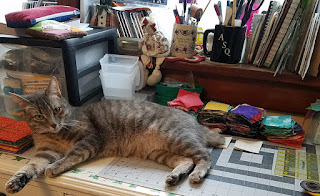 I forcibly moved her (you can see by the look on her face, she is unhappy with me already!) and got a first block layout... 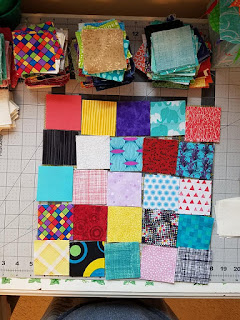 I used my 12.5" square ruler to move these from cutting table to sewing table.  It worked quite nicely! 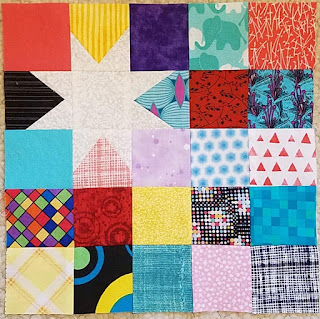 I like this!  I have a lot of turquoise pieces in this stash, but as long as I pay attention, they should be okay.  I pulled the very lightest ones out, but wanted to use as much as I could.  The white stars were made from smallish pieces from the actual stash (there weren't enough light squares to do all the stars), so I feel like I accomplished something there as well!

So now that I knew this would work, onward! 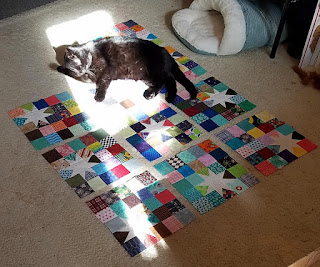 At the end of day one, I had nine blocks.  Freddie is posing here at the start of day two, as you can see a 10th block in there.  We had such wonderful sunshine, but it did make photography difficult.

Day two I accomplished another 9 blocks! 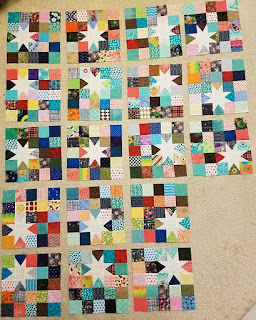 This was later at night, so the colors here are also not true, but closer than the washed out and super dark when the sun is shining in on them. 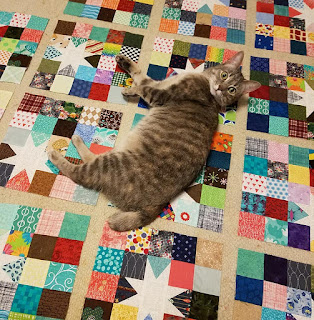 Gabby stopped for a moment to pose for you all.  Soon after, she and brother Finn (who does not often hold still long enough to get a photograph) were having an epic wrestling match on the blocks.  To make sure they had enough fur.

At this point, 18 of 25 blocks in, I was still going strong with variety of squares.  But about block 22 things started to get sticky.  I never imagined, when I started this project, that I would get this far with what I had.  I thought I'd make a few blocks and run out of squares.  And this project would stall out for a while.  Boy did I underestimate the number of squares I had!  (Take a peek behind Gabby on the cutting table to see the stacks - each stands about 3" high.)

But I made it.  I made 25 blocks, completely from my stash of squares.  That means I used up 600 squares.  Never mind the white pieces.  And no fabric was repeated in any single block! 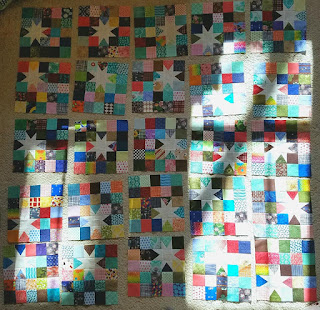 Another sunshiny day when I took this photo.  I finished these Monday mid-afternoon. 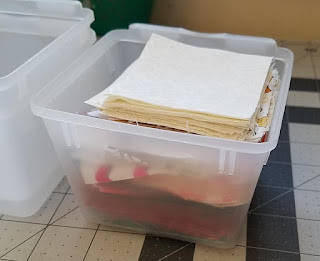 This small stack, about 3" tall (or a little less), is all I have left.  And if we're being honest here, a few of those lighter ones on top are left over from cutting for the stars.  I used up a chunk of fabric and if I had something that was not a multiple of 9 and couldn't be matched up with something else close for a star, it went into the stack.  But not too many were added.

But, as the Project Quilting prompt, "Put a Heart on It" was released about 24 hours ago, it was time to dive into that. The good news about this delay is that I was able to think about what I wanted to make while sewing.  So when I was at a good stopping point (because, seriously, if you've got it all spread out on your (messy) cutting table and have a flow, just keep going), I picked this up and I will add sashing, corner stones and borders later.  I think lighter grey sashing and dark grey or black cornerstones.  But a final decision will come after auditions are complete.

Moving on to Project Quilting... 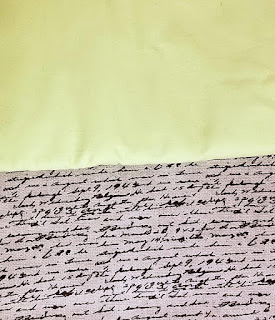 I remembered this lime green, purchased at the same time as the greens for the trees project, at a guild garage sale a few years back.  It's a few yards and a perfect background for my plans.  And the grey with writing...well, it was slated for something else, but I think it works well for what this quilt will be as a back.  And that something else may never happen anyways. 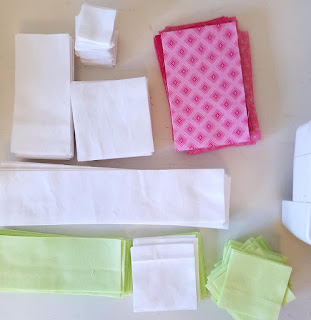 25 blocks worth of pieces here, though it sure doesn't look like much.  Cutting didn't take too long, which was nice.  So I was on to sewing quickly! 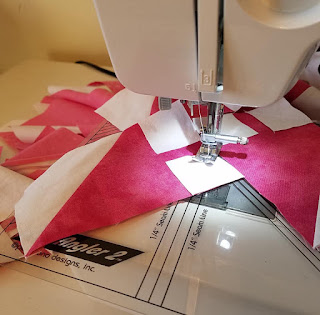 Me and my Angler2 had another date.  I don't know why I'm so stubborn about using this darn thing.  It makes life so much easier - no drawing lines to "lose" corners!

I sewed and sewed and lost a lot of corners, but didn't start making larger pieces by combining smaller ones for a while.

I played bobbin chicken and lost.  It looked like enough for the last 5 pieces, but apparently that first round of winding was not to the liking of my sewing machine.

And while rewinding that bobbin, I lost at thread chicken.  There was not enough thread remaining on the spool to completely fill the bobbin.

Thankfully, I was prepared and had to just pick a new spool of white thread out of the basket next to my sewing table.  Whew!  That could have been trouble!

Today, before I had to go to work, I got the blocks almost all to the just-one-seam stage, but time got short (and I ran out of bobbin again), so I stopped.  Now that I'm back home and have eaten (a real, not snacky) dinner, I plan to go sew a bit before bedtime.

I'll be back in a few days with a completed project.  My goal is Thursday night, but it might spill into Friday.  Time will tell.  (And when I come back, you will get to see what I've made!)

PS My back is doing much better.  Still a little stiff and twinges a tiny bit every so often if I move wrong, but compared to a week ago?  SOOO much better!
Posted by Katie at 9:01 PM

So glad to hear your back is better and I hope it continues to heal. Back pain is so uncomfortable! The star block pattern is so neat the way the pieces can be arranged to move the star around. What a great quilt and it uses up scraps! It sparkles! Your new project looks interesting. I like the pinks and greens together. I'll be waiting to see what they turn into.

I really like your little scrappy blocks with the white stars. I've had an Angler 2 for years, and have never used it. Why do I buy things I never use?!!! Will be watching for your next reveal. Glad your back is feeling better. ---"Love"

I'm glad your back is feeling better, too! Love your little scrappy star blocks - a great scrap buster! I'm looking forward to seeing what you do with the pink and green. And thank Gabby for posing - it's nice to know that she is such a great helper - and that she and Finn made sure your blocks had enough fur - LOL - ;))

I have the Angler2 as well and have had it for years, but haven't used it for ages. It is in my drawer and I just overlook it all the time. Maybe I should try it again. It might be useful!?! I like the scrappy star blocks. I probably have plenty of 2 1/2" squares to make one too. But, I'm not starting that now.