I prepped and packed three projects, not knowing what exactly would strike me to work on, but knowing I had plenty to keep me busy through the weekend (and then some).

I decided to start out with the December charity quilt.  I made time to cut this pile...

...into a kit before I left.  The fireworks was to be the border, so it went uncut, but everything else was ready.  We arrived shortly before lunch on Thursday and I dug right in.  I had a few mishaps and the seam ripper made an appearance or two, but before bed, I had all 16 blocks made and on the design wall.  (No photos - my phone has zero reception in the basement (walk-out) where we sew, so I left it in the room...where it had like one bar if the wind was blowing the right direction!  I took it the remaining days just for the camera and clock functions, but still failed to take many photos!)

Friday morning, up and at 'em early to get the top together!  I had more to do! 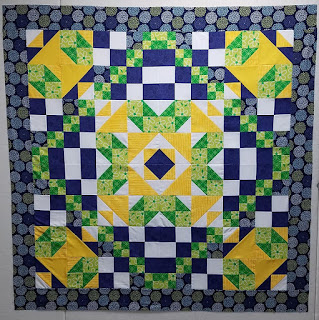 I didn't have quite enough of the reads-as-a-solid blue, so I patched in some of the border fabric.  It took some extra thinking to make sure they were symmetrically placed, but I got it done and this was NOT where the seam ripper made an appearance!

Everyone was hollering it needed a skinny inner border, but having brought all the fabrics cut and leaving all the extras home, I had no real options.  And in my head, as I was using the border fabrics on the edges of the blocks, I thought the borders "bleeding" into the blocks might look cool.  An inner border would end that.  So I argued back.  It will be fine.  And it is.  It's about 58" square.  And all scraps.

Midday Friday brought out the other two projects.  And a face.  I didn't know which I wanted to start.  Neither were screaming at me, but I wasn't going to sit around for another two days doing nothing.

The winter quilt my sister-in-law got me for Christmas lost. 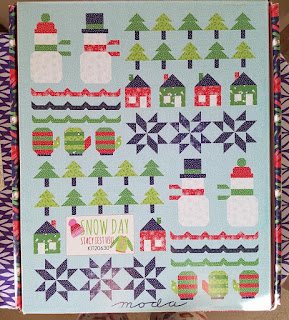 (I spent a good portion of two days cutting this out before I left, but it will get made eventually, so it will be fine.) 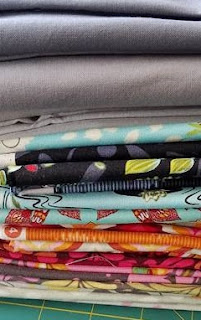 Remember the Bird Seeds quilt with Tula Pink fabrics I started on Drummond Island in 2017?  The "birds" were made on the island, as well as a few "seeds", but it has been a very stop-and-go, neglected project since.  Prepping all the seeds seemed exhausting and, for whatever reason, even when they were prepped, just sat in my sewing room while I thought "hey, I should go get those and work on them while I watch this movie"...

It was a complicated project if I wanted to make it just like (or nearly like) the original.  Since that is what caught my eye and drove me to spend way too much money on a fat quarter bundle of out-of-print fabrics, I better do it that way, right? 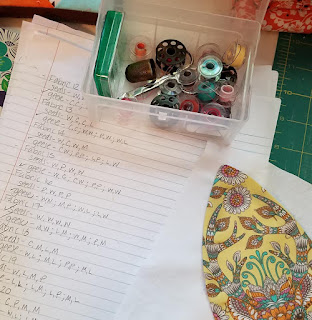 I had written up quite the instructions for what background colors went to with what fabrics and somewhere along in 2019, I finished prepping all the seeds.  I think it was the second, fall, trip to Drummond Island that prompted me to prepare those.  And I remember working on quite a few there, but it was not all and they were again abandoned.

Do I want to sit in a desk chair at a table and do hand-applique?

But I did.  It'll be fine.  (I feel like this would have been even better and funnier if we had been drinking wine, but alas, this is an alcohol free facility!)

With each seed finished (they were appliqued to a 7" square that was to be trimmed down to 6.5" if you want an idea of size), I added them to the design wall.  Next to the green and blue quilt.  More than one person asked if they were borders for the quilt.  While making "that" face.  I laughed and told them yes.  And laughed more.  Silly question.   But I guess everyone has their own taste.  And I did tell them the truth eventually.  As if they wouldn't have noticed later...

(Truthfully, I left the other quilt on the design wall to stake a claim on the space so I could lay this quilt out later!)

Friday night I went to bed with something like 15 seeds left to sew.  They go fast, but there were, I think, 33 of them to do.

Saturday morning, up and at 'em early again, because the end was in sight!  Soon I can lay them all out and see it!

I had my key.  Every single piece had to be placed individually.  With 5 backgrounds and 27 fabrics, all more-or-less color graduated across the quilt, there were a LOT of combinations.  It took For. Ever. but I got it done.  By the time I was to the bottom, though, my thighs were getting a good workout of squats.  A workout I still feel the aches of two days later!

But.  It was worth the effort.  So worth it.

The design wall was tall enough.  I was not.

I did the seeds first, then the birds.  And by the time I had this about halfway up, everyone in the room had stopped by to drool or compliment or encourage.  While the components are simple, the layout is not and it was quite different from pretty much everything else going on there.  (Plenty of beautiful traditional quilts, some more modern than others, but only one complex paper pieced pattern going together that could compete on the level of complexity.  Oh wait, here's a link to her gallery.  She is a designer and her stuff is amazing.  She works on "work" at retreat and this year she was putting together a blue and white option for an upcoming block of the month.  Her stuff is legendary!)

Anyways, next it was time to sew everything together.  The geese were done first so I had whole blocks to work with and then rows started going together.  Saturday night I went to bed "early" (headed up at 10pm, but didn't stop chatting till about 11:30 - the night before I think we went to sleep at like 2:30!) and I believe I had the rows together.  That was my ultimate goal, as transporting that home would be easier.

I sewed like a maniac and, with just a little sewing after a quick lunch (where I inhaled my food and left my friends chatting while I headed back down to sew), I had the top DONE! 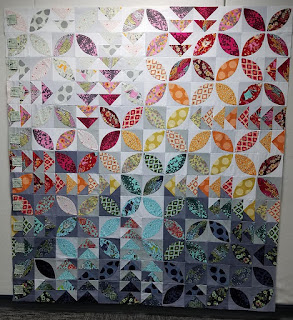 It shrunk a bunch, so I could get it all up off the floor.  And there is a fluorescent ballast just above the quilt, so the top is more washed out than it really is...but the bottom also seems darker than it really is...  But it's a TOP!  2.5 years in the making, but I am so excited to have it done.  I've seen some really amazing quilting done on these, so I'm going to have to find my big girl panties and take a lot of deep breaths for this one.

Do not despair, though.  Please don't think all I did was sew.  I sewed more than some folks, but I also made not one, but two trips out to local quilt shops!  The first trip I spent some money...

I bought some patterns at the first shop: 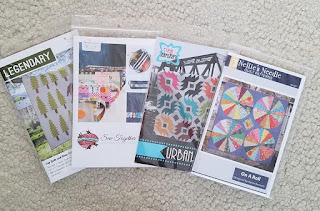 (I'm gonna make my dad that "Legendary" quilt - it has a Sasquatch on it that, unfortunately I didn't get in the photo.  But shhhhh!  Don't tell him.  It's a secret!)

(And actually, that pattern second from the right was a freebie at the second shop, but whatever.)

And, at the second shop, after looking over pretty much everything and not choosing anything, I saw this: 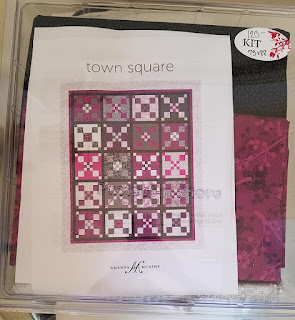 The fabrics in the kit were next to it, the whole thing it's own little display and it barely caught my eye before I decided it was MINE! 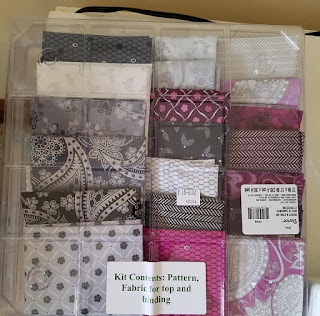 Though this photo doesn't do it much justice, it gives you a better idea of the fabrics.  Grey and that beautiful purpley-red.  There are some with silver printing on them, but not enough (I hope) to make my longarm angry (too much and it gets the needle gunky) that add a little extra oomph.  I can't wait to get started!

The second trip to the quilt shop was more for my friend, who ran out of projects (a recurring project for this speed demon!), and I checked their bags of scraps.  Deciding I should stick with my OWN scraps, I purchased nothing more.  But it was a nice break.

But before I can dig into the new kit...season 11 of Project Quilting has started!  There is no viewer's choice voting this year for you all to help with, but I won from the random drawings last year, so why not try again this year?!  This first challenge is all about numbers and I have a few ideas, I just have to decide what I want to make...hmmm...

There are still three completed quilts from 2019 that need to be blogged, but this has gotten long, so I'll save those for another day when there is less to share!

Off to the sewing room to see what "numbers" I can scare up!

Your December charity quilt looks good - and the winter quilt will keep you busy at some later date - as will the purple/grey kit - but the "Bird Seed" quilt is AWESOME!! Great choice for completion at the retreat!! You kept saying - It'll be fine! - It IS fine! - ;))

Sounds like a very productive retreat! I really like the seeds quilt. I looked for birds and then decided you meant the flying geese. We are in Albuquerque NM on our way home from Florida. Yesterday DH drove 710 miles. At this rate, we should be home by about noon on Friday instead of Saturday. Can't wait! I haven't given much thought to blogging about what I accomplished last year and/or goals for this year. I know I want to get my Moda 6" blocks put into a quilt. I also have some 12" blocks that need to become a top and then a quilt. DS#1 gave me a gift certificate to my LQS, and they are having a sale on their basement sale fabrics which will give 20% off of the already 40% sale price. Hopefully, there will be some good fabrics left by the time I make it there. I hope that I won't obsess too much about quilting and will get other things done too - like reorganizing my pantry & stuff like that. Happy New Year!