getting back into the swing of things

I seem to go in spurts of sewing lately and the week of Thanksgiving I did little.  It didn't help that I was scheduled three days and picked up a fourth, plus a LOT going on for the holiday itself.

But I did manage to find time before the holiday to cut out the charity quilt to fulfill my November goal... 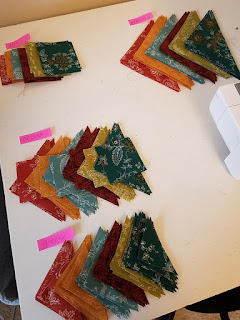 ...cut out would be the part you need to focus on.  Because after this, I managed to pair them up for blocks and not much more before the month ended.

But I did start sewing on them the other day and got the first two done (they are done in pairs). 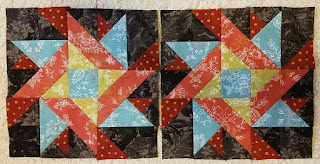 And then, over the last few days, pacing myself, I managed to make the remaining 14, finishing just a little while ago today. 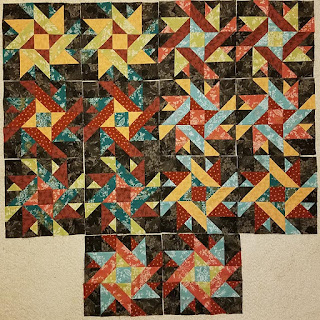 These get set on point with square-in-a-square cornerstones and whatnot, but for now, the blocks are done.  The colors aren't great in that second photo, they are much more true in the first.  But this is what happens when it's nighttime so many hours each day - bad lighting!

I think these might stall out here for a bit, but they were in the way, so needed to be sewn before anything else could really happen.

Other projects include finishing binding and labeling quilts, quilting another quilt I've decided to liberate from the Closet of Shame, the next two blocks for the Little Miss Sawtooth quilt along and... 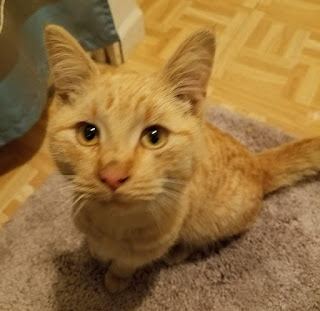 Meet Finn.  He is about 7 months old and previously belonged to my brother-in-law and his family.  Because they are bad pet parents, they decided he was too much work and let him live outdoors.  And then decided he could go live with my in-laws in a mechanics garage.  He is a housecat.  Neither of those choices were good ones.  So, Thanksgiving night, this guy came home with us. 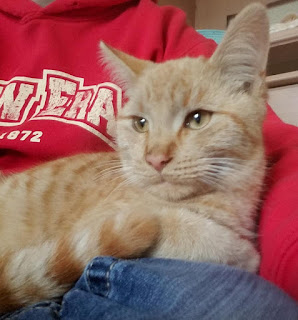 Friday I had to work, but when I got home, he curled up in my lap as soon as I sat on the floor.

Saturday I also had to work, but he found a quilt on a couch and flopped himself into it and fell fast asleep. 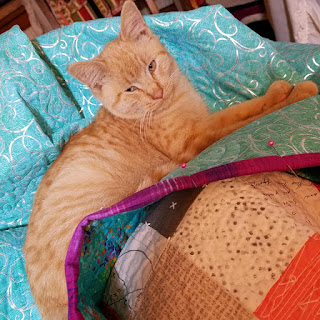 Sunday, the hubby had to work, so I had the evening to myself and I decided to work on quilt binding.  He plopped himself in my lap and made himself in the way.  He did not chase the pins or thread, but my arms ached from holding them at an unnatural angle while he sat between me and the quilt. 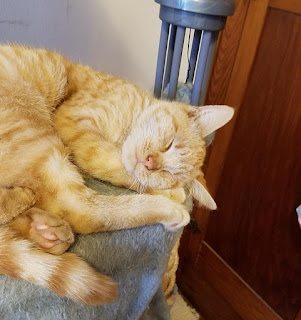 Today, he went to the vet to be tested (feline lukemia negative!!), get a few shots and a general exam.  Other than fleas (not a surprise), he is healthy and, once home, found the cat tree while I sewed. 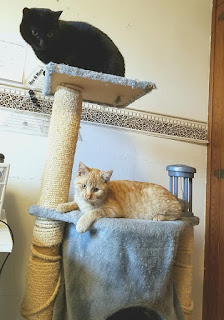 The cat tree was shared.

Finn hisses at Freddie and Gabby hisses at Finn.  Otherwise, things are going fairly well.  Gabby was mad for a few days, but after putting food under the couch, upstairs, where she was hiding for three days, she finally realized Finn was staying and I wasn't neglecting her.  (Of course, when I go up to bed, she comes out from hiding and demands ALL the pets while I'm trying to sleep.  And if I don't comply, she scoops, with her adorable little feet, as much kitty litter as possible out of the litterbox onto the floor.  Until I give her a ball of paper.  Which she promptly shreds all over my bed.  I'm not sure which is worse to clean up, but they're all adjusting in their own way and it's going far better than it could have.)

And with that, I believe my dinner is nearly done (lasagna in the oven) and the hubby was just brought home from work by his mom and brother (not the one who abandoned the cat) because he is so exhausted he can't stay awake.  I'm worried about him, but aside from the emergency room am not sure what to do...here's to hoping some rest tonight will help!

I hope that all is well! Sounds like your cat rescue/adoption is a success!

Welcome to Finn! And I hope your dear hubby gets some good sleep and kudos for recognizing his level of exhaustion and getting a ride home - such a good and safe decision!