2018 rainbow scrap challenge is a TOP and one other project...

This week has flown by.  I was scheduled to work Tuesday and Thursday mornings, which makes for short sewing days, but I planned to make the most of my day off, Wednesday.

Originally, I was going to make tiny stars.  But Responsible Katie said I should cut the sashing strips for my rainbow scrap challenge blocks so they'd be ready for sew-in this weekend.  (I got to go both Friday and Saturday!)  That makes sense.

So I cut those.  No photos.  Nothing much interesting, really.

Then, Responsible Katie saw the new red, purchased to make the Summer Fun quilt larger, sitting there on the cutting mat and said I should just work on that.  Use the fabric, put it away.  Instead of working around it to make tiny stars.

Now where did those notes go? 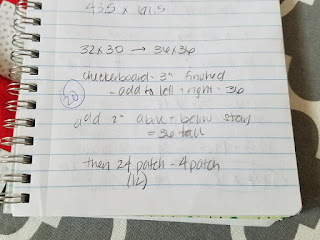 These took a while to find because, well, do they look like anything useful?  I was pretty sure they were in this notebook, but thought I'd drawn a few diagrams or something.

But you know what?  They were right!

So I took apart some of the quilt, added a few rows of sashing to make it a little taller and then sewed another batch of checkerboard borders and it was done!  36x36, as predicted! 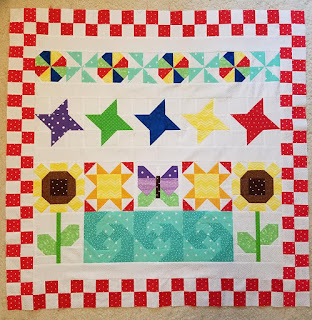 I think I like it with the sashing strips between the friendship stars.  They looked a little crammed in there before, so even better!

I should have cut and made binding from the red before I put it away, but oh well!  Later?

But, midway through this project, my boss called.  We did inventory this Thursday and there was a lot to be done in preparation for that event.  Like major tidying up in the store.  And she hadn't done a very good job of scheduling the right people for that.  So I agreed to go in later and help.  Having been scheduled only two shifts last week, the extra hours weren't a bad thing either.

So no tiny stars happened this week.

This weekend is my guild's sew-in and I was able to attend both days!  I have no idea what happened that I wasn't scheduled to work Friday or Saturday, but I'm not going to complain!

Friday morning I packed up my rainbow scrap challenge blocks, sashing, and all the other assorted necessities and headed to the library where our event is held.  The room is large and, sadly, the sew-in is poorly attended, so I knew there'd be plenty of room to lay everything out, fiddle with the arrangement and sew it from the floor.  At home, I don't have nearly as much room, plus I have "helpful" cats...and a hubby who would allow the quilt to lay in the middle of the floor for a few days, but wouldn't be happy about it.

So 75 blocks were layed out into 25 groups of 3 based on the photo from the book.  Well, sort of.  Mine aren't in exact locations of the original, but I grouped them by color and placed colors in about the same locations.  But since my blocks were a range of colors in each group, I tried to put like colors in groups of three to make it more cohesive.

The layout (that probably changed a touch in sewing because I wasn't being careful with directionalities): 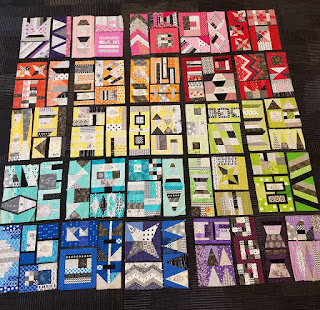 The pinks gave me the most trouble because some are more orange, some more red, etc.  But I got to the point that it was good enough.  I wish I'd limited my colors a bit more on some of these, but in the end, I knew it would be fine.  With all that variety, a few oddballs will blend in just fine.  And I'm NOT remaking any of those blocks.

So I started sewing the sets of three into blocks.

That took For. Ever.

But I was doing them one at a time and pressing after each seam.  And being a genius that I am, I set up the ironing board across the room from me.  Why?  I don't know.  It seemed like a good idea when I put it there!  But it did get me up and moving a lot, so it made up for all the chocolate I ate!  (Thanks Carol!)

By the time I went home (5pm), I had all the sets of three sewn into 25 larger blocks.

Up and at it early again this morning, I started sewing the sashings to make vertical columns.  Usually I go horizontally with my sewing rows, but for whatever reason, this quilt seemed to need to go vertically.  It doesn't really matter, though.

By lunch I had the blocks sewn into their columns! 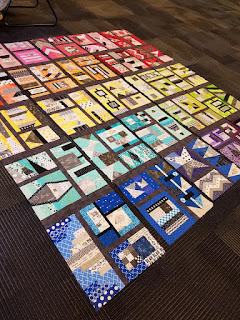 It's not easy to distinguish the sashing from the carpet, as it's a darker grey.  It looks kinda like grunge and kinda like cork, but is neither.

Back from a delicious lunch at a local outdoor (food truck-like deal) barbecue place (I even smell good from the smoke billowing around us while we ate!), and it was on to the dreaded long seams.

A few hours later, those were complete and I had a top.  Then I needed to decide about outer borders.  The pattern calls for 6" finished.  That seemed excessively wide, so I decided to go narrower.  One quilter friend suggested 4", but I opted for 3", knowing the wider borders always stump me when it comes time to quilt.  I feel they need special treatment when they get that wide and I never know what to do. 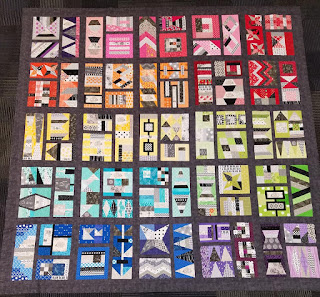 Looking at it now, maybe the wider border would have been a better choice visually, but I'm not taking it back off and adding an inch wider border!

There are a few issues with a few blocks and a little issue with some of the columns not lining up with each other as you go across horizontally (and I should have known to line those up when sewing, but I got so excited to be almost done, plus dreading the seams in the first place...), but this is going to be used, so once it's draped over a person, you're not going to notice it much.  So I'm good.

I wanted to stay later and piece the back for it, as well as make the binding, but my friends were ready to pack up and go.  And since I was the only one left capable of lifting the tables to put them back, lift the chairs to put them back and run the vacuum to suck up our stringy bits, I had to pack up too.  (Well, I could have sewn alone...but that's not fun!)

So I'll get those parts done at home and this quilt will be ready for the longarm when the weather cools some.  Temps have gone back up into the 80s during the days this week and will continue to be such for a few more.  Thankfully, though, temps at night are dropping to comfortable sleeping weather, so at least we can get a good rest to prepare for the next warm day!

Time to go help the hubby wrangle cats - the softener needs salt and it's harder than anything to get the cats back out of the basement (where the softener lives) if they get down there.  Plus they're a major trip hazard when they try to "help" us down the stairs...

That is gorgeous! Congratulations on getting all these blocks sewn together!

It's so beautiful!! What a fantastic quilt. It looks like it was totally worthwhile to wrangle all the blocks into place :)

Your Summer Fun Quilt looks great - glad you found your notes - and that they worked! RSC quilt - your version of "good enough" is flat out AWESOME!! - The grey sashing works wonderfully - it shows off the detail in the blocks. If you still think it needs a wider border visually - you could always add another border to what you already have instead of taking it off and redoing it - two smaller borders rather than one really wide one might be easier to quilt - ;))

Yay, Katie!!! I didn't have a handle on how your RSC quilt was going to come together. It turned out great!!!

Your RSC quilt turned out beautifully!

That is one beautiful quilt! Congratulations!

And after I made the earlier comment, I went scrolling to try to find out if you were using a pattern...What an inspired interpretation of Elizabeth Hartman's city! All of a sudden, I want to take out the pattern I bought several years ago and make it. Can't forget that little quilt with the checkered border- it's sweet.

Beautiful finishes especially the rainbow sampler one. It has so much personality.

Beautiful RSC quilt! Love all the variety in the fabrics, and the sashing is perfect. Congratulations on a nice finish!

I love Summer Fun, it is such a cute quilt and so cheerful! I had a hard time imagining what your rainbow quilt would look like, it is amazing! Glad you stuck with it to the finish!

It just amazes me how you got all those different blocks together! It turned out great! ---"Love"

the RSC quilt is so different than what we tried to picture each month as we see new blocks being added to the pile... I like it - wouldn't want to do it, but I like it. You did a great job with it. Seeing it laid out right at my feet helped make more sense of it; wish I had been there Saturday to see the top completed ( well, I'm not wishing THAT hard - my reason for not being there was WONDERFUL).
Ok, what's next ... another hundred or so of wonky little stars?

BTW: you're welcome :) I hope there wasn't any left that you had to take home with you lol

The quilt top is GORGEOUS!!! I wish I could see each block closely. I am sure you will share more pictures once it is all quilted and done. I hope you don't pay too much attention to responsible Katie. At least not all the time. Fun-loving Katie may want to chase some squirrels. They are a hoot and a half!!!

Ha ha. Cats can be so helpful sometimes. My daughter brings her to visit, which is my only recent experience with cats.

Both of your quilts look great. I'm impressed with the last one and the variety and arrangement of blocks. I like your 3" border around the outside edge. I think it looks the perfect size.

RSC is every bit as stunning as I hoped it would be - perhaps even more so. I hope that when you took a step back you gave yourself a pat on the back. The extra washing’s on Summer Fun were a good idea. Somewhere for the eye to rest. Love the checkerboard border.