It's been an odd week here.  My hubby is on vacation, which means my routines are disrupted even more than usual (working every third day is enough disruption!), so I'm trying to squeeze in quilting stuff when and where I can.

Monday afternoon, I finally talked myself into testing the tension using the King Tut variegated thread I'd purchased.  I think I may have mentioned I bought quite a few colors, but had kinda settled on just using this one coral-red cone instead of many thread changes...and lots of tails to bury!  But King Tut is a little heavier (and a LOT lintier) than the thread I usually use, so I knew there would be some tweaking of tension. 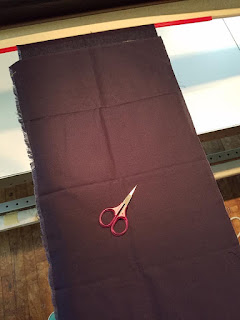 Not a very big piece, but some dark blue solid I don't expect I'll need.  And the coral will show up really well, so I see what needs adjustments.  (It IS pressed, just looks terrible in this photo!)

I did ask for help from a facebook group of Innova owners, and the consensus was that I should need to do little.  I was wary, but if you've seen the masterpieces these folks post, I was willing to believe they might be right.  My last experience with this thread was not great, but it was the only thing close in color, so I was going to master it.  The best advice, though?  The thread is super linty, so blow out your bobbin case after every single bobbin.  I also re-oiled.  It took longer, but only one bobbin change gave me trouble.

So my practice piece? 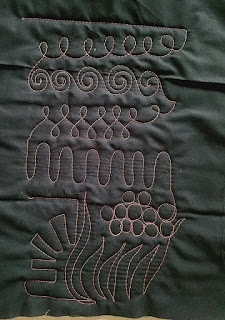 I changed very little, but kept trying different designs to make sure it wasn't going to do something wonky with a new direction.  And other than what looks like pulling there on the middle design, everything looks great.  There were thread pokies on top in a few spots and some on the bottom in others, but nothing consistently wrong on any side, so I decided it was good enough.  (And once it's washed, I hope most of that will go away on the actual quilt anyways.)

It was early yet.  I expected this would take quite a while.  And perhaps some new, made-up curse words, to get it right.  Load the quilt?  Sure!

I wound five bobbins, figuring that was a good place to start, but still not entirely sure HOW I was going to quilt this monster.  My original idea was to do different motifs in all the sections, using matching thread.  I was going back and forth with doing just an overall design?  (I'm partial to swirls, but have gotten kinda sick of them...and they are starting to look like octopus arms, too...)  Should I still change threads?  That will hide a multitude of sins on the top.  (The back is busy, but not THAT busy!)  Or do the different motifs in the coral? 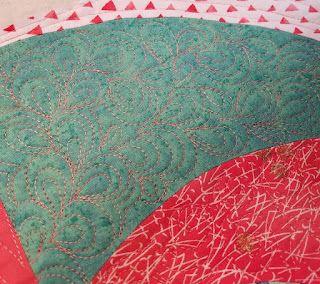 Oh, those paisleys will look wonderful in that turquoise! 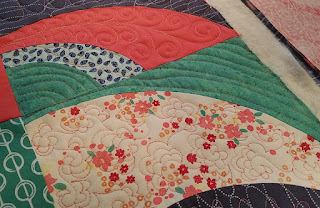 And that swirl feather in the coral?  Love it!

But please ignore my bad echoing.  It continues throughout the quilt.  So now, like my messy pebbles, it is a design element, not a mistake.

As I finished the first pass and went to roll the quilt, the quilt and excess batting were on the floor.  In a few more rows, I'd have it all off the floor, but at the start, this is how it goes. 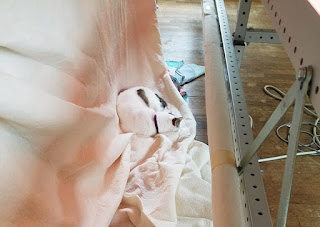 Oh, hi, Emma.  Thanks for helping.  This really does resemble helping more than the next photo...

I sewed a while.  Through four bobbins, in fact.  A bobbin will do about 6 or 7 blocks and each row is 8.  So most of a row.  But that means 10 bobbins for the whole quilt!

(I read something somewhere that estimated the amount of thread you'd need.  I remember for a king-size quilt, heavily quilted, they estimated something like 1500 yards.  You'll see how silly that was, too, soon!)

It was getting late and I needed to tidy up and wanted a little time to wind down before bed because I had to work Tuesday morning.  So I tidied up and put aluminum foil over the edges of the quilt.  Expecting that would keep the cats at bay.

At work Tuesday, my hubby (remember, he's on vacation?) sent me a video of Freddie on the top rail, paws on the top of the longarm, just checking things out.  When he hopped onto the quilt itself, stretched between the rails, the video ended because the hubby got him down.

He hadn't done much damage, and I managed to roll through another bobbin Tuesday after work.  But my quilting time was short-lived for chores...and remember, the hubby is home...so I tidied up again and knew I'd finish on Wednesday.

I woke up to find a DENT in my quilt where I'm pretty sure Freddie slept most of the night.  And some batting trouble... 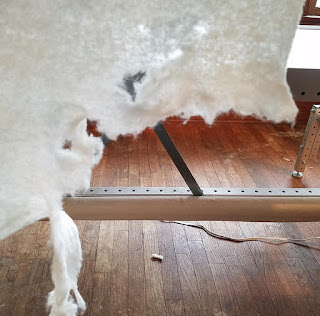 The batting monster had a midnight snack.  (And then a nap...) 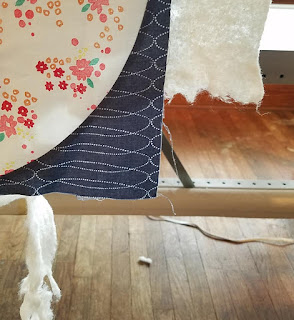 Thankfully it's at the corner/edge and I was able to cut out and replace the spots (there's another smaller one towards the bottom-center, too) without much trouble.  And he didn't eat the batting...or not much of it...as evidenced by the balls of batting all over my floor and quilt.

That dent...caused a pucker on the back... 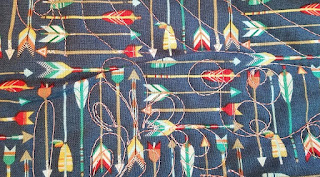 ...first one ever on my longarm.  I was able to ease the stretched fabric on the front because I could see it.  The back...I hoped for the best and really, this isn't that bad.  And I said the back was busy...busy enough to hide this pucker fairly well!

But as my work on the quilt began on Wednesday, I started to worry about how much thread I had left.  I wound five more bobbins and really started to wonder... 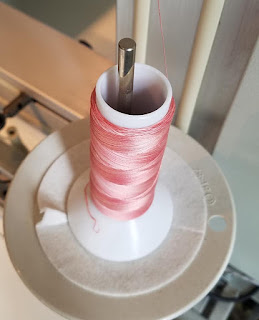 So I sewed on and mentally prepared for running out.  I could order more.  I could switch thread colors to finish up.  It would all depend on how early I ran out. 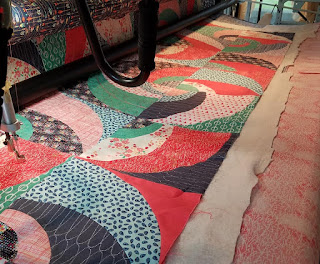 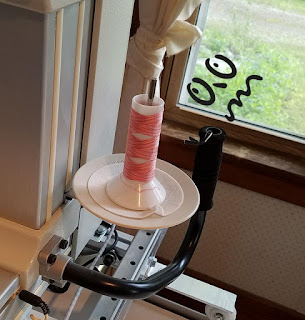 (Maybe this was at two blocks to go?  I can't remember.  But close to the end!)

By the end, I was having trouble not speeding up my sewing.  I find that when I know I'm getting close to the end of a bobbin or spool, I try to sew faster.  As if THAT will make the thread last longer!

I did modify my motif choices some (swirl feather instead of paisleys in one area and less echoing of swirl flowers in another) to help ease the thread issue, but was still wondering... 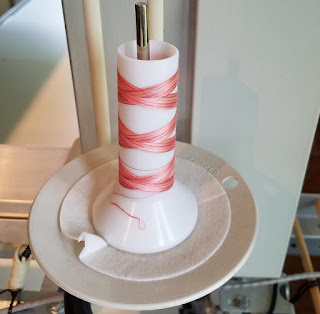 And then I was done.

The bobbin was nearly empty, too!

So remember when I said a king size quilt, quilted heavily, was supposed to take like 1500 yards of thread?  This quilt is 76x76.  Not king size.  Nowhere near that.  Quilted heavily.  That spool?  2000 yards.  I'd say their estimate is wrong.  Or dated...you know, overquilting is the thing now...and I jumped on the bandwagon!

I believe I also mentioned a while back that my back was JUST big enough.  So, in the last pass photo above, you see the coral I added to either end to make it larger enough for the longarm.  And then I trimmed that off and used it to make binding! 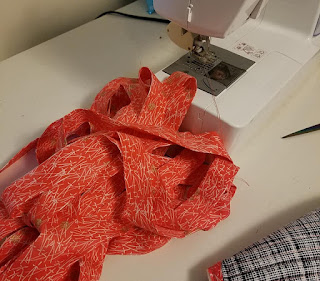 The hubby was at the doctor, so I took advantage of the time and got the binding made.  I was pressing it in half when he got home and wanted to go to the nearby drive-in restaurant for dinner.  I couldn't get my shoes on fast enough!  He doesn't like to go there often (the greasy, deliciousness does not sit well with our aging stomachs), so I was excited!  It was delicious and my stomach handled it better than expected!  (I think a lot of my stomach troubles were due to stress at my last job because, in general, it is complaining a lot less in the last year.)

Today I will get that binding sewn down and then I have this quilt plus the baby quilt to do the hand-sewing of binding.  The baby quilt needs to be done first to make it in time for the baby shower.  But this one also has a hard deadline...less than a month, but plenty of time to procrastinate.

Tonight begins graduation season.  I have a niece and nephew both graduating this year, as well as two children of cousins (on the hubby's side).  So there will be many open houses and such to attend in the coming weeks, but I'm proud of all of them.

Happy quilting,
Katie
Posted by Katie at 9:37 AM

The first pic of Emma 'helping' is what Chewy does and this time it wouldn't matter so much since he's black and so is the batting, but I don't want to encourage him. To make sure that he doesn't sleep on it overnight and so that no one decides to help themselves to the batting, I bring the top and batting up and lay it over the head of my machine. I quit using the cotton threads because they were ALWAYS giving me tension issues and I'd have to try and figure out if it was top tension, bobbin tension, the position of the eye of the needle, yada yada yada...too much 'work' for something that's supposed to be enjoyable. You really lucked out on not running out of thread before finishing the quilting... that was pretty darned close.

Boy, did you luck out with not running out of thread!! That was a little too close for comfort - but you can relax now and play with the binding - or procrastinate - LOL - ;))

Good Grief! That was close! I'm worn out worrying about too it as you typed line by line! It really is going to be a striking quilt! Glad it worked out just right for you! ---"Love"

What an ordeal! You got it done though with plenty of time for binding it - plenty of time to procrastinate even!! I love your idea of doing different designs in each section. How many different quilting designs have you done? I have been doing a lot of quilting also. I had some things basted that had just been sitting for months. One was a Christmas table runner that I had to remove 1/3 of the quilting, so I procrastinated on that for a long time. I finally finished it - I must have started it last November to have for the holiday craft sales. I still have one more Christmas table runner ready to quilt. I have been having tension issues with my Janome 6600. I will be quilting along and then will notice that the tension changed on it's own. I really should take it in for service. Maybe they can tighten the knob so it won't change on me - I guess its just from the movement or giggling of the machine when I'm quilting. A lot of time I have different color threads on the top and bottom, which doesn't help. But if my backing is white or lightish, and the top has dark sections I don't want to use dark thread on the back. What a pain.

By the skin of your teeth girly! That was as close as it gets. I'm looking forward to seeing a full size photo of it. The quilting motifs are fabulous.

Glad to see the thread made it, that was pretty close! Love to see the kitties helping, they do it so well. The quilt is looking beautiful, can't wait for the reveal!