Bernie over at Needle and Foot is asking us quilters, in honor of April Fool's Day, to share our quilting oops over the years.  To help those other quilters out there know that none of us are perfect.

I make a fair amount of mistakes and those who read my blog know sometimes I even remember to take photos of these troubles!  The ones that really make me angry are usually the ones that don't get photographed.  But more often than not, I just laugh at myself and go figure out a solution.

But in honor of the request, I went digging for photos and thought I'd share a few from the past (some more recent than others!) to make you all laugh.

First up is one I'm REALLY glad I had photos of.  No matter how hard we try to make sure our quilt backs are big enough, sometimes it just doesn't go right... 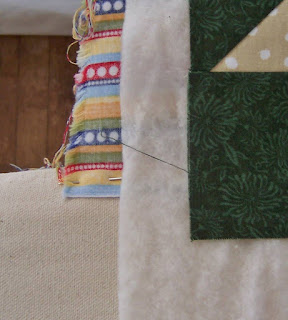 As I got to the end of quilting this baby quilt, I realized my backing was just about an inch too short.  I probably could have done it, had I loaded the top more carefully, but this was no fun.  (And if you quilt by check, your longarmer will be even less impressed with this...) 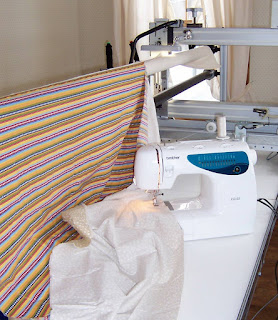 ...my little machine sat nicely on the table behind the longarm and though I had to move the machine as I sewed down the quilt, I got it done.  (And this is not the only time this has happened...even though I AM more careful now!)

Another older one is this block.  It looks fine here... 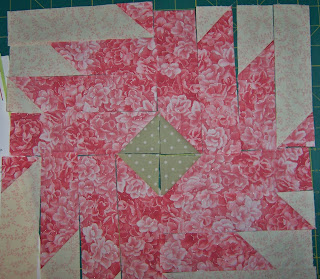 ...but the reality is that those green triangles should be making a pinwheel.  I went with it and the finished quilt looks just fine.  And unless I tell you, you'd never know it wasn't on purpose.  (I may have a few more of those hiding...but I'll keep those to myself!)

And then there's this gem... 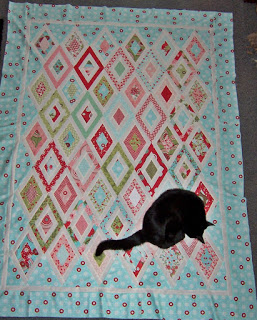 ...for whatever reason these borders came out wavy.  I don't remember the reason, but I do remember that I was frustrated, so it got put away.  I knew that it was a problem, but instead of fixing it, I just put it in the Closet of Shame.  Sometimes borders just give you trouble.  Eventually, I removed both borders and quilted it.  The edges were still a little waffly (which may be in part due to bias edges and stitch removal), but not so much I couldn't quilt it out.

Then there is the APQ blogging buddies swap quilt.  That also had wavy borders.  Not as obviously wavy borders as this one, so it made it onto the longarm and midway through quilting before I realized I had a problem... 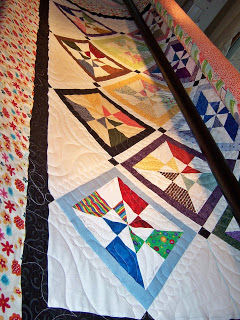 ...you can't see them here, but there are tucks in the floral border.  I was annoyed with myself for not figuring it out sooner, but stubborn enough to not take it off the longarm and try to fix it midway through quilting.  (Can you even DO that?!)  It hangs on the wall in my bedroom and I've learned not to cringe at the tucks, but rather see them as a learning experience.  (And really, having all those blocks made by my blogging friends is much more the focus than a tuck or four in a busy border.)

Some more recent errors include sewing this quilt top together wrong while on vacation... 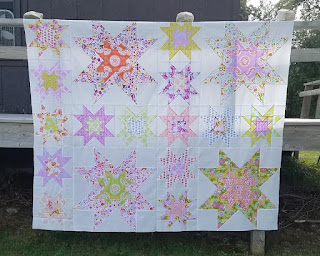 ...and not realizing it until sending this photo to a friend on the way home.  (We had no cell service up there, so it had to be done later!)  While this layout doesn't look bad, it's not the offset layout in the pattern...the pattern I wanted to make.  So this has been remedied, but the top is still waiting on the Rack of Shame.  (Not as hidden as the Closet of Shame, but the same idea!)

Also, there was this mistake in The Unicorn... 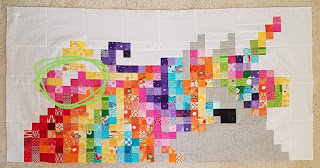 ...I sewed a few rows in backwards.  And did remove them from the middle of the quilt and attempt to fix them by flipping those rows around... 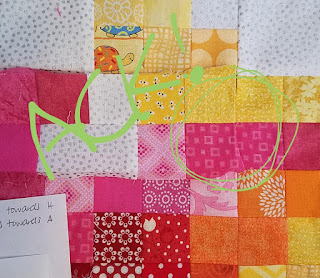 ...and found further deconstruction was necessary.  This one was fixed because I couldn't handle it not being fixed.  And my unicorn took 4th in the viewer's choice voting.  Not that I think it would have fared worse for the mistake, but I knew!

Even more recently, I participated in the Fat Quarter Shop Worldwide Quilting Day challenge.  That closed yesterday and they're choosing their favorites and then you all get to vote for your favorite among them.  Who knows if I'll get anywhere, but I tried!

Anyways, I decided to make mine half the size of their mini (because I'm crazy or something) and my first round of flying geese to be used for the stars, I managed to reverse the colors... 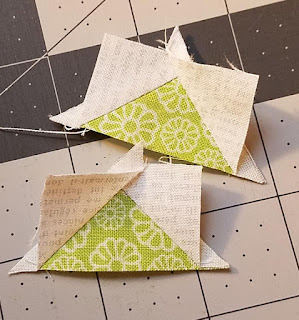 ...you see, the stars are NOT supposed to be white, but green.  Ah well, I only made four incorrectly and plan to sew them together and make a tiny pincushion or something.  I was happy with myself for not having gone full steam ahead, though, and cut them ALL wrong!

And finally, we can't have a post about things going wrong without a photo of one of (MANY) times I've sewn over pins and, um, forcibly changed their shape... 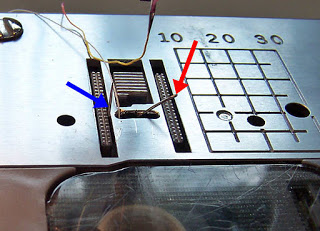 ...yeah, I sew over pins.  Sometimes I stab them with my needle and the glass head of the pin flies off and the remainder of the pin bends to the will of the needle and ends up partly inside the machine.  For this reason, I have a needle nose pliers in my sewing supplies.

I still sew over pins.

I try to not sew THROUGH them, but you know, sometimes it just happens.

So there you have it.  I make a lot of quilts.  I have a lot of success.  But it's not all sunshine and roses over here.  Sometimes things just go wrong.

Time to go get cracking on that baby quilt.  Because a guild friend may or may not have gotten me thinking about participating in the Pantone color of the year Quilt Challenge.  She merely suggested it and though I already knew about it, somehow her suggestion got the wheels turning.  I may be headed to my local quilt shop later to procure the pattern I'm considering...

But in the meantime...

P.S. How can I manage to not share this?  It fits so well! 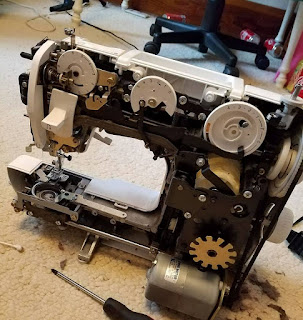 Because sometimes when your sewing machine just flat out stops and you know it didn't cost that much, you and your husband just tear the thing apart.  I bought a new one.  This one didn't make it.
Posted by Katie at 10:26 AM

Oh my goodness, what a fun post to read! I'm smiling at your kind of seven degrees of separation for your shame quilts -- the closet of shame, the rack of shame -- I can relate! Hahaha! I've quit sewing over pins since I got my new machine because I'm afraid of wrecking the machine, but I've done that to pins on my other machines! Thanks for the fun post!

I sew over pins and have had the issue of the pin getting stuck in the feed dogs, too.

The perfect post for this event!!! So many mistakes - but it is going to happen. When we cut sooo many little pieces and sew soooo many bits together - how could it not??

Like Wendy, I love the Rack and Closet of Shame. Hahaha!

Good for you getting a 4th in Viewer's Choice!! That's wonderful.

Have fun with the Pantone Color Challenge too. Gorgeous color for this year.

Oh my, I loved your post! We all have oops-es once in a while. I just got my machine back from the shop because I did a big oops. I had been sewing with a zig-zag stitch, got distracted and changed the foot to my 1/4" foot but forgot to change the stitch. When I lowered the needle to shut the machine off, the needle hit the metal foot, not the space where it should have gone, broke the needle and messed up the timing so it wouldn't sew at all. Had to have it fixed and paid for it! Bad thing, it is not the first time that happened, I have done the same thing before, a couple of times!

I LOVE reading your posts!! It's true that none of us are perfect - but we have a good time anyway - LOL. Most of my blog reads like one quilting oops right after another - ;))

OMG closet of shame and rack of shame. Love it! Not all sunshine and roses ...
I too have torn apart vintage sewing machines. I have yet to get one to work right without sending it to the shop tho.

I literally laughed out loud at the Closet of Shame and Rack of Shame! I enjoyed your post so much. :D

In our almost two hour long conversation on the phone the other day, I don't think you ever got to the part where you told me whether you got the pattern or not; I know you went to buy it, but I think we got to talking about the fabrics you have for it and didn't mention purchasing the pattern.