It all started out innocent enough with the Project Quilting challenges...and I thought I was going to resist the Pantone challenge.  But a little squirrel came whispering in my ear about a quilt I'd seen that would be perfect.

In my last post, I shared the first fabrics I purchased.  I only added one, but what I ended up with was not what I initially expected to use.  I thought I'd use a gradient of the coral color, not add a few other colors...to refresh your memory, here was the initial purchase: 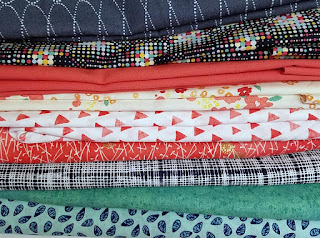 I only added one fabric, but when I went shopping in the $5 sale room, I also picked up some backs for other quilts... 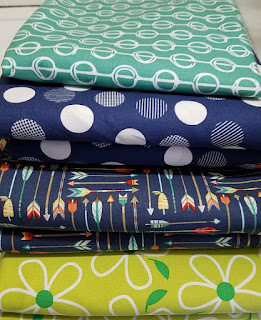 And after I got home, I realized I need a back for the second baby quilt.  So I went back a day later and bought that.  I'll share more about that as I get to it.

Before I left, though, I was checking out my stash for a back for the first baby quilt.  I had a lot of fabrics pulled out and was trying to figure out how to cut and resew them to make it look good.  And then I went for one last look in the stash and found it.  IT. 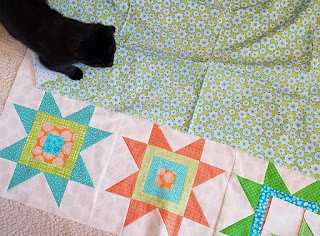 Freddie was having a friendly day that day, so he was helping me make sure it was big enough without having to sew anything.  Since the quilt ended up being only 39" across, and I had about two yards of this, it was perfect! 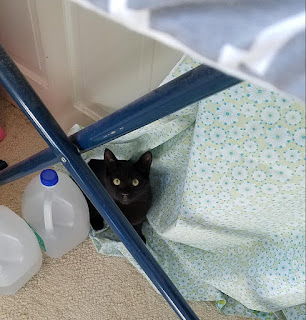 Freddie also helps press large pieces of fabric.  This month has been particularly fun because I have bought a fair number of pieces that are a yard or larger, washed and ironed them.  He likes to attack the "danger noodle" that makes the iron work through the fabric from behind the ironing board.  Don't let that innocent look fool you.  He's a terror when he wants to be.

So that went on the longarm about a week ago... 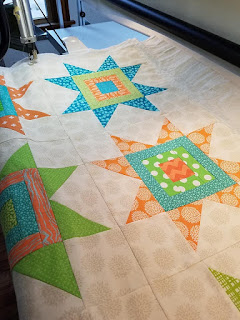 There are no more photos because this was about the time all heck broke loose.  The tension wasn't quite right.  And even with a full bobbin, it was loud.  So I swapped out bobbins, thinking that might be the issue.  Nope.  Adjusted the tension a bit, but since I almost always use the same kind of thread, my tension shouldn't be a big issue.  But it was also loud, which tells me there was more wrong.  So I took the faceplate off and found a bunch of gunk kinda glued in there with oil that had splashed around when I was oiling it.  Cleaned that up and it was louder!  So I re-oiled it (where its supposed to go, not where it splashed!) and in the process managed to crush the plastic tube the oil is held in.  Thankfully it did not get the quilt or my clothes, but the floor, table behind the longarm and a part of the leader got it.  And now I have no oiler.

After all that, it ran well and I finished the quilting quickly.  I just did overall swirls.  And then I went right upstairs and sewed on the binding.  And came back down and hand-sewed the other side down.  It still needs a label, but it's done otherwise.

The weather has been all over the place, so I haven't gotten a photo yet.  (Seems whenever I remember it's windy or snowing or I'm at work...)

So back to the challenge quilt.

I have 11 fabrics.  If I cut 4 of each piece from each fabric, I'll have enough for 44 blocks, but will have to mix and match.  That won't make a nice regular rectangle quilt, but I can take two out for a 6x7 layout, or make a few extra when I'm done.  I'll wing it.

But this pattern has curves and though a plastic template was available, I would have also needed to purchase a smaller rotary cutter to make it work.

Nope, not gonna invest that much on stuff I'll use once or very little.  I can do this with templates.

Carefully trace onto freezer paper and iron to one layer.  But dang, how am I going to keep these from sliding?  Will pins work? 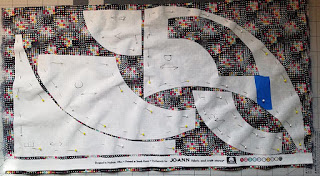 As I was pinning these down, it hit me - this is how people have made clothes for many, many years!  Cut the pattern while pinned to at least two layers of fabric.  Well duh, of course this will work!  I pinned a lot to make sure the fabric didn't shift too much, despite my friends' confidence that the pattern is very forgiving.  I'm gonna do as much as I can accurately so there's more room for fudging later! 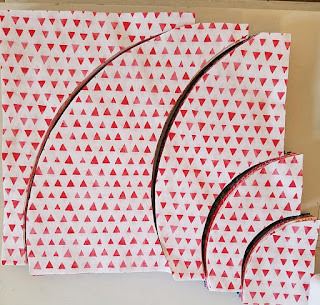 It took a good chunk of the day, with many stops to rest because my thumb was getting tingly from holding the scissors too much, but I got all 220 pieces cut last week Monday.  Those new scissors from my last post, though?  They were a godsend!

Tuesday after work I cleaned the house and prepped the design floor to lay all of these out for a mix-and-match session. 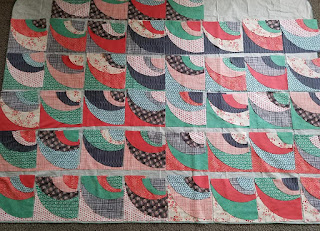 I debated about sharing what I was doing for a while.  I don't want to share too much too soon.  I don't want anyone to steal my idea and then beat me with it, but this just looked too cool to not show.  I was worried it would look bad until I saw this photo through the lens of the camera.  Though they won't all be going the same direction, I think it will all be just fine.

(And I bought a flannel-backed table cloth (seen under the blocks a little), thinking I would need it to move these around, but decided to just pin block sets together and fold the tablecloth back up - it didn't do very well at keeping things in place when Gabby tried to help...)

So Wednesday I started sewing.  I'd done this pattern before for my friend Colette when the guild did a block exchange a few years ago.  I made her 7 blocks in a variety of colors and remembered that the first few were hardest and they got easier.  The same thing happened here.  The first two I was about ready to throw in the towel.  Thankfully, I had prior experience and soldiered on.  They got easier.  Mostly. 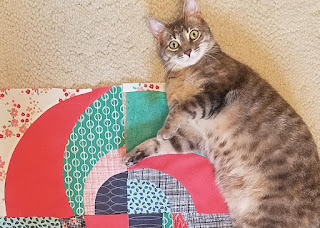 Gabby quickly claimed the first block set.  (That face...she's a goofball for sure!) 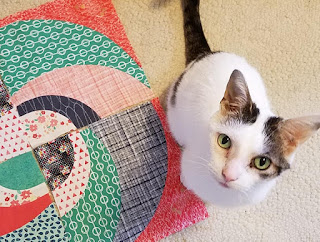 Emma isn't exactly claiming this set.  She's mad that she is not being fed RIGHT NOW.  As usual. 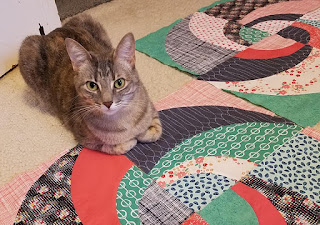 Gabby is at it again.  Being adorable as always. 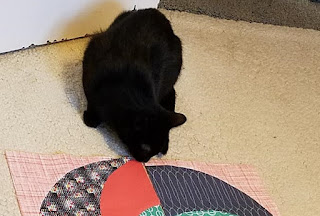 Freddie was less sure about these things I kept putting on the floor, but he's had a pretty aloof week, so the fact that he was in the sewing room was good.  (He's back to normal as of yesterday and today has tried to trip and kill me at least 40 times.) 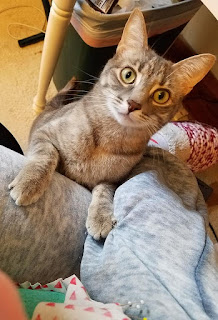 Gabby even does this when she wants extra snuggles.  She's so funny.  Half the time she's a wild beast who will not be caught or tamed.  The other half the time she wants you to pet her NOW.  When she's like this, I can pick her up, flip her upside down in my arms and snuggle her like a human baby and scratch her chin.  When she's not like this, she taunts you and then runs and hides under things because you might touch her.  As if I could catch a running cat...

I'll hold off sharing photos of the "blocks", as they will all get mixed up anyways.  And I think you can figure them out from the snippets here.

But because there probably aren't enough cat photos... 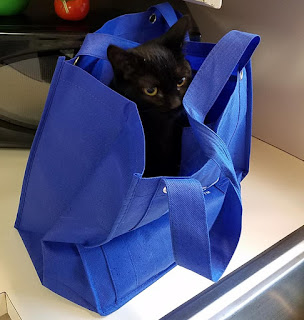 Freddie also helped me unpack the groceries again yesterday.  This cat...every time he sees one of these bags, he dives right in.  (Yes, yes, he's on my kitchen counter.  It's easier to just let him be when I'm not cooking - picking my battles...)

And now, it's off to sew more blocks.  I'm a little past halfway, but am planning to join the guild sew-in on Friday with a few friends and it would be fun if I had the blocks ready to lay out when I get there.  It's a big room with lots of space for laying out blocks, plus I'll have some experts to help with placement decisions!  (And we'll have a good lunch and lots of chatting, of course.) So I'd better get busy - I have to work two of the days between now and then, so time is limited!

PS My "smart" phone has decided it is not going to allow me to leave comments on blogs.  So if you haven't heard from me, that's why.  It shows up as "google account" but eats my comment as soon as I click "publish."  I've tried looking into it and the fixes I've found last about 1 comment.  I'm hoping the next update to the app I use for a browser will fix it...whenever that comes...
Posted by Katie at 1:56 PM

Very interesting blocks and lots of kitty help! Have to have the help! It will be fun to see how this goes together.

Well, you've been busy!! With so many cute "helpers" it's a wonder you got anything done - LOL. You're a brave woman to tackle all of those curves - your blocks look great! I'm looking forward to seeing the final layout - ;))

Ok, now that I've seen your layout, I like it ... a whole lot better than the one I saw Wendy doing ( her's is the only one I remember of the three). At sew in on Friday, you also won't have cats laying on blocks demanding attention - that could be a plus :). You ought to send some of these pics of Gabby to Gloria; I think she'd like to see them.

That is definitely an interesting pattern! I've never seen it before. Pretty cool! Freddy looks so cute in the blue bag. He could win a contest for cute cat in a bag!

I was trying to think of clever line about not letting the cat out of the bag . . . Wow - your curvy pieced quilt is a triumph. You make these conmplex blocks look so easy. Don't talk top me about phones and computers and modems. I haven't been able to leave comments for weeks. My blog has gone a bit haywire but I think I've straigthened things out there. Hopefully, this comment goes through.