When I joined in the fun for the Project Quilting challenges, I wasn't sure how much I would get done - quilt-wise - between project prompts.  It's pretty intense for some of these to get them done and I thought maybe I'd want some down time between them.  (There's a week to make, then a week to vote...)

Apparently I'm not needing the down time!

I'd been working on some of the Left-Handed Sampler Quilt 2 blocks here and there.  I was planning to make 25, but was skipping around, not making all of the set she'd chosen.  But there was a first quilt along that had 99 blocks - these 25 came from the original 99 - so I knew I could go there and pick and choose a few more. 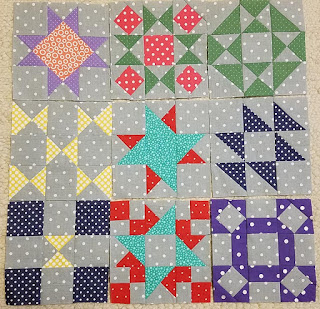 But...I made a numbered list - numbering every 5th line - to keep track of what I had made.  You see, these were all numbered and named from the first quilt along, and I wanted to make sure, since they weren't being done in order, that I didn't make the same block twice.

I was making that numbered blank list quickly while my hubby was yammering on about something.  And I forgot how to count.  So when I had made only 9 blocks Friday night, I was at #25.  I was done!

Saturday afternoon, after work, I realized my error and quickly pieced an actual 25th block.  But that was annoying.  I forgot how to count!

Since I had to work a good part of Saturday, I only got the blocks into a pleasing layout and sewn into rows before bedtime... 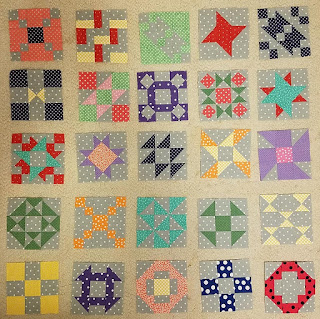 At that point, I needed to think about using cornerstones or not.  With all the colors going on, I wasn't sure what color to use, worrying that any color would take away from the blocks.  Or using multiples would result in a disaster of trying to choose a color that was different from all four blocks it touched.  So I decided I would do no cornerstones, but carefully line up rows as I went.

This afternoon (morning brought chores and a trip out for a delicious lunch with the hubby), I got to sew the rows! 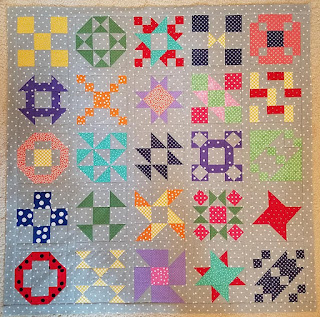 The original pattern is set on point with lots of extra setting blocks and such.  I decided a while ago that this quilt, with 1" sashings and 25 blocks, would make a great donation for Jack's Basket.  I have about 4 other quilts in various stages of unfinished-ness for them, but I hope to get them all quilted up soon and sent off.  I think the bright happy colors and lots of dots will be enjoyable for a little one.

But this block, as I was constructing it, made me giggle...

This was actually the third thing I've finished this week, but nobody said my blog had to go in order, right?

I've also been creating pinwheels with leftover lost corners from a quilt called Garden Variety (that apparently I have not blogged about the actual quilted and bound finish...).  There were a lot and I can't stand to throw that much fabric away, so I tucked them in a bag with the remaining fabrics (it was a kit), figuring I'd get to them someday.  Well, the pinwheels as leader-enders part of the project ended a while ago and I thought a totebag would be a cute way to use up a bunch of them.

So I scratched my head some, added some fabrics and used the pattern as a rough guide instead of full pattern.  Which was okay. 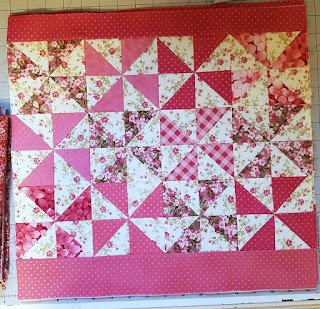 This is one side.  The other is identical.  (And I'm a little annoyed with myself for the few pinwheels that spin the wrong way - I was being so careful!)

I just quilted it with diagonals through the points that did not have 50 billion seams.  Easy peasy.  And without my walking foot  peg leg again.  That thing is a disaster.  This went so fast.

Don't know what a peg leg is?  This video will explain...

It's a bit long, but well worth the watch.  And the look on his face when he gets it...

Anyways, back to MY sewing adventures.

The bag went together fairly quickly and I even found some fusible fleece I didn't know I had that I was able to use instead of trying to spray baste batting in place. 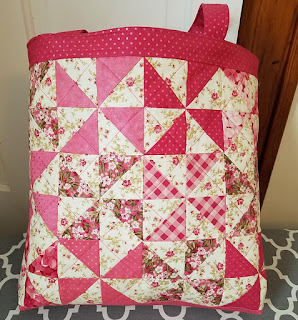 It's pretty girly, but I plan to donate it to a church bazaar that sells handmade/homemade items.  I hope someone will like it! 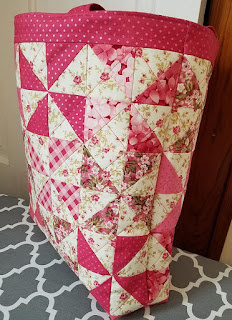 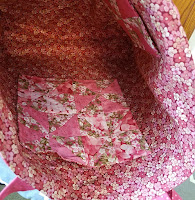 On the inside, I used more of the pinwheels to make pockets.  Truth be told, I wish I'd put them lower, as instructed, but it felt like they were going to be too low.  Ah well...they're not poking out the top, so it's all good.  (And if I don't tell anyone, they won't know it's wrong!)

But I STILL had pinwheels left over.  What?

How about a dolly quilt?

Oh, I have JUST enough for a 4x5 layout, which will be a perfect doll quilt size! 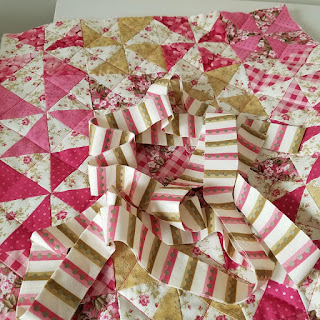 You can't see it too well here because I piled the binding on top of it.  That binding is left over from the Garden Variety quilt.  I cut far too much and had enough plus about 10" for this dolly quilt.  Perfect!

I still have to hand-sew down the binding to the dolly quilt, but that will go fast.  (I just have to convince myself to sit down long enough to do that...)

But today wraps back around to the announcement of a new Project Quilting prompt.  This one needs to be inspired by the alphabet.  So now I'll be spending a chunk of my remaining afternoon thinking about that...and probably other things...like cats...

Because this is Freddie... 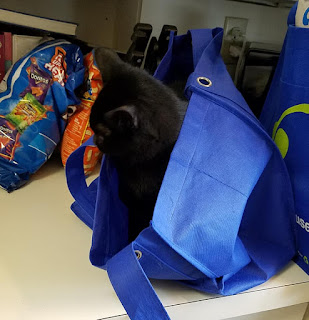 And this is Lexie... 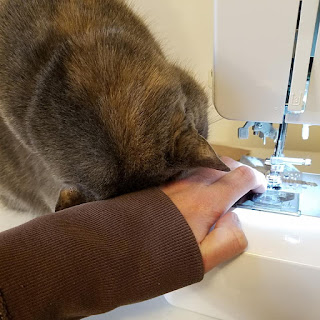 ...hungry.  She mashes her head into whatever human body part she can find when she is hungry.  Lovingly.  In the fashion of "please please please pet poor little me."  My hand/arm/elbow while I am sewing is NOT a good idea, but being deaf, she can't hear me telling her no.  (I think she knows, though...)

Off to think about the alphabet.  (Good thing it's not numbers, since I've proven I'm a failure at that earlier in this post...)

PS  My unicorn took 4th in the Viewer's Choice vote!  (Almost forgot!)  Thanks to all who voted.  I'm really excited to have done so well.  And even more excited to have a unicorn.
Posted by Katie at 4:14 PM

Congratulations on winning Prize #1 - your Unicorn is AWESOME!! Thanks for playing along - your sampler blocks make a very nice donation for Jack's Basket - with Mickey Mouse ears - LOL. Your pinwheels are cute - I had to look twice to find the ones spinning the "wrong" way. And thanks for that video - it's priceless - ;))

Hooray on getting fourth place... but, personally, I think you should have finished higher than that. Like I said last week, I really had to look to find enough to use all of my ten votes.
The new kitten ( why can't I remember it's name?!!?) reminds me of Buddy... while we're bringing groceries into the house, he has to check each bag because he KNOWS that we bought him SOMETHING and he just can't wait to see what it is lol.

W0w! You are getting lots of work done! I love your bag. That video completely cracked me up!!!

Your 25 different blocks project is very interesting. I loved the looks on the guy's face with each action; the video was hilarious! I'm sure someone will love the pink pinwheels bag, and you are right. The buyer will never see the difference in the pinwheels unless you tell her. ---"Love"

Loved the video! And loved the polka dot quilt - it will hit the spot with someone. Good use for the pinwheels. Once I made a ton of pinwheels of different sizes and then added borders to make them all the same size for putting together a donation quilt. It was really cute. Maybe I'll do that again as I have lots of random HSTs in a basket for possible future use. Doll quilts could be made as well.

I hate to complain, but I had to do about 20 puzzles to prove I wasn't a robot! What is that about???

Darn, drat! It’s s almost a full time job keeping up with your entertaining posts. That video had me in fits of laughter but I cheered for him at the end. Great idea to use those left over corners. I don’t like throwing out those off cuts either if they are of quantity. Your kitty-kats are just delightful.