After I sewed the first eight blocks from the Left-Handed Quilt Along, I went to bed, feeling caught up.  Planning my next adventure to work on between new blocks being posted.

I woke up and found out there was ANOTHER block posted.  Well, technically two, but again, they were really close, so I opted to make just one. 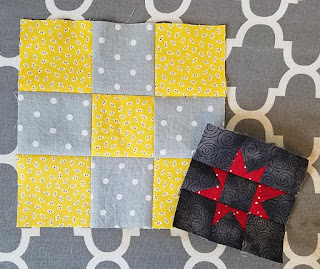 Just a simple 9-patch, but in keeping with the 9-patch layout/theme, this one should definitely be in there.  So it only took a short bit to make it.  And I made a tiny star as leader-ender, too!

And then the lost corner half-square triangles from the heart quilt were hollering pretty loud at me.  So I had decided to make them into log cabins.  Raid my stash of strings and use what I could from there of red and pink.  Use the remaining white.  Supplement where necessary from the stash. 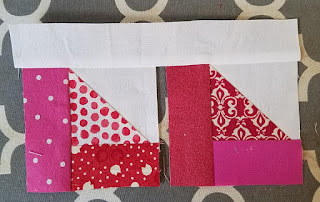 Off to a fun start!  My strings turned out to be a bit disappointing.  Many were too skinny (I'd decided for the sake of my desire for order, they needed to all be the same size).  So I cut from the stash earlier than anticipated.  But it's okay.  That is helping reduce those piles a little bit more.  The heart quilt didn't seem to make much of a dent, and this one probably won't do much either, but I know it's progress!

After I had the first four (I'm working in batches of four), I put them on the floor to see... 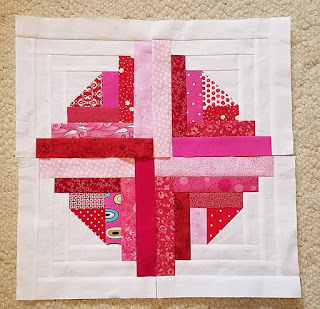 The final quilt will be a 5x5 layout (because I have 50 half square triangles, so I'm going to use half - one of each set - to do this quilt) and finish 36x36".  So this layout will not be the final one, as it needs an even number of blocks. 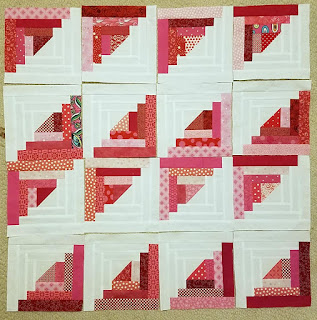 Last night at bedtime, I had 16 made.  I'm not sure this will be the final layout, and again sewing in batches of four, they just get set on the floor that way.  Eventually I will have to play with the layout and decide what I want to do.  Something that is pleasing to the eye might be a bit more of a chore than an even number would be, but making an additional 11 blocks is not really something I want to do.  (And I have an idea for the remaining 25 pieces...)

Monday, as I was doing morning chores, I decided I needed an apple cake.  I don't know why.  It just sounded good.  So I made an apple cake. 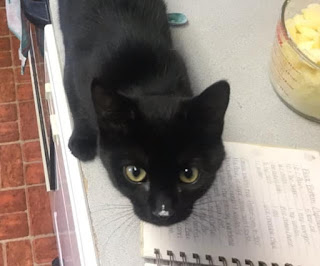 Freddie thinks he should be on the kitchen counters all the time.  You put him down, he jumps back up.  If I'm cooking, I'll wash my hands before I go back to that.  Before I even get the tap turned on, he's back on the counter.  So I've learned, much like I did with Emma-No, that sometimes it's just easier to let them be...work around and with them and do your best to keep the cat hair (extra fiber!) out of what you're making.  (But let's be honest here...cat hair is probably a staple in my diet!)

He was investigating the flour in the bowl and, well, he WAS an all-black cat!  He was not nearly as interested in the cup of sliced apples you see there to the right.  (Perhaps he'd already checked those out as they sat in their sugar bath for an hour while I took a shower?) 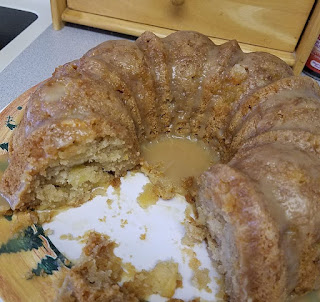 And here's the (slightly used) final cake.  Not the prettiest thing you'll ever see, but it has sliced fresh apples in there, making it really moist.  And a caramel glaze that goes over top for an extra bit of sweetness.  If it wasn't almost lunchtime (and the hubby bringing me Jimmy John's - the best subs on the planet), I might go have a slice!  Dessert?!

Soon it's off to the longarm.  The hubby has the whole day off (dentist appointment, so he figured why not?), so I've got to do something to make it look like I don't just sit around and snuggle cats all day, right?  HA!

Your yellow/gray 9-patch looks really good with that gray/white fabric behind it. It will be fun seeing how that all turns out. I do love your little red star in your leaders/enders. It will be fun also to see how your little red hearts and log cabin blocks end up. I do like that layout for the log cabins. Wish I had a big slice of that apple cake, and make it right now! ---"Love"

What a pretty 9-patch! I hadn't seen log cabins around HSTs before. That's cool! And your cake looks really delicious. I would like to try making it - is it a recipe you can share?

All your quilt blocks look great! I really like the HST log cabins. I don't think I've ever made a quilt with a lot of white in it. Of course, with CW repros beige goes better. Freddie is too cute. I don't think I ever told you that in the past we had a couple of black cats - at different times. In fact, we have had 6 cats in the past and 2 grand cats that we took care of when our DS/DIL were deployed. Now we are old fogies and are done with pets. Hee Hee!