another opportunity to vote!

The voting is open for the second Project Quilting challenge.

Remember I made this little pencil pouch for the Red, White and Blue theme? 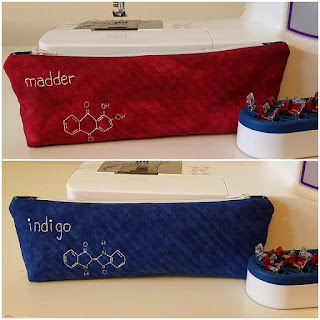 You can vote HERE!

You get 10 votes, so if you want to use one for my project, that would be awesome.  But there are a lot of really amazing ones there - I had a hard time deciding how to use my votes!  Voting is open until Friday or so...take your time!  There are some really interesting, wonderful stories behind some of the projects as well, so it's fun to click through the thumbnail links and see what inspired folks to do what they did.

Once I had my project done and uploaded/entered, I dug back into finishing the graduation quilt top.  It is a top, but the weather has been snowy, cold and windy here, so I don't have a photo of the finish.  I promise soon...but we're supposed to get almost a foot of snow here today, combined with some gusty winds and then it will be super cold for a few more days.  It looks like Saturday we'll be back solidly into double-digit temperatures, but not above freezing!  (But after the high of -2°F predicted for Wednesday, that will feel like a heat wave!)

I'm feeling a finish-it mojo, so I finally cut the cornerstones and sashing strips for my Vintage Christmas quilt.  I've been staring at the box of finished blocks and fabrics with no good reason for not cutting them and I finally just did it.  And yesterday, despite my hubby being home, I took over part of the living room floor to get the blocks all distributed...ummm...evenly? 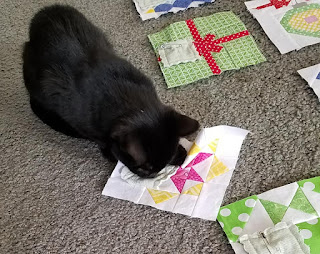 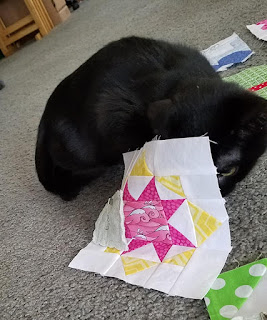 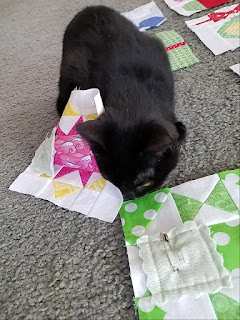 Obviously, I had some help!  You have to move fast in this house if you're going to get this sort of thing done... 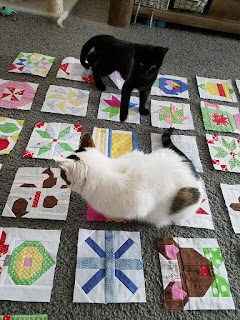 Emma joined Freddie, but her method was more sit-and-wait, as opposed to his help-it-along tactic.  Neither was very helpful, but I think they do enjoy it when I sit on the floor.  I can easily scratch their chins from that position.

But I did get it all done and rows labelled... 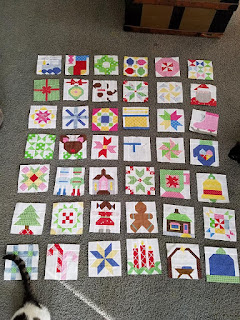 ...and now I'm in the process of sewing rows together.

It's a good thing I had this photo, though, because yesterday I had some extra blocks sewn to one of the rows and not enough in another!

I opted to wait on positioning cornerstones to when I have the rows sewn together.  Originally I had planned to do that all at once, but with all the help I was getting, I decided I needed to pick it up and go back later.  I'm hoping later this afternoon it will happen - I'd like to have this together as a top today.  And with the hubby returning to second shift today (promotion = new shift), I won't have to stop and make a nice dinner for him, I can just eat leftovers quickly!

Once this is done, I'm going to move on to the green X blocks I made at retreat.  And then I have one more project that will need some math to get blocks into a top, but I am letting the ideas simmer a bit for setting and whatnot until it's time.

I'm not sure I like my hubby being back on second (he's done all the shifts, a few years here and a few years there), but this promotion is a big deal and a job he's excited about because he sees how much of an impact it can make on the facility he's in.  And I know eventually he'll work his way back to first shift, it's just a matter of time.  So in the meantime, I'm going to make some lemonade and sew away my evenings, watch whatever I want on television (what shows are even on any more?!) and enjoy not having a starving hubby waiting for me to make dinner every night.

Thank you for this illustration of what the cat on my Tic Tac Meow quilt should have done! Good luck in the Project Quilting voting. Your pouches are great. Enjoy your lemonade evenings. I hope hubby gets back to first shift sooner than later.

Congratulations to your hubby for the promotion!! You have such cute "helpers" - ;))

Not sure what else will be there; I will have to check it out further, but I'm pretty sure none will be more well made than your pretty pencil holders! Of course, I'll be voting for yours! Hope you win! ---"Love"

I voted! Too bad I can't give you all 10 votes. There are some cute things being made for the challenge. Hope you win! Your kitties are such cute helpers. The Christmas quilt is going to be so cute. Glad hubby got the promotion and hope he can return to day shift soon. At least you get lots of sewing time in the evening. Can't wait to see progress on the Christmas quilt!

Your pencil pouches are wonderful! Your helpers seem very dedicated to giving you assistance. It's good you were able to get those beautiful blocks arranged. They will make a fabulous quilt!

Your helpers almost make me wish I had some - helpers, that is! That quilt looks so cute! Enjoy your evenings for a while. I understand your feelings - my DH is always home, so I never get a break from fixing supper. He is very good about watching TV shows that I enjoy and he records the ones I don't enjoy and watches them at a later time, like during the day when I'm locked in my sewing room. Today I'm going to a quilt show in Albany, OR with my quilt buddy - yea!

I don’t get the voting heart on my iPad so I’ll vote from the PC. The red, white & blue theme has brought out lots of wonderful projects. How sweet to have your kitty helpers. It’s going to be such a lovely quilt.