In my last post, I shared the acquisition of my new book and fabric... 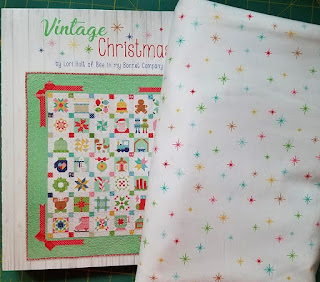 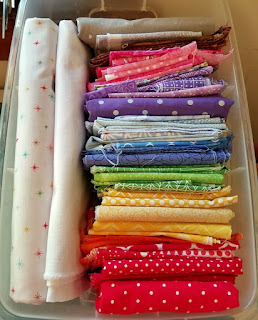 ...and then it was finally time to start sewing!

With five blocks per week being the "assignment" for the quilt-along, it's easy to get behind quickly.  And getting the book 5 days "late," I was already at a disadvantage.  But I've been working on them and only have a couple left to be totally caught up! 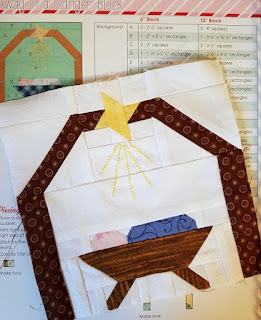 I'm making the 6" blocks.  All 42 of them for the sampler quilt on the cover of the book.  I'm not using a green background for some of them, as indicated in the book, so sometimes that is making color choices change.  Like here - baby Jesus has a blue blanket in my version, as the white one in the book wouldn't show up!

But for scale...some of the pieces... 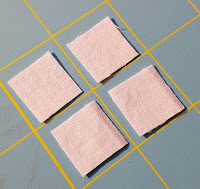 And if those weren't small enough... 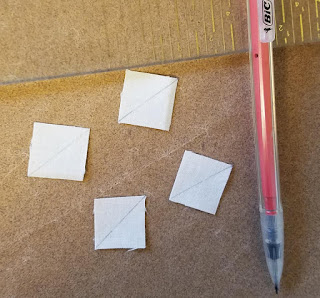 ...yes, I have to do the stitch-and-flip lost corner with them.

But I'm being very careful and trimming each unit as its sewn to help keep things lining up correctly and keep my points pointy.  (So far, so good, as you'll see.)

With that one done, I pressed on to block 2: 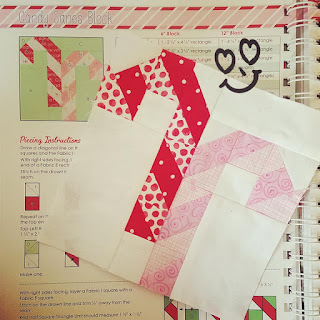 ...and again some creative fabric choices to keep the stripes standing out from the background.  Both of these blocks required a few additions to be made to my original fabric pull, but I think I'm doing okay.  I haven't changed it too much! 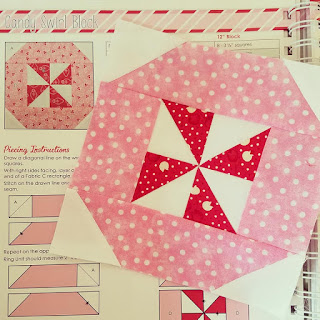 This one went very fast compared to the first two.  And look at my points!!!

Next up, encouraged with my awesome points, block 4: 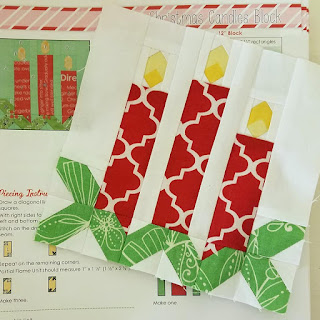 This one, too, had a LOT of pieces and there are buttons needed to mimic holly berries, but even if I had them, I would wait to sew them on until after quilting.  But I had fun cutting the chevron print for the flames - they came out perfectly to look like the inner cone of a flame!  (That wasn't entirely on purpose.) 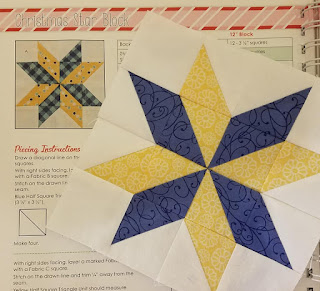 This star doesn't look very Christmassey to me, but if I want to balance out the other colors needed in some blocks, this one seems like a good place to start.  Though being a Michigan State grad (green and white), it was very hard to put those colors together, as they are our arch nemesis (University of Michigan) colors!  But I do know they are wonderful colors to put together and play so nicely.  So it's okay. 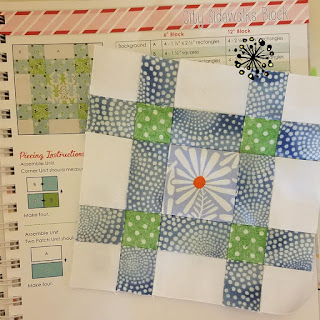 This was another quick one and I had fun with the fussy cut center.  Again, not super Christmassey colors, but it's a pretty block! 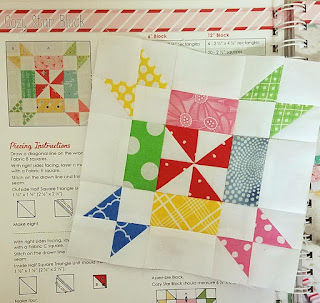 This one also had some tiny bits (though not as bad as that first block), but with trimming and careful sewing, I nailed the points!  I'm hoping to keep this up throughout the quilt, but we'll see!

And last so far is block 8, with a whopping 50 pieces.  And some of them as small as the first block. Holy cow she's cute!  I had a little trouble with one of those ankles being a little fat (a cankle, if you will), but a little wider seam took care of it well enough for me to be happy.  Though looking back, I wonder if maybe her shoes should have been blue to match her hair ties or green to match her belt?  Ah well, I'm not changing it now!

The book has an "x" embroidered for her eyes.  I did NOT like that - isn't that what they do when something is dead?  So I thought on it last night and decided she'd be sleeping and have eyelashes! 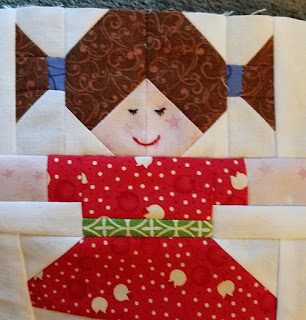 It does look a bit like she had some trouble with her mascara, but if you consider the lines for her eyes are less than 1/4" long, I think it's pretty good.  And when it's all done in the quilt, your eyes won't be drawn to it like here when it's front and center.

So that leaves me two blocks to get caught up for this week.  I can do that.  The next one is a Christmas tree, which looks fairly simple.  I'm not sure what the last is, but I'm kinda hoping to get both done today.  I have a list of other goals for the month, including my UFO project, but I have 3 days in a row off (including today), so that's promising!

I've started a box of bits, as sometimes these blocks require tiny pieces that normally you'd throw in the trash.  Like strips that are less than an inch wide.  But it's served me well, as the hair ties on the dolly as well as a few other parts used up some bits already!  They live in this box for now... 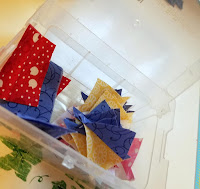 I'm also sewing and saving any "lost corner" triangles from squares that started out 2" or larger.  I'll probably make some little pincushions out of them now that I've bought a huge bag of "lizard litter" (aka crushed walnut shells).  Perhaps even in time for Christmas?  HA HA HA HA HA!

Little Gabby went to the vet today for a follow-up to her tail amputation.  As expected, she's doing just fine.  But that official word from the vet was needed.  She is now the Angriest Cat in the World and hiding from me FOR.EVER.  Of course, I had to upend a sofa and bed in my bedroom to eliminate enough hiding spaces before I could catch her.  And then suffered some nice gashes on my hand (I put on a heavy sweatshirt prior to trying to catch her, knowing it was a good safety measure, but my hands were exposed!) before I did finally get her into the carrier.  So now we just have the period while she decides I'm not the evillest thing ever and will come back out.  In the meantime, I'm going to go about my business (I'll hold off with the vacuum until tomorrow at least - she hates that!) and let her be.  She'll come around.  It will just take time.  Patience.

So that's it for me.  Not as much sewing as I might like, but these blocks are taking a while (well, some more than others - as expected) and I'm taking my time with them.  If I get behind on the quilt-along, it's okay.  The goal is to finish and I will.  No excuses!

Glad to see you've been busy... those blocks are coming out nice (well, except that dreadful colored star block - green and white would have been a good alternative since they are Christmas colors and not yuckky UofM colors.) I'm glad I'm not doing these; I'll just enjoy watching what you do. :)
Gabby sounds like Chewy when it comes to getting into carriers and going to the vet. He absolutely does not like it. We finally broke down and bought a plastic carrier with a clear(ish) lid after he tore up two of the cardboard ones that the vet's office sells you.

You are doing a great job on those blocks with all those tiny pieces. Reminds me of those Moda Block Heads blocks I did some time back. I'm just glad it's you making them now and not me! You do know, I'm sure, that cats are their own bosses! Sorry you got your hand hurt while trying to be boss!
---"Love"

The blocks are so cute and perfect! Nice going with all the points, etc. As to your cat, I have had several cats, but my sister is a certified cat lady and she got bit by one of her cats when holding it down for the vet (or trying to hold it down) and it did get infected and was very sore for a while. So maybe you need to get some special gloves for moments like that. I don't know if they make special gloves for that purpose, but if not, there should be. Ha Ha!

Pointy Points!!! Yay!!! - You're making great progress on those blocks even with the itty bitty pieces - and they live in their own little box - how cute! Sorry about your hands - but glad to hear that Gabby is doing fine. Will she come around when she gets hungry?? - ;))

This is going to be an adorable quilt!!! All of your blocks look so cute, my favorite is #8, the dolly. I used blocks from Lori's Farm Girl book for a wall hanging for my oldest daughter and those had some tiny pieces, too. Lori's instructions are so well written it was really fun sewing them. Have fun with this quilt, it will be so cute!

Kitty wrangling sounds dangerous, glad your cat is calming down and feeling better.

I don't think these blocks qualify you for a "not much sewing" badge! It takes time to sew all those small seams! Your blocks are super fun. IT will be worth the time and care you are putting into them.