While I made great progress on my "seeds" last week, I knew the time I had to camp out in front of the television and hand stitch was coming to an end.  The hubby had a long (4-day) weekend this weekend, so I knew it was either watch what he liked or sew elsewhere.

I hadn't touched these in a while, but with the oranges from last months UFO released, I had cut a few more pieces and it just made sense to keep on sewing!

I'm not sure how much of my organization process I've shared, so I'll share it (maybe again!)...

When I cut fabrics, I place a set of 8 matching squares into a tiny zipper bag (the kind intended for jewelry sellers).  This keeps them all together until I'm ready to sew that block. 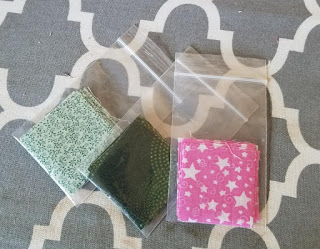 Then, I happened to have these little tubs in my sewing room - purchased a long time ago at a dollar store on a whim - that fit perfectly!  So my setup when sewing looks like this: 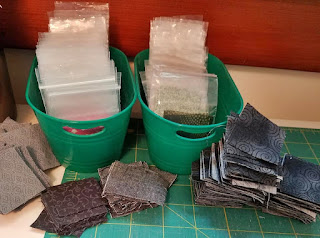 A little messy, but you can see I have plenty of sets of squares to go (though the full set of 100 bags is no longer full, but was when I started this weekend)!  But this quilt is going to take 900+ tiny stars, so I'm going to be raiding stashes of friends and family before long - I think this represents the end of mine!  (I'm also going to have to purchase more background - that grey/black on the far right is my preferred fabric and what I started with - from my stash - I bought a 3-yard chunk at Hobby Lobby earlier this year when the stash chunk ran out and what you see there is the last of that.  The other fabrics are just stash leftovers and I'm mixing them in for interest.)

I didn't sew as many hours as I thought I might at the start of the weekend, but I got a lot done! 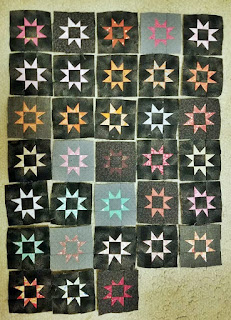 33 in this first round.  The colors are a little bleak here, as the photo was taken later in the day when lighting isn't great.  But 33 is awesome!

And then, as a bonus on Sunday, when I didn't expect time to sew, I got a few more done! 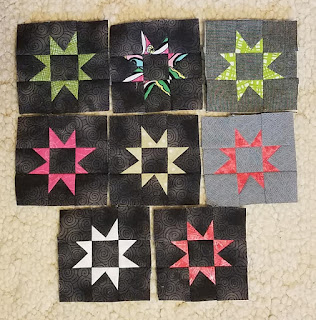 Eight more!  For a total of 41 new tiny stars.  (And the colors are much better here!)

I'm not sure of my total count, but I might be hovering around 400 right now.

I have 400 different fabrics?

Well, probably not.  Some of these were the tail ends of fabrics.  A few were scavenged from a bin of scraps at a quilt retreat.  And I know some have been used up since this project started.

But still.  That seems like a lot of fabrics.

But please don't put me at the top of your list of hoarders.  Really.  Almost all of the fabrics I have are left over from other projects.  And many are small pieces.  Like I couldn't cut another round of eight 1.5" squares to make another block small pieces.

And I've been working hard to use my stash.  Doing fairly well, too, thankyouverymuch.

So I'm back on the bandwagon to work on the ongoing projects again.  (We'll see how long it lasts, but if it stops being fun, who wants to do THAT?!)

I'd be back at it again today, but I have to work this afternoon, so I'm just trying to get a few odds and ends in, rather than starting in on something I know I'll have to quit before I'd like.

Yesterday, after work (yep, newbie gets holiday duty!), the hubby and I canned a bushel of tomatoes.  It turned out to be 21 quarts (perfect for my 7-jar canner!), but was fewer than we anticipated.  I think, when the timing is right, we'll probably do a second round.  It was hotter than blazes in my kitchen (the hubby even wore a headband sweatband!) and we made a good mess, but I know when it's below zero outside with a nasty wind whipping around the house, we'll be so happy to curl up with a hot bowl of chili, made with fresh, home-canned tomatoes!

PS I forgot to mention - the big show was kind of a disappointment last weekend.  Many of the quilts are quilted to the point I'd call it embroidery.  I can appreciate the workmanship and time involved in these quilts, but I just don't care for the look.  And the vendors were so much the same as previous years that I found nothing new and exciting to purchase.  Not. One. Thing.  But it's okay.  I don't have to buy things and I had a lot of fun with my sister-in-law.  And after, we went back and I hung out with her and one of my brothers for a while.  We were actually trying to talk the other brother into meeting us for dinner, as he'd smashed and broken a finger at work a few days prior.  Mom and dad are on vacation, far east of us, and mom wanted us to check in on him...plus, we have fun together.  Unfortunately, being a weekend (non-work) day, that meant he had stuff planned with his kids and wife, so it's okay.  If he was doing that, we're pretty sure he's okay!
Posted by Katie at 9:48 AM

It sounds like I didn't miss a whole lot by not going to the show in GR this year. Well, maybe next year will be better.
I'll keep you and your tiny stars in mind while I'm cleaning out my sewing room. :)

Thanks for a great organization idea! I need to try that. Your little stars are really shining brightly! Very cute! You are one busy lady all the time, aren't you? (I'm getting lazy!) ---"Love"

Beautiful stars, 400 it's a lot! Love the story telling why you made them instead your other current projects ;))