On the 1st, I found out early that the Rainbow Scrap Challenge color of the month is blue.  I was kinda hoping to hear early what the UFO number was so I could choose what to do on my last day off, but let's be honest...I was really looking for a reason to procrastinate starting Patchwork City!  It intimidates me a little - templates? 75 blocks?  Ugh!

So Monday last week, I made two blocks. 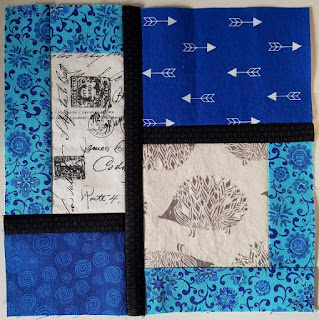 This one went together fairly easily.  Choosing the fabrics was probably the hardest part.
But hedgehog!

Then there was Block #2: roadblock 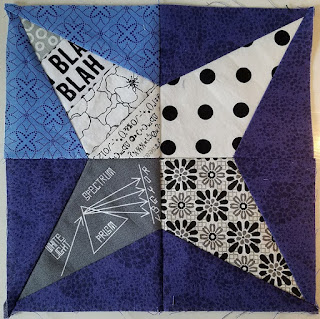 Holy Moses!  Templates - a rather new thing for me. Bias pieces - not exactly my strong suit. Matching angled points - gaaaaaaahhhhh!  So this one was a LOT harder than the first.  But it doesn't look too bad.
And science!

But that ended my holiday sewing.

During the week I worked on binding "Nope" -  it's done now, but hand-sewing has come to a standstill due to a crack in my thumb...ah the joys of being a lab tech in the winter!

I did find out the UFO number for the month and it's just (ha ha ha ha) a single block for Arcadia Avenue.  With about 65 pieces in each block, it will take a while.  Plus paper piecing.  But that's probably a good project for my guild's Saturday sew-in.  So a little more procrastination there.

So this morning...well...afternoon...after thawing cold water pipes to the washing machine (did I mention it's been in the single digits here for HIGH temps the last few weeks? we rejoiced at a high of 18 the other day...that's Fahrenheit, folks!), the kitchen sink (multi-use hair dryer to the rescue!) and finally getting those chores needing water going/done as well as a few others, I could start sewing. 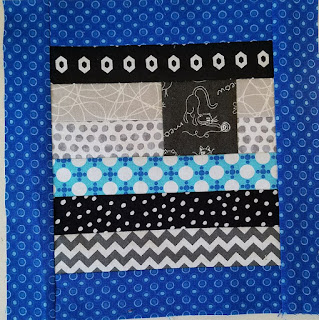 (I wish now, I'd fussy cut the cat with his paw in the fish tank from that cat fabric - seems much more fitting for a block with this name.) 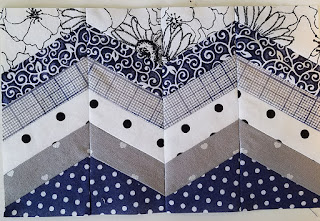 (with something of a fail at trying to fussy cut strips...) 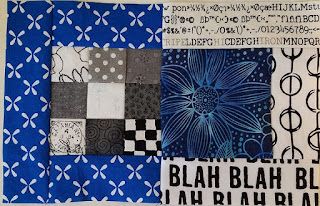 And finally, because I talked myself into doing just one more, #6: fortune cookies 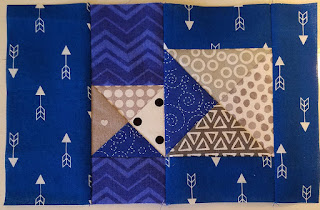 Another with templates (those quarter-square triangles are template-cut and not as hard as the previous block with templates, but silly Katie realized there were corner points to match AFTER sewing a bunch of pieces together...they're close enough - I'm not gonna rip), and probably a good place to stop.

I have three more "assigned" for blue this month and they're the largest of the blocks and look a bit more involved, but it's only weekend #1, so I've got plenty of time to procrastinate.

I've also been sewing tiny wonky stars as leader/ender blocks while making Patchwork City blocks.  No photos, but I've got probably 200 of those (and failed to mention them in my 2017 roundup).  It's slow-going there, too, but going and that's the important part.

Time to go fold the last load of laundry and see if the hubby wants me to make him some dinner...

You got a lot of blocks done! Hope it warms up soon.

Combining an involved pattern is a GREAT way to work through the Rainbow Scrap Challenge!! Happy sewing!

What a fantastic start to Patchwork City - it's going to be an amazing quilt! 200 Wonky Stars - you are rocking and rolling with those. We had 47.3C yesterday (117.4F). Wanna go halves?

Love your blue and your blocks - way to go, Katie!! I won't tell you the temps here in California because I would hate to make a grown woman cry - but we have rain forecast for tomorrow - and after the huge "Thomas Fire" we're probably looking at mudslides along with the rain. Great time to stay inside and SEW - ;))

The blocks are great! I looked up the quilt pattern because I didn't remember if you had posted a photo of it or not. Looks like fun. I noticed that the Blah Blah fabric is right above the "science" fabric. Interesting! Is the designer from Portland OR? I'm thinking I saw her at a quilt show, but if she's not from Portland, it was someone else. (Someone who designs modern quilts - which are not my style, but I like them anyway). I just got back from our trip to Kansas and Florida and need to get busy with a year end overview and goals for this year. We drove over 7,000 miles - DH wanted to drive! I'll try to get a post up soon.