i was on track for a half a day!

Friday, after providing you with a fairly sarcastic post, I headed to my sewing room.  I still had a few hours to spare before the hubby returned home, so I could listen to music OUT LOUD (the kind that I like) and talk to myself with no help from the peanut gallery.

I started unsewing the pink leftovers seen at the end of my last post: 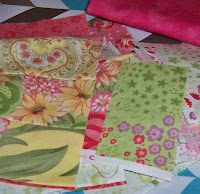 ...and started sewing them together again - in the other direction.  Turns out I had a few extra yellow strips that had gotten into my actual stash, which helped this along, as they were about 10" and most of these are more like 4". 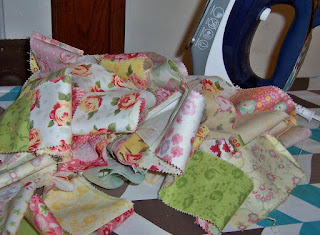 By the time I'd sewn them all together, I had a small mountain.  I wondered if this was going to make another throw-sized quilt?  It seemed like a LOT, but I kept going.  Remember I have the extra pink I purchased in case things go awry.

I was really looking forward to the seams getting longer, though, by this time.  I know I whine and moan about sewing the long seams to put quilts together, but after about 4,000 2.5" seams, I was ready for a change. 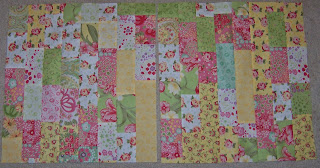 I got to a point where the strip set was about 17" wide and realized if I just cut it in half, I'd have two nearly-square dolly quilt tops!  And 16x17" is a pretty darn good size.  I've decided that these will be quilted on the longarm while I have the larger quilt loaded - there should be a fair amount of extra backing so why not!

I also made another tiny pincushion... 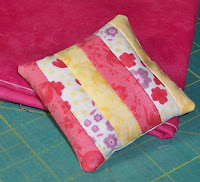 ...and sewed together most of the green and yellow leftover pieces to make binding for the true-square dolly quilt.

And with these projects finally coming to a close, this is what I have left: 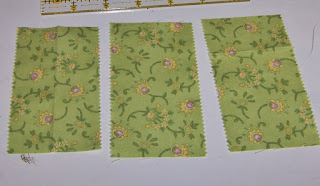 Yep, three pieces of green.  I feel pretty good about this small amount going back into my stash.

But wait, the rainbow scrap challenge color of the month is GREEN...maybe they won't go back in the stash after all?

Before bed, I pulled my entire stash of greens... 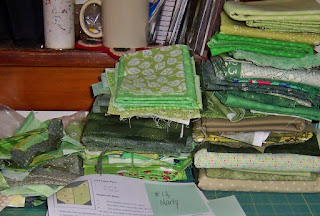 (pardon the lint roller and assorted junk on that window ledge/shelf behind there...)

What an assortment of shades.  Previous months, the colors have been a little more limited.  I worried in March that I didn't have enough contrast in my reds.  My selection of purples was fairly limited and none were super dark.  I've got the whole range here - everything from pale, pale green to nearly black.  But green is a good color.  It can go in baby quilts, grown-up quilts, flower quilts...it's so versatile, yet this is exactly what made this set of cats hard.

It's time for bed anyways, so maybe sleeping in it will help?

Saturday morning dawned and I woke up excited to sew.  The hubby was at work and I knew I had at least until 10am with a quiet (turned noisy by the radio again) house.  Emma made sure I was up early, though not early enough for her.

First up - get that dolly quilt of true squares quilted.  Done.  Machine sew on binding.  Done.

Shower.  Just in case the hubby comes home sooner than expected.  (He doesn't really care, but gives me a hard time if I'm still in my pajamas too late into the day!)

Still having trouble pondering those cats.  I don't remember any other month giving me this much trouble. 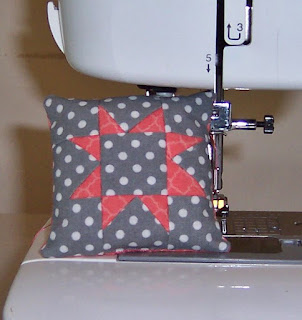 Seriously, though, this is the first of these that I have truly made in procrastination of another project.  (And sadly, I'm procrastinating a project I'm excited about...what the heck?)

And then there's those two pink quilt backs I bought that aren't going to sew themselves together, right?  So let's sew those together.  Another task I dislike, but, well, when procrastinating, any project will do...

About this time, the hubby returned home.  Just about on time for his original prediction, but I know how his job goes...he's usually hours later than anticipated for these special weekend projects, but thankfully, this time everything went smoothly and he came home on time.

He took me to lunch.  At a place just a few doors down from a JoAnn Fabrics store.  After lunch, sitting in the car while he screws around with whatever it is he does before driving (he takes forever to get going in the car...it's not the seatbelt, mirrors, and starting the car...it's the sunglasses and getting crap out of his pockets and I don't know what all...I'm in the car and moving in about four seconds!) we have this conversation:

What I didn't tell him is that I've been wanting to make this quilt for a while now.  It's the sheep from my Farm Girl quilt.  The pattern for the setting is in the book, as are the corner stone blocks.  The actual quilt in the book using the setting is very different, but it's all there.  But I knew I had other projects I should be working on, so I was trying to be good. 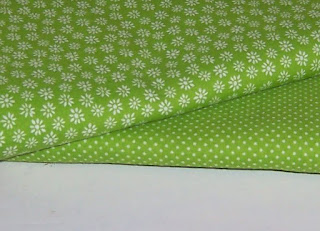 The floral is for the sashing (it's a gingham-like print in the original, but I couldn't find any and thought this read, from a bit of a distance, similarly).  The green dot is for background.  Sadly, I don't much care for pin-dot dots.  I know, I have a dot problem, but this particular version just doesn't appeal to me.  But I wanted a matchy green and this was the only one that read solid enough to be a background the way I wanted it to be AND matched.  So I'll survive.

This fabric went into the washing machine before I even had my coat off upon returning home!

While it was washing, I dug into the greens to make cats.  I needed to just get started and hoped that would get me over my troubles.  I did sort the greens into a pile that I wasn't likely to use (too dark), so that helped some.

But just dig in, right? 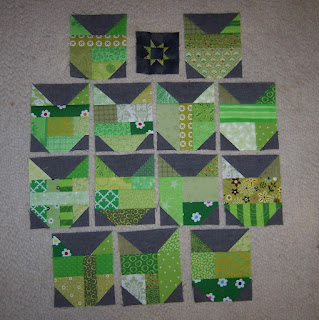 See what I mean about the variety?  But I think I managed to get enough variety in there that no one color is really sticking out too much.

But what's that in there with the cats?

At this point, I'm having fun (though there is a strong urge to dig through the recycle-scrap bags and cut as many 1.5" squares from those before I really recycle them (into paper maybe?...wherever the recycle place sends them) and I'm fighting it) and wondering if maybe these could become a block-a-day project that will become a quilt.

Last night, laying in bed before I passed out from exhaustion, I did a little math.  A queen-size quilt is about 90" square.  These blocks finish 3".  So that means about 30x30.

Maybe a throw quilt will be better.

You know, one that will be done before the next millennium gets here.

So by now the hubby wants dinner.  He doesn't want leftover chili.  He rolls his eyes when I suggest chips and cheese (it started out as a serious suggestion on a night we weren't particularly hungry, but knew we should at least eat something better for us than half a bag of mini Snickers and now it's just a thing).  So we ran to McDonald's.  Healthy, right?

And then it was time for SHEEP!

I know, I could have been figuring out borders for my UFO quilt.  Because that's technically an assignment this month, but it's only the 6th, right?

I DID clean up my greens and put them back.  Mostly because they were taking up half my cutting mat and to do much of anything (other than teeny blocks), I'd need that space.

So I pulled greys for the sheep.  The original has them in cute florals (another type of fabric I never thought I'd find myself wanting...), but I thought maybe my greys would work.  I have a variety of shades and thought some light with dark faces and some dark with light faces might be cute.

I cut a few sheep parts and then stopped myself.  I want to be sure I LIKE the grey before committing so much fabric to it. 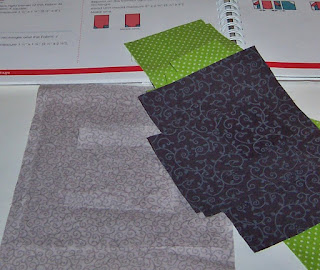 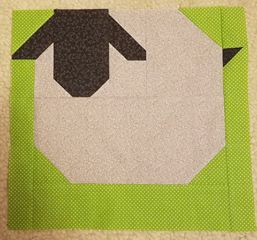 He'll get some little spindly legs embroidered and needs a strip of "grass" under his feet, but for now, it serves the purpose of trying it out.

I do like it, but I also know what the original looks like and worry that those cute florals are what truly drew me to the quilt and I'm going to hate this quilt because I know what else it could have been.

So I'll sleep on it.  Share it with quilty friends for opinions and see what happens.

(And this guy saw a fair amount of reverse sewing, as it was getting late and I clearly wasn't paying enough attention to what I was doing.)

So what do you think?  (You'll have to click the link above to see the original, as I don't have permission to copy it here.)

Today I haven't gone back to the sewing room.  We have a birthday party for a niece later today and I've been busy making her a Wonder Woman cake (photos to come later, as it will require some assembly at the party) and getting groceries to feed the hubby this week.

I'm hoping after the party I can find some time to sew, but we'll see.  Rumor has it the birthday girl is getting a tablet and since we have unlimited internet at our house, guess who gets to host the after party?  (She's 5.  What did you all have when you turned 5?  I'm sure I had NOTHING as fancy as a tablet at 5.  Honestly, I don't remember having anything that fancy until I bought a laptop computer in college - a used laptop, with my own money - but this tablet is likely far more sophisticated than that laptop I purchased in 1994!)

In the meantime, I'm going to contemplate purchasing florals and whether my UFO for this month truly needs dark purple/blue borders.

Happy quilting,
Katie
Posted by Katie at 11:15 AM

Oh Katie, what a splendid post! Your mind runs at a hundred miles an hour. I love the sheep quilt and I do like your grey fabrics. I'd be tempted to make a floral version but everyone's different. Lots of lovely greens for March RSC and your cats look great. Had to chuckle at the car conversation and those little pincushion are sweet. Not sure I'd make 900 3 inch blocks for a quilt either. Have fun with all your sewing projects.

Oh me! I'm weary already after reading about all your activity! I don't know how you keep such a pace! I could sure use some of your energy this morning!
Your new greens are really pretty, and the cats and sheep will be cute. ---"Love"

Didn't have time to read the whole post since I'm vending at a craft show and have to leave in 5 min. But had to comment on your DH's system to get ready to drive. My DH has the opposite - it takes him forever to get out of the car as he has to do certain things. I'm not even sure what because like you, I'm out in 4 seconds or less! What is with men?