What a fun day yesterday was!

I took my bin of purples... 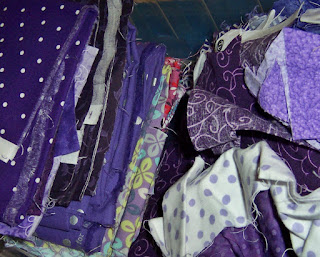 ...and my newly washed and pressed background fabric...

...and all the necessary sewing utensils, plus snacks and went to my guild's sewing Saturday.

I had hoped to complete at least half of the 13 cats I wanted to make from the Cat Quilt pattern for this month's Rainbow Scrap Challenge.  (If you do 13 per month for 11 months, you'll have 143 - I want 144 for the finished quilt.  Month #12 is finishing month, so you'll hear me complain about long seams in December!)

The first cat went together so fast, it took less than an hour! 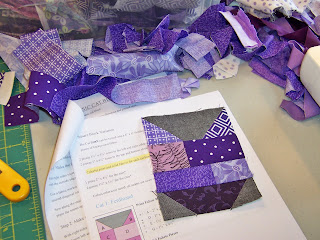 They finish 4x5" in this state, but I plan to sash with the grey so the finished quilt will be throw-size.

I was encouraged at the quickness and ease of the pattern and just kept sewing.  By 3pm, I had all 13 cats done... 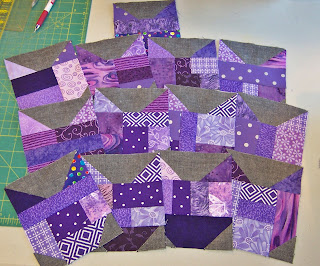 ...and a lot of scraps still left over...I think they might have multiplied while I dug through the bin?

I wasn't sure if the above photo would be good - I took it at the sew-in - and I wanted to have them all apart, so I layed then out on my sewing room floor this morning.  Skitter, one of my two black cats, one who rarely makes an appearance for anything but her dinner, decided to be helpful... 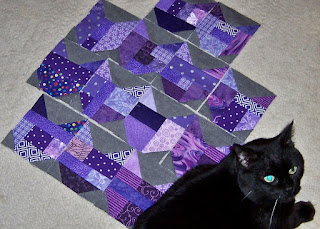 She's a beautiful, loving cat, but when we adopted her 13 years ago, all she did was hide under a couch for probably the first year.  It took about 6 years for me to be able to reach out and pet her and about 10 for me to be able to walk up to her and kiss her on the head.  She'll be friendly, but it's on her terms and if you breathe too loud, or sneeze, or move too quickly, she's gone.  Don't even think about picking her up!  Still, all these years later she's still this way - this cat has truly taught me patience.  She came to us with the name Skitter and it fits!

(And for all those of you saying 13 is unlucky - I also have two black cats and fear neither.)

In my scraps, there are a lot of skinny purple strips...

...these were sashings for another cat quilt I made years ago (no photo - at least not handy) and I cut just a few too many strips for sashing.  I've got an idea percolating how to use these in a dolly quilt because I'm sick of them and they're all wrinkly and too small for much of anything I usually would do.  But I have to laugh because this quilt was intended to be a twin-size and it turned out more queen-ish...and yet I STILL had too many sashing strips!  (If I can find a photo, perhaps I'll do a post about the quilt because there are some other fun memories popping up about this project.)

As I was sewing the cats, I knew my bobbin wasn't full to start with, so I kept wondering if I was going to run out.  I got all the cats sewn and still had bobbin thread left...I pulled it out and found this:

I don't think I could have sewn another cat with what was left on here - talk about good luck!  (See - 13 isn't always bad!)

With a few hours left, I pulled out project #2 - thrown in as what I thought would be an ambitious idea, but turns out I needed it!

I thought about what a few of you had said regarding those corners - the original had them in a light green, which I wasn't sold on.  I had thought of using grey, but wasn't convinced of that either.  Finally, I decided I would just use the same fabric as the center part of the block for the corners.  It seems a likely choice and while it will appear scrappy in the finished project, I don't think it was cause as much trouble for a final layout as if I did them random.

I got about a dozen or so blocks done - cutting each fabric and then sewing the corners. 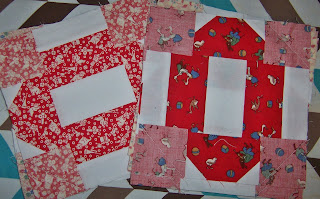 They're not trimmed or pressed back in this photo, but I'll do that when all of the blocks have their corners.

I had to giggle, though, at one of my quilty friends.  She pulled out a book and stack of gorgeous fabrics and told me to come here, she thought I'd like this pattern and book.  Know what book she pulled out?  "Scrap-Basket Strips and Squares" - the book this project came from!  She was doing a different project, but I started giggling and went over to my bin still hiding this project and pulled out the book.  Great minds think alike!

By this time, most ladies had left and the few who hadn't gone yet were packing up, so I figured it was time for me to pack up, too.  And now here I am blogging instead of sewing - I think it's time I go fix that!

Happy quilting!
Katie
Posted by Katie at 11:42 AM

Looking at how much thread was left on your bobbin, I think these cats blocks, number 13 and all, were meant to be. Apparently Skitter agrees! Great solution for the block corners on the second project. I'm eager to see how things look with the blocks all together.

Sounds like a fun weekend. Productive too! What fun cat blocks.

The cat quilt will be a fun quilt, love all the purple kitties! I don't consider 13 unlucky either, my youngest daughter was born on a Friday the 13th, so a great day to me! Your Candy Bracelets will be a cute quilt, too. It will be fun to watch these quilts grow!

You used a lot of lovely PURPLE scraps in those Cat blocks!! I, too, enjoyed a Sew Day with my quilt group this weekend. What FUN!!

You made a lot of progress,Girl! No doubt you had a fun time too! I'll be watching for your finish on both quilts. ---"Love"

That was lucky - just enough thread on your bobbin. Your purple-y cats look terrific and the chambray background works really well. Good choice. Scraps breed scraps that's for sure. I'm keeping my long narrow pieces for a scrappy string quilt (one day). I really like your choice of corner fabric for Candy Bracelet. Isn't funny that you both like the same book and quilts in it.

The cat quilt will be adorable and how nice that Skitter approved of it so soon! I love black cats, BTW. I'm also not superstitious as my best job started out on the 13th floor. Funny how no matter how many scraps you use, there never seems to be any decrease in them!