I dislike making resolutions for the new year.  I think I've covered this in past years and this year is no different.  But it does seem that if I make goals for myself and write them down, I do better.  Even better yet if I have an external deadline (like the birth of a baby)...  So while I'm not going to list my goals here, I'm going to see about finding myself a notebook and keeping that for myself.  I love checking things off lists, so perhaps this will help?

The one goal I will share with you - because it is quilt-related, like my blog - is that I hope to sew a LOT more this year.  In fact, I am going to try to at least do something sewing-related every day.  Even if it's just to tidy up my sewing room for a few minutes - something.  I have too many projects in the works and too many more I'd like to start.  And I'm going to try to do better about sharing them - a photo a day perhaps from my sewing room combined into a weekly post?  We'll see how it goes...

To start the year off, I decided to participate in the Merry Mayhem New Year's Day mystery quilt-along.  This is a mystery quilt project that is free only on New Year's Day.  Clues are given hourly for part of the day and then disappear at midnight.  I got a VERY late start, as steps one and two were given ahead (one was choosing and cutting fabric, two was making a lot of half-square triangles) and due to a mistake on my part, one of my fabrics ran short and I had to run out to get some more!  But you're able to print the clues, so I did, and I worked until just about an hour ago to get it finished.

I knew the name of the quilt was "Blowin' in the Wind" and two size options were given, but nothing more.

You need a light, a medium and a dark fabric.  I went through my stash and decided on an off-white linen-look print, an orange print and a blue polka-dot fabric.  I thought they looked nice together and the colors seemed to be of an equal color saturation, so no one was going to get washed out. 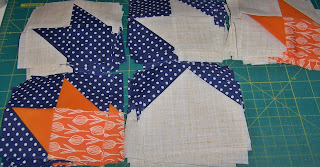 It was all going well, but there's a lot of orange next to blue.  Somehow I thought there would be less orange touching blue.  And then I sewed home plate.  So this quilt has now become the Tigers quilt...as in the Detroit baseball team.

This is where I left things Friday night.  I didn't really start sewing until after noon and all those half-square triangles needed squaring up.  Most were pretty close to right, but I know if I don't do that step, everything gets progressively worse and I end up angry at myself for not taking the time.

Saturday I was up and sewing early, though there were a few distractions...like having to eat and my "helpful" cats...  But by the end of the day, I had all of the blocks into rows! 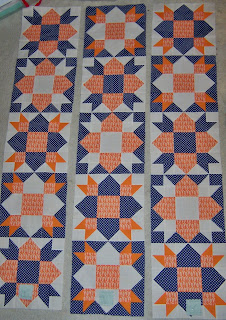 There are four different block types and for whatever reason, block C gave me more fits than any other.  Some of the blocks had seams nesting nicely, some did not.  Block C falls into the "not" category, but so did Block A and those seemed just fine.  I think I ripped at least part of every row-seam in every one of the C blocks at least once.  And they're still not perfect, but slightly off points will not make the quilt any less warm, so I've made my peace with it.

Today I was determined to get the top done.  After a few chores again this morning, I was back to sewing.  And I got the top together!  It measures 58"x70" and I do believe is going to get a Detroit Tigers print for the back. 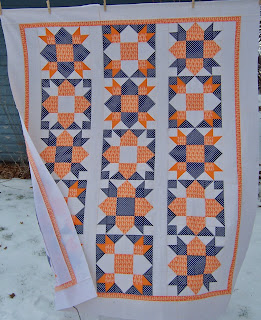 And here it is...blowing in the wind!  I stood out there for quite a while, hoping the wind would die down enough to get a full-quilt shot, but my fingers were getting numb and I decided this would have to do.  (Note to self: get better place to take quilt photos!)

You can see where I had to add an orange - the half-square triangle points are a solid that match the orange rather well.  With the print added in and from a distance, it looks not so matchey, but I assure you it does.  And I was amazed that my local Wal-Mart (which just started carrying fabrics again - woo hoo!) had a nice quality solid orange that matched.  And since it was the only place open at noon on January 1st (and just a mile up the road), I was very, very happy to find it.

I think I'll bind it in orange, but I do have enough of the blue to bind as well.  I think once I purchase fabric for the back, I'll see how things look...

I'm not entirely sure this will stay mine.  I like it (and the fabrics I used were some I liked from my stash...not just "whatever" leftovers), but I also have a feeling this quilt is meant for someone else.  I'm not sure who yet, but I hope I figure it out before I decide to use it!  (Of course, I have to actually finish it - quilt it - yet...)

So there you have it.  It's January 3rd and I not only have a first top finished for the year, but I've so far kept up with my goal to do something sewing every day.  I don't imagine I'll finish a quilt every three days this year, but I sure hope this means a promising year.  Or at least better than last year.  (From which I still have at least two quilts I finished and have to share...)

Your quilt came out great! Those colors would work for a Denver Broncos fan, too. Looks like a nice 'guy' quilt. I don't do mystery quilts because I like to know what it will look like before I start. It might be fun to just try it sometime though. I like your goal of doing something sewing related each day, even it you only have 10 minutes, you could find something to do. I don't like making resolutions or goals either. For me, something else always comes along and the goals are quickly forgotten. You have a great start to your new year, we will be here to cheer you on!

That quilt top turned out really cute; someone, whomever you choose, will love it. I just can't put one together that quickly. Resolutions don't work well for me either. I have tried to set one for myself this year, and I haven't kept it yet. ---"Love"

Fab quilt! Love the orange, blue and white. I'd bind in the blue but that's just me. No resolutions for me and lists - well I just end making lists of my lists. Good on you for deciding to do a little sewing every day. I hope 2016 is a better year for you too. I always enjoy seeing your projects.

What a way to start the year! Wow! A quilt top already done! I know what you mean about goals. I never liked new year's resolutions, but lately, when it comes to quilting, I find it does help to have goals. I'm still thinking about setting a goal to finish one row of Dear Jane each month, so that I will have all the middle blocks finished by the end of June. The more I think about it, the more I think it might be possible. Of course, things can change and you have to have a Plan B. For me, its pretty easy to spend at least a few minutes in my sewing room, because I get up early and DH doesn't, so I usually do some sewing early in the day. Plus, it helps to be retired. I am still amazed, however, when I think back to my working days, at how much sewing I got done then. Good Luck!