a top is born!

I may or may not have ordered two books last weekend to make two new quilts for myself.  (No one is pregnant or getting married right now, okay?)

So, just in case I did, I thought I'd work on getting one of the older quilts finished up.  At least to the top stage.

This quilt started out with a flying trip to a local-ish quilt shop before they closed after a friend sent me a photo of the fabrics she found while she was there earlier in the day.  I bought these: 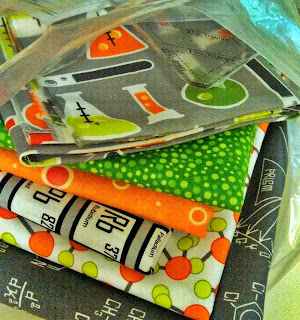 (See they're still even in the bag here!  That's how excited I was to take the photo way back then...)

So I thought and thought about a pattern and decided hexagons were the way to go.  It just fit with the chemistry-science fabrics so perfectly that I set aside my dislike of hexagons (in part due to the current craze over them) and went for it.

It felt like I cut about 4,000 hexagons and then I decided I'd better figure out how to sew them together.  One of the gals in my quilt guild had done a mini-presentation on a way to do them by machine (with 6" hexies, I knew I wasn't going to do English paper piecing on these!), so I dug out her handout and it didn't look too bad...

...I had to mark 1/4" from every edge so I knew where the intersections would lie.  That took a few months of procrastination to get done.  (I was finally forced to do it at my guild's show in March because we were trying to do things that didn't take up much space while the show was going on - we could sew, but were trying not to be our normal table-hogging selves this once!)

And then I took over the living room, er, design floor, and figured out a layout... 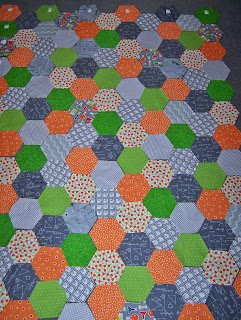 Labelled each row and even had a little diagram of hexagons and everything.  And set it aside.  Still not sure of this partial-inset-goofy seam thing necessary to get these together.

But I decided, just in case I really did buy those books, I'd better get going. 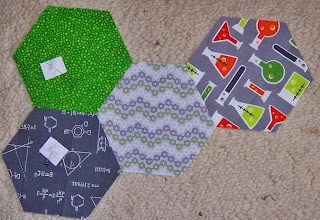 Hmmm...not so bad.  I mean, it's only a few seams so far, but it's flat, so way better than I expected already.  But it IS early.

About a row later, I realized I'd started sewing the rows together backwards.  Or something.  It should be okay, right?  Keep sewing...

...I got to about row 6 and was laying out the next row to make sure I had it lined up right and there were two oranges, identical oranges, next to each other.  Guess that "okay" wasn't quite right.  I had to move a few things a few times, but in all, it's okay.  It's not a true quilt without a few bumps along the way, right?

At the widest, I was sewing 11 hexies on.  With two seams on two sides, that's a lot of sewing.  And with this method, you back-tack and stop and start 1/4" from the edge.  So for a while, I was sort-of chain sewing, but eventually I got to a point where I couldn't.  That's where these little guys come in...

They'll be a doll quilt eventually.  They were going to be pinwheels at the start, but this struck me as more interesting, so off I went. 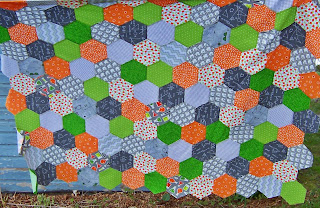 (It's a little windy today, but you get the idea.)

And those funky seams?  Not too bad at all!  I only had a few that weren't perfect and with picking out a stitch or two, they were fine.  I'm still not a hexie convert, but sure am glad I know how to do these seams now.

It's not as large as I had intended, but that's okay.  It's large enough to be a couch quilt and so long as it's usable, it's good enough for me!  And I already know how I'm going to quilt it!  (Of course, I have to screw up the courage to do so, but one hurdle at a time.)

And, just in case I did buy those two books, I went out and got this stack of beautifulness yesterday: 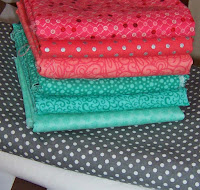 And shopped my stash just in case I actually bought two books and not just one... 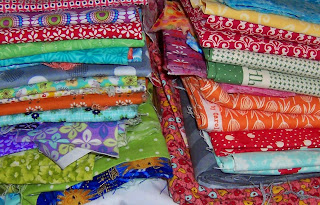 The fabrics in the hexie quilt are so cool! Perfect theme for you. It looks great and will be a nice cuddle quilt for your couch. The little blocks for a doll quilt are adorable, love the purple! ! ! Your new fabrics are so pretty, too. I can hardly wait to see what you will make with them! Have fun with your two new books! ! !

The fabrics in your hexie quilt are great! Good for you for tackling the hexies. It will make a fun couch quilt. AS for the books you may or may not have ordered - the fabrics you pulled just in case are just begging to be sewn up, so I hope the books arrive soon. It's very considerate of all your acquaintances to pause those "quilt gift" occasions so you can make something for yourslef. It's important to make yourself a quilt once in a while so you can rigourously test your workmanship's durability :)

Your brain amazes me with how it sees such cute quilts from those chemistry-science fabrics! They are perfect for the hexies. What you've created so far looks great. (I'm guessing you really did order those two books too!) ---"Love"

Those hexies are quite a bit of work but the effect is terrific. Your aqua/pink fabrics were popular colours in the two quilt shows I've been to recently but I took rubbish photos of them. I wonder if those books will arrive *wink*