the current project - a baby quilt

I've not been sewing as much as I would like to be (and part of my sewing efforts were to repair a rip in the couch), but I do have a little to show!

I teased with this photo of fabrics last week:

The pattern I'm using is one I picked up out of a $1 bin at a quilt show not too long ago.  "Polka Dots and Posies" by Terri Staats, published by Sweet Treasures.

As you can see, I didn't exactly stick with the color scheme, but I wanted a bold print for the border (the one on the bottom of the stack), so I had to work from there.

The blocks finish 16", so it only needs four blocks to make a 55" square quilt with all the borders, so there wasn't much cutting to do and I got to sewing pretty quickly this weekend...and then a little sewing... 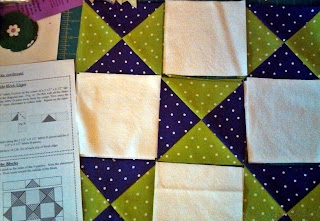 My lovely 8 megapixel camera phone cannot capture colors worth a darn, but it was handy, so forgive the color troubles from here on.  The first photo captured the colors rather nicely, so go with that.

So here's the main part of the block, but you can see from the pattern there in the corner, there's a bit more to be added to complete the block.  These are sewn together for the block center, so I moved on to marking for the outer part of the blocks. 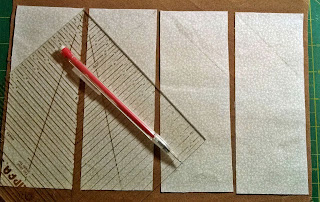 This process was a bit tedious and I'm very thankful I'm only making 4 blocks, as I had to mark 64 pieces!  I haven't sewn them together, but this involves the "lost corner" technique. 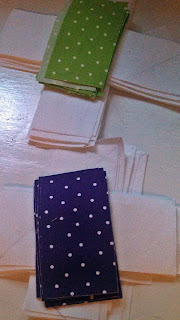 Ready to sew!  Maybe I'll get to them tonight, but I'm not having a very productive day, quilt-wise, today, so maybe not.  If not, they're ready when I am!

While I've been sewing, my "smart"phone is capable of streaming Pandora music.  I love Pandora.  Actually, I love anything where I can listen to music with a minimum of fools talking at me between songs.  This is an artist I found thanks to Pandora and this song was the one that drew me in.  I heard it and got chills.  His voice, his guitar...he's amazing.  I think I listened to it about 400 times before I really listened to the words, but that's the music geek in me...I hear the music before the words...  This is a more acoustic version than is on the album I now own, but I love it better.

I do so like spots! I think it's going to be a marvellous quilt. I've saved the link to your singer for a bit later.

Love the colors but really can't see what the blocks looks like. My son just introduced me to Pandor. Love it! The Moody Blues channel is my favorite!

I love the colors for the baby quilt, I can't wait to see progress. So far the block looks very fun. Hope you get lots of fun stitching time this week!

Those fabrics will make a really pretty quilt, but tell me, what is a "lost corner"? I don't remember hearing that term before. Much like you, when pretty music is playing, I can only pause and listen; my thought processes follow every note, even more than the words. I enjoyed the link. ---"Love"

This will be a pretty quilt. I hope you've had some time to work on it this week, or will this weekend, so we can see more. I may have to go find out about Pandora...