We've gotten a LOT of rain this week.  Some snow, but lots more rain.  A lot of areas in the state are under water.  Bridges have washed out.  Roads are closed.  Thankfully, my area has mostly been spared, but we don't have much in the way of lakes around here.  My parents? 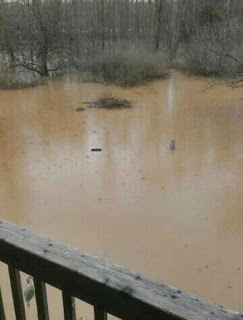 (thanks little brother for this photo)

This is the view from their deck.  Directly under this is the door to their walk-out basement.  Rather indoor swimming pool.  The water was near (over?) the door knob at its highest point.  My mom's sewing room is down there.  As is my dad's newly finished "man cave".  Things were floating.  Things were sunk and covered in silty mud.

My mom's friends, quilters, came to help rescue a lot of things that they weren't able to haul upstairs, as the water rushed in far too fast.  I got a few bags of things to take care of myself and the last load of things are in the dryer. 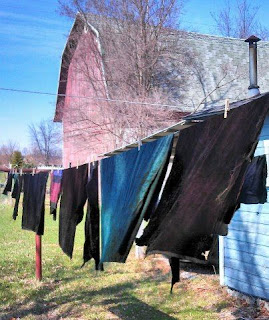 One of my bags contained velvet-ish fabric that I was afraid to put in the dryer.  But it's been a beautiful sunny day, so I dried it (rather quickly, to my surprise) on the clothesline this afternoon.  Boy does this stuff shed little bits, but only one piece looked like it shed to a point of being ruined.

I was pleasantly surprised to see white eyelet fabrics looking muddy and awful come out of the dryer looking like nothing more than a good washing had happened.  My mom wasn't sure how the other fabrics will fare, but I'm fairly confident she's going to have a lot more returned to her than discarded as ruined.

Currently she's at a quilt retreat and my dad is camped out at the home of one of my mom's quilter friends, who is also at retreat.  He's earning his keep by feeding her kitty, but will be working this week to get things cleaned out enough to restore power to the basement, get the furnace going again and figure out how the septic and drain field fared and hopefully get that repaired enough to be able to flush toilets again!  I feel for them and have offered my home for whatever they need, but it turns out my mom's quilty friends are amazing and took literally carloads of things home with them in the first 24 hours to launder and I ended up only hosting my mom's two sisters for a few hours, as they stopped here to meet up with my mom and join her on the remainder of the journey to the quilt retreat.

While waiting for her to arrive, we decided to head out to a quilt shop about 30 minutes south of here.  I took a side trip to get lunch at a drive in restaurant and we ended up taking so long there we never made it to the quilt shop!  One aunt ate an ostrich burger and took photos to prove it to her friends back home.  We asked if it tasted like chicken, as the joke goes, and she said no, but it was good anyways.  I wish they didn't live so far away because I think we could get ourselves into a lot more fun adventures if we were closer.

My quilt group also had our Saturday sew day this weekend and I took the block challenge blocks and my plan for setting them and worked on that.  I probably would have gotten further if I wasn't yakking so much, but that's part of the fun, right?

The darker blocks are all sewn together, but need borders. 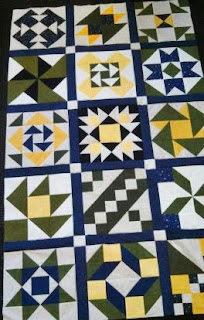 Taken with my phone, this isn't the greatest shot, but you get an idea of how it's coming together.  Just your basic setting plan.  It will be twin-size when it's finished.

And the bright with the green flowers is in rows. 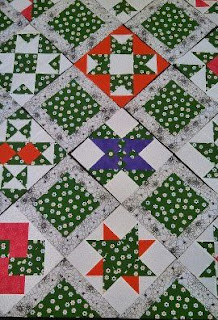 Again, taken with my phone, before I'd sewn anything together, but you get the idea.  I had to construct the setting blocks, but if that had been done ahead, I would have had the top minus borders together even with the too much talking.

You can't see it, but to tie in that one purple block, the setting triangles in the corners are purple with a white border.  I promise to get better photos as they come together.

So now I'm tired, have not accomplished all I should have at home today, but I've had a great weekend and spent a lot of good time with my family.  I forgot the photo of the birthday cheesecake, but it was yummy.  There's still a little left, so maybe I'll go take a photo now before I eat the rest of it!

Oh my, I am sorry your parents have had to deal with floods. What an awful mess they make of things. It's wonderful that you and their friends came to the rescue.

Both quilts look amazing! The colours are so vibrant and lively. The on-point blocks work really well.

It's ADVENTURE TIME! Well, maybe not. Sorry to hear about your Mom and Dad, but she has some excellent friends (quilters are like that, ya know?). Love how the blocks are coming together.

What a mess! I hope your parents are able to get things back to normal sooner than later. It will be quite a job. Glad fabric was saved. Hopefully any machines and man-cave electronics were as well?

I like what you've done with your charity blocks. They'll be cute quilts when they're finished.

I am so sorry about your Mom and Dad's flooding. I feel for them especially since I spent time cleaning up flooding plus sewer backup in my Dad's family room last week.
Your quilts are looking so good! Looks like you got a lot done!
Have a good week, with no more rain.

How awful that your parents' basement was flooded - but how nice that your Mom's friends and you helped salvage her stash. What a mess!! Was she able to save her machines? What about your Dad's "man cave" stuff?

Sounds like you had a good time with your aunts - boy, you guys could probably get into a bunch of trouble if they lived closer - ;))

And I like both of your quilts. The green setting blocks are a GREAT idea to tie all of those blocks together -;))

Oh, your poor parents!! And a brand new man cave, even. :( How wonderful that they are getting so much help recovering. Hey - I really love the green setting blocks you made - looking forward to seeing a full-on shot of that top!

I am glad you guys were able to salvage some of your mom's sewing room. Hopefully they will be able to get it all fixed without too much hassle.
All the quilt work is great;)
Happy Quilting!!