I haven't felt like blogging much lately, but if it's like quilting when you hit a slump, you just have to start somewhere and it starts flowing again, right?

So I'll start with the UFOs.

July's UFO I gave away to GrannyAnne. 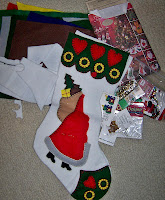 She was the only one of you readers crazy enough to want to take this on, so a few weeks ago I smooshed it into a box (guessing what would work from the pile of boxes at work was not easy!) and sent it along. 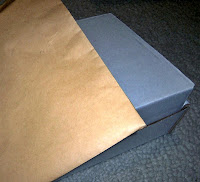 (That other envelope may look familiar to one of you blog readers?)

She let me know it arrived, so I'll be watching her blog to see how long it stays HER UFO now!  But once it left my hands, I no longer have control, so whatever happens, happens.

And then Judy drew #7 for the August UFO.

That would be my Toad in a Puddle project. 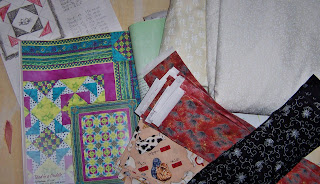 This project started in 2005.  I know because I have a receipt for some of the fabric purchased.  I was going to decorate my guest bedroom with an Asian-ish look and this would go on the bed.  Yeah.

The kitty print will be the focus in the center and the red and black will be flying geese to frame the center.

But I hit a snag.  I bought the white-on-off-white with Asian characters, but there wasn't enough.  A relatively thorough search of nearby JoAnn stores and I couldn't find more.  So I bought the other print.  Not enough of that either.  Of course.

Last Saturday, my sis-in-law came down and we both worked on quilts.  She's got two baby quilts to make, too, and wasn't feeling it, so we decided getting together would push both of us to quilt.  And we did.  It was a great day!

But there are 8 flying geese in each block.  And 42 blocks.  That's a LOT of pieces to cut.  (Please don't anyone do the math...I don't really want to remember how many pieces I cut that day.)

I decided to use both whites.  Use up the one I wanted first and supplement with the second.  I know they don't exactly match, but a quilter 100 years ago would have done just that and I wasn't going to chase around a fabric I already couldn't find in 2005.

(I have the receipt because I thought the number on there would help.  It didn't.  Apparently that is a bolt with BLACK characters on it.  Hmmm...  But it reminds me of the day I bought the fabric because it's hand-written.  You see, a big thunderstorm blew up while my mom and I were shopping.  We figured we'd shop and wait it out (like that's a stretch...killing time in a store that sells fabric...).  And then the power went out.  So they were trying to shoo us all out the door - no more purchases - but had no cash registers.  No credit card machines.  Just emergency lights and a bunch of crazy women!)

And if I hadn't already cut those strips for the geese and used the no-waste method (instead of the lost corner method), I probably would have had enough of the one fabric.  Of course not.  And now, after the squares are cut, I realized I probably could have cut the squares into triangles and only lost the color portion of the corner...ah well, hindsight.

So I've been sewing lots of geese.  Sewing the lost corners so I have half-square triangles instead of single triangles.

But it's a lot of work.  It seems to take forever. 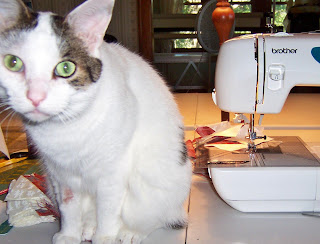 (The owie on her arm - she had her teeth cleaned and two pulled last week.  They needed to come out, but to do that, she had to be anesthetized.  It looks worse because she pulled out her own IV.  When the vet told me that, I told her "of course she did...we wouldn't expect anything less from Emma!"  She's doing just fine.  Obviously.)

I can't wait until the parts start becoming larger parts and fewer pieces, but for now, I still have the second side of the black geese to go...what's 42 times 8?  Oh wait, that's right, I don't want to know.

PS I also had the flu (the real flu, not the stomach flu) last weekend.  I didn't realize that's what it was until Sunday, when I spent all but about 3 hours in bed.  2 of which were miserable with me trying to convince myself I wasn't as bad as I was.  I missed Monday at work and am finally feeling better, but still coughing and taking it easy.

PPS The baby quilts (fabrics) I shared in my last post are still in the same state.  I decided to get a jump on the UFO...last Saturday...when I thought the crud was still just a cold and I'd be better on Sunday.  I hope to get to those soon, though!
Posted by Katie at 7:47 PM

Ugh! So sorry you got slammed with the flu. :( But good for you for moving this project forward! I think it's even nicer to mix the two background fabrics instead of just one. I'm totally in love with scrappy mix-n-match. The effect is so much warmer and more inviting than perfectly over-matched quilts. Don't worry a smidge about having a 2005 UFO - I know I've got one (well, a few) from like 1993 somewhere on my list! And how fun to have those memories all from a receipt!

Your UFO project looks interesting! I'll be watching to see progress with those great fabrics. I agree with LynnCC, the two different background fabrics will all lots of interest. Have fun! Hope Emma is feeling lots better, and you, too!

Sounds like you've been under the weather pretty bad! Hope you are feeling better soon. Talking about UFO's would make me feel bad too, without having the flu! ---"Love"

So sorry you got the flu. Blahhh
Glad you are feeling better.
Sounds like you have that UFO under control and moving forward. I can't wait to see it coming together.
Glad Emma is feeling well enough to help you. :)

not the FLU! Oh I am sorry to hear that! And the ufo, I am cheering for you. I HATE HST/FG/anything that is not square/rectangle....I will get over it eventually, but thats where I am sittign for now. Don't tell me how many you do in teh end. I don't want to know! =)

I hope you get over your slump. I fell into one yesterday when my bobin ran out and I am out of spares (I wind a TON at once) and just the thought of winding them is overwhelming. Maybe in a few days I'll feel up to it agian.

Oh, Katie, I so feel for you. I've had the flu - once! Never want to experience that again! Jump on that UFO with both feet. That's the way I do it! If you don't have enough of one fabric, substitute another, LOL! In the end, it will hardly be noticed and all people will see is a pretty quilt!

Glad to know you're feeling better. Summer illnesses somehow just seem even more wrong than just plain regular illness. I'm looking forward to seeing how all your fabrics come together. It's fun that you have documented evidence of when this project started!