With just a few hours to spare, I've finished my UFO for June.

It started out as a panel I wasn't sure I'd keep.  After sleeping on it, once the number was drawn, I decided to use the instructions I picked up (free!) with the panel, raid my mom's stash for fabrics and use it. 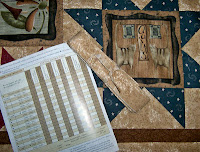 Each line represents a different fabric, listed by the manufacturer code.  Not color.

Each column represents a different piece of a different block.  Not grouped by block.  At least not obviously.

So I made up my own list, using bits and pieces of their block instructions.  Which weren't bad except that everything was the wrong size, with a step to trim them down.

I've not had this much trouble fitting things together in YEARS.  I'm not sure if it was me or the pattern, but I'm going to say it was the pattern.

And I know how to fudge a little to get seams to match.  This was more of an "I GIVE UP!" and the points aren't perfect and the seams might match.

The panel would qualify as "primitive" so I justify my slightly wonky seams as being okay.  Because they're "primitive" too.  Right?  Right.

Needless to say, this wasn't my favorite project. 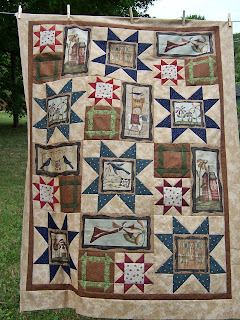 Fabric:
Panel from Red Rooster Fabrics: Whimsicals
everything else from here, there and everywhere... 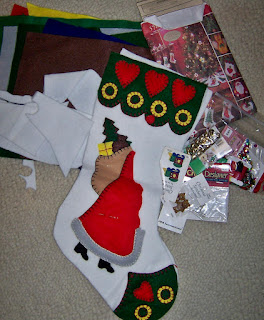 I've decided to throw in the towel on this one and it's not even July yet.
I don't want it.
I don't know what I'll do with it when it's finished.

Anyone out there who wants this (all the bits and bobs in the photo will come with it), say so in the comments and if there's more than one crazy crafter, I'll draw a name in about a week.

(If you don't want it, you can still comment...if you DO want it, please make sure that's in the comment you leave!)

(And make sure I have a way to contact you if your name is drawn.)

So that allows me some breathing room.  I feel like I haven't had time to sit down and relax in weeks...too many other things going on.

This past week I won a cookie competition at work with these tasties: 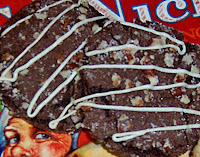 Caramel-filled Chocolate Cookies
Worth the effort.
Even better with milk.

The following day, a coworker and I headed out for fabric shopping... 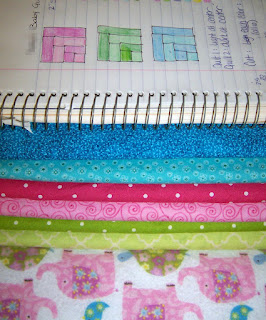 She's never bought fabric, much less made a quilt, so it was an adventure, but I knew it would be and prepared myself accordingly.

We had a blast.
But I think the lady at Hobby Lobby thought we were insane.
It took more than an hour and we changed our minds more than a few times.

But I like what we've ended up with.
It's not the plan we started out with, but it never is.

This will actually become two quilts because the gal who will recieve them (another coworker) is pregnant with twin girls.  She's due in October, but leaving work to be a stay-at-home mom in August, so I'd like them to be done before she's done.  Just to be safe.

The elephants will go on the back - flannel.

And today I'm heading to yet another coworker's house to celebrate her 10th wedding anniversary.

Until then, it's a bit too warm to press all those fabrics (folded fresh out of the dryer, but still a bit wrinkly), so I think I'll work on my Baltimore Album challenge block. 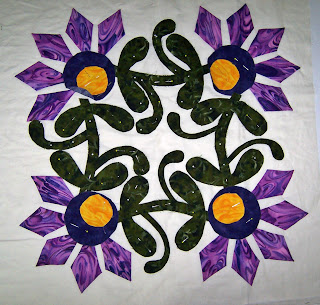 Same fabrics, different pattern from my first decision.
It's from a book I borrowed from my mom, but don't have any more.
I'll be sure to get the name to share by the time it's done.

But Thursday night I found out the block was supposed to be 12-24" not 24-36"...this is about 25" (to allow for the inevitable unravelling of edges), so I'll be okay, but how did I get that so wrong?  And it would have been easier to do it smaller, as I had to enlarge the pattern to get it this big...it was meant for a 12" block!

I can't believe next week we'll celebrate July 4th already.  Where did May go?  And June?  Did we have a June this year?  Time is flying and I'm struggling to hang on, but having a good time so no complaints!

You managed to rescue a difficult project and it looks great from here!

You might have had problems but the quilt looks great. I love the selection of new fabrics, very sweetie (candy in american. Just to add I don't need your July I made a list on wednesday of stuff I want to complete before September and its quite scary! Karen x

I'm worn out just reading your post! And I'm sure it wasn't you - it had to be the pattern! It turned out great, though. It doesn't look wonky to me. Don't put me in the drawing. I hope I don't have to make any Christmas stockings for a while. Don't blame you for taking a break. I had to take a day off from quilting and do a little piecing instead. I'll get back to it tomorrow.

Okay, I think the stocking is oh so cute. If there is no one who wishes to take this, i would love to! It is cool and rainy here so nice to quilt through the day.

You know, I really think you'd enjoy working on **my** UFOs rather than your own. There is no complicated cutting instructions, no --meh-- patterns. I'll just pop them into a box shall I and post them off? ann :-)

I'd be unhappy too, looking at those directions, but the quilt turned out just lovely. The panel designs look great with the stars and churn dashes.

Some UFOs were never meant to be finished. I don't want to be put in the drawing, but appreciate the time you already spent on that stocking with all the little parts.

I'm tired too; not sure whether it's because of all you've been through, or me! I do think you quilt turned out very well in spite of all your troubles. I too will pass on the Christmas stuff, but I'd sure like some of those cookies! They look delicious! I think a nap sounds better than working on that beautiful Baltimore quilt right now, but it IS going to be gorgeous! ---"Love"

Yea! Another finish and it looks wonderful! Even with all the problems, it turned out great! I will also pass on the Christmas project, my TO DO list is still long. It is really cute but I don't need another thing to do right now. Those cookies look sooooooo good, don't need the calories either but that's another story!

Congrats on sticking it out with June's UFO and for knowing when to throw in the towel on the July UFO! Either way - they are off your to-do list!

Your June UFO turned out pretty well considering all of the hassle with the pattern - good job! And good for you in knowing when to NOT work on something! I don't need it - but I'm sure your July UFO will find a good home. Besides, you have the baby quilts and the Baltimore Album block to play with - unless you want to make us all some COOKIES - ;))

Katie the quilt turned out really cute. We had a pattern for a snowman panel last year and the directions were kind of a mess too. You did an awesome job.
Your cookies look yummy.
I love your stick family!!
Relax and enjoy July.

Messed-up instructions are so frustrating to work with. Your quilt looks fabulous, though. Kudos on the UFO finish!!